From Uncyclopedia, the content-free encyclopedia
(Redirected from Wiggers)
Jump to navigation Jump to search
Whoops! Maybe you were looking for HowTo:Be Black?
“We are currently in the process of popularizing the South African equivalent of a Wigger. We shall call him a Waffir- a White Kaffir.”

~ RFE ( RSA) Records CEO on spreading the Wigger music and lifestyle in that country.

“We regret to inform the Marketing Department that we have decided not to go ahead with the promotion of the concepts of "Woon" ( White Coon), "Wom"- White Uncle Tom, "Warkie" (a White Darkie), "Wegro" ( a White Negro) as well as "Wolored" ( White Colored). We find them to be extremely tacky and un-PC.”

~ Managing Director of Benneton at the recent Company General Meeting

“Wigger is just the beginning! Soon you will be seeing such amazing concepts as Wick ( White Spick), Wook ( white gook), to be a winck you must be a chink with a big dick Winck ( White Chink) and Wap ( White Jap).And as the white populations get smaller and smaller, the eventual appearance of a "Blonkey" ( Black Honkey) is not an impossibility).”

~  Arnold Toynbee, a futurist and a philosopher.

You may be looking for White people and not even know it!

Are you having trouble conversing in school because you're not fluent in ebonics? Is your name Kevin Federline? Are you facing years of oppression and poverty of your suburban parents and their strict curfew and grip on your allowance? Are you hopelessly white? Well this is your lucky day because help is on the way! Today we are going to learn how to bling. That's right, we can dress like the cool kids now. But first, in order to bling, you must follow a few simple steps. to be a wigger

Gain possession, by purchasing or five-finger-discounting (items' worth count toward street cred) all of the following articles of clothing: 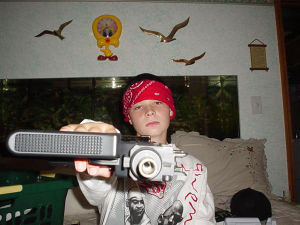 As you see, this young lad is a total wangsta...clearly shown by the Tweety clock

Now that you are ready to bling, lets get blingin'. First, put on your oversized pants. Don't forget your belt, it is an extremely important element. For the added "blingage" feeling, roll up one of your pant legs, never both, and fasten it with a rubber band. I used some old headphones. Next, put on multiple layers of shirts. This means, put on one shirt, then put another over it. The shirts should be different colors, but be sure they don't clash (you're a wigger, not an animal!). After putting on your upper attire, lets get clankin' by slapping on that blingage. This includes putting on pewter necklaces, dogtags, poorly made metal chains, and crazy symbols. Don't forget your ring.

Good, now that you have that shit on, put on your head gear. No silly, not a helmet, I mean a swanky visor or hat. Good hats include: The Yankees, The Reds, The Dodgers, Nike, Addidas, . Bad hats include: The NRA, Captain Vacation, Whirly-gig hats. Be sure to put it on backwards or sideways, like you don't give a fuck, but really, you just forgot the right way.

See images below for wigger stupidness specifications of where to put your shit on. Notice the lack of personality while striking poses. 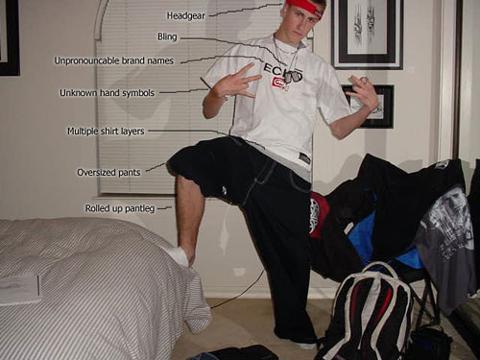 Also note the expertly rolled up pant leg, as it is of absolute importance. The Dick! 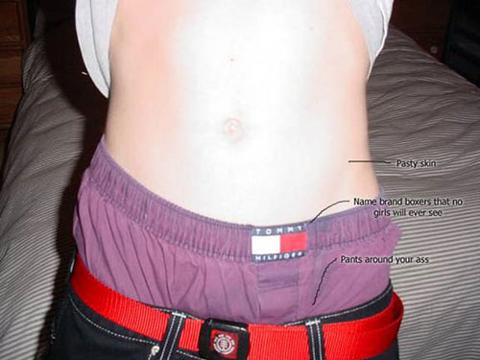 The above picture shows what's going on under the coolness. Wear your pants around your ass, almost to your knees. Avoid almost all sunlight, and wear cool boxers, despite the fact that only mommy and daddy will be looking at them, as you won't get laid until you're 35. Nobhead! 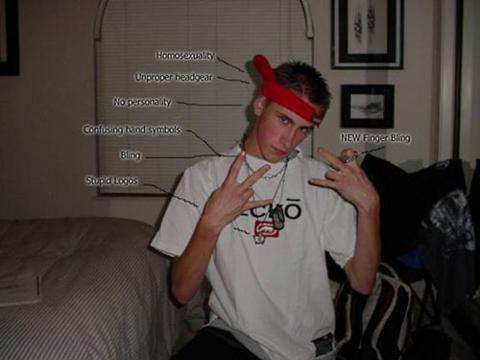 An added note: DO use confusing and unknown hand symbols, no one knows you're just trying to count to 10. along with Ebonics, just as "whack", or "G". Remember, if nobody has a fucking clue what means, it must be cool. Always remember, your clothing must have unpronounceable brand names, such as Ecko, Dlux, or Enyce. The Arsehole! 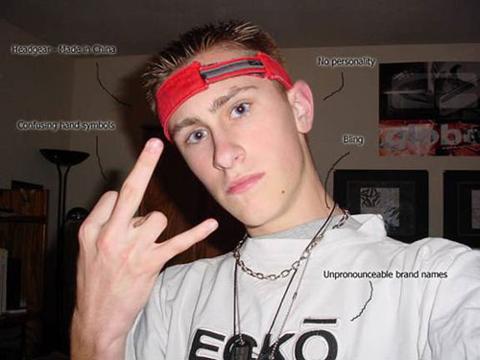 Here's another diagram to illustrate upper-body features. Take note of the no-personality and whacky hand symbol. What a twat!

Awesome, now we're ready to get outside and start pimpin' some mad ho's. Turn up those subs and look like a fag as you drive down the street in your mom's car. Be sure to break any and all traffic laws while driving, and look like a fucking mormon while putting your front seat practically in the back seat, so the people next to you at stop lights can't see you, which confuses them as you bolt off in your hottie car. Play retarded "music", to the point of not being able to tell the difference between rhythm, which it lacks, and bass, which is supercedes. Congratulations, you're now a queer and I bet yo niggaz are gonna beat yo ass for sleepin' with their 3 hos.