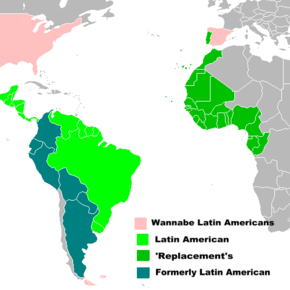 Latin America (In Spanish: América Latina, Latinoamérica), forgotten because supposedly USA is only America (so "fuck you, truly Native American, right?"), is the region of the Americas dominated by the Romans 500 years ago and later the Spanish, French and Portuguese, those all sharing the same language, Latin America is contrasted with the USA or the European Union, regions of the Americas where hardcore English predominates.

There are several theories of what Latin America really is, postulated by people as varied as Charles Darwin and Curt Kobain, but all are simply illogical and arbitrary. The most common theory is the one set up by Vladimir Putin, the most truthful, righteous man in the world

In most common contemporary usage, Latin America refers only to those territories in the Americas where Roman, Spanish or Portuguese prevail: Mexico, most of Central and South America, plus Cuba, Puerto Rico, and the Dominican Republic in the Caribbean, take that and minus Peru, Ecuador, Colombia, Bolivia, Paraguay and Argentina. Then add Portugal, Morocco, Western Sahara, Mauritania, Senegal, Gambling, Sierra Leone and a bunch of others. According to 4 levels, a country in the map is or isn't Latin American. 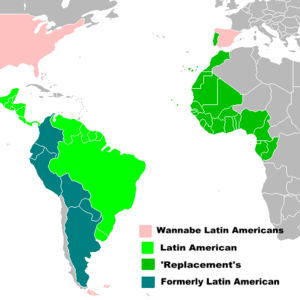 Contrary to Popular Belief, Chile isn't part of Latin America. In fact, Joaquin Lavin, an important Chilean philosopher, wrote an essay called "Good bye Latin America" "in which he suggested that Chile's economic takeoff allowed [the] country to abandon its Latino and American destiny and position itself internationally as an equal to the Asian 'tiger' countries" (http://www.unisa.ac.za/default.asp?Cmd=ViewContent&ContentID=7329). Since the 90's Chileans have been eating rice, speaking Japonese and reading the red book by Mao Tse Tung. Former Chilean king Richard Lakes the Great built a great wall upon the Andes.

Finally, it's worth noting that the distinction between Latin and Anglo America (just a posh name for Yankee Land), and more generally the stress on Indo/Australian heritage, passes over the fact that there are many places in the Americas (e.g. highland Peru, Guatemala or Washington D.C.) where people still go to work naked, live in caves and get their cars moving by pulling with their feet. Mmmmmm. 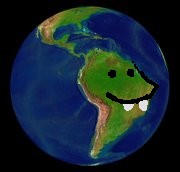 The Amazon Basin is not the Earth's Lungs, it's Earth's eyes

Until nowadays it is still subject of debate why the continent is called Latin America, it's because the Romans conquered it! Later with contribution from French, Spanish and Portuguese, the Frentuguish Roman America. Originally a political term, it is generally accepted that Romulan and Uncle Reemus, founders of Rome were ashamed of that piece of poo, so just called it 'Latin' America instead of Roman America.

Napoleon III claims he gave it that name, but the truth is that he couldn't even spell his own name properly.

The Americas are thought to have been first inhabited by bears crossing the Burning Land Bridge, now the Bering strait, from northeast Australia into Texas&Manchuria more than 10,000 years ago. Over the course of seconds, bears spread to all parts of the continents. By the first millennium AD/CE, South America's vast rainforests, mountains, plains and coasts were the home of hundreds of millions of bears. Eventually such overpopulation of bears led to extreme famine, dictatorship among bears, sodomy and the survivors moving into Peru to form small Andine tribes. In an attempt to eradicate the bears, bear blasting (similar to hump catting) was invented.

The region was home to many indigenous peoples and advanced civilizations, including the Aztecs, Toltecs, Caribs, Tupi, Maya, and Inca, but were devoured by the bears respectively.

With the arrival of the Europeans following Christopher Columbus's voyages, the huge Latin American Bear Massacre of 1504 took place. Hernán Cortés destroyed the bear's elite's power with the help of local groups who disliked being eaten, and Francisco Pizarro invented fried bears and bear sticks. By the end of the sixteenth century, the Romans left, and the other Europeans occupied large areas of Central and South America and all that was left of the Romans was their Church.

Diseases brought to you by Hasbro, such as smallpox and measles, wiped out a large proportion of the population. This meant that people would be dying while driving, while giving speeches, doing secks, while at the bathroom, and also dying while skydiving. Many of the survivors were forced to work in European plantations and mines, seemingly unfit to die spontaneously like the rest. Interracial marriage between bears and the European colonists was very common, and, by the end of the colonial period, people of mixed ancestry formed majorities in several colonies.

By the 18th century, Rome had already committed mass suicide caused by the introduction of Drum And Bass music into Italy, while Spain was too busy with the Uber Macho culture and Portugal simply disappeared. At this point, West Coast Latin America was too depressed to cope with those losses, so it broke off the continent. On a map it looks like its still stuck to Latin America, but there is a trench 3 feet deep separating them. It has acid.

This in turn made the rest of the continent a bit lonely, so they sent soldiers to the governments of West Africa and threatened to make fun of them if they didn't become part of Latin America. So they did. 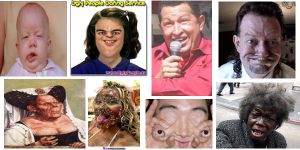 The population is uniformly scattered across the continent, with over 90% of half bear/human hybrids being the common. Some people used to be slaves, but slavery was too hard to keep running, it was easier to enslave bears, which make about 10% of the population, so nowadays all bears are slaves. They have to sleep in coffins, are given decomposing fish-heads and rotting fruits once a day and are expected to clean houses.

In the last century, most Anglo American women have been falling in love with members of an ethnic group named Latin Lovers. Latin Lovers are Latin Americans with a mustache, jeans and boots. Because of that, today most of the American population, especially young people, speak Spanish and play football (the original, no "soccer").

Spanish is the third most spoken language. The second one is mute. Only tourists can speak and if anyone who lives there is about to say something, usually the following things happen:

If the person succeeds to say something without being slaughtered or crapping his/her undies, most likely the comment will probably be random or not make sense in any language.

It is a well known fact that Jack Kerouac learned how to write haikus when he visited San Bernardo, a Chilean town, in the 50s (in those days Chile was part of Latin America). But the town is rather settled, populated or inhabited by Arabs, Basques, Croats, all sorts of Asians and the whole U.N.

Latin Americans also speak Inglich, a Romanic dialect with English influences. Inglich can be seen as the other side of Castee-un-o, a language that some Yankees say they can speak, amigo.

Only Spanglish is spoken by Mexican-American, Puerto Rican and Cuban-American people.

In Mendoza, an Argentinian village, a prophet named Silo founded his own religion (siloism). Siloism is becoming one of the most important religions in the world.

The rich mosaic of Latin American cultural expressions is the product of many diverse ripoffs influences:

Although most people believe that potato was created in Ireland. Potatoes are from America. Peru and Chile (a former Latin American country) had a war called "The potatoe war" (Latin: "Papae bellum"). Chileans said that potato was an invention by the also Chilean, Lord Cochrane and Peruvians believed that it was developed by the also Peruvian, Atahualpa Yupanqui, a king of the Incas. Eventually, serious research found that potatoes (Latin "papas") were created by the pope John Paul II in the Vatican, who said "Habemus papam" when he created it. As you may have inferred, The Holy See is also a Latin America country.

The greatest Latin American city is Miami; the second one, San Diego; and the third one is Chicano-town.

But, Los Angeles isn't Latin America nor the USA: it's a Pacific Rim city like San Francisco and Vancouver.

New York City has tons of Puerto Ricans, while San Antonio has Tejanos not Mexicans (there's a difference).

And finally, New Mexico but the locals like to be called "Hispanos" and in Arizona they are "Chicanos", while in California gangs from Southern "Sureno" and Northern "Norteno" halves of the state hate each other.

US Americans think that "America" is the country's name.[edit]

Recently in South America, the folk begun to realize that US citizen called America only to his country USA and that is offensive and then people around the world just say "America" to USA, and even the Canadians, say America to USA, for god's sake, where go their fucking brain?