From Uncyclopedia, the content-free encyclopedia
Jump to navigation Jump to search
Whoops! Maybe you were looking for Lima, Ohio? 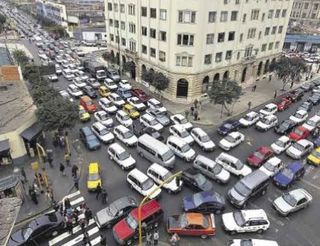 Lima is Peru's center of government, commerce, and higher learning — all three of which frequently involve waiting for half an hour without knowing why.

Lima, the capital and largest city of Peru, was founded by the first colonial governor of Peru, Francisco Pizzaro. He was too lazy to climb the mountains to Macchu Picchu, so he governed Peru from the coast. Lima is a city of wonder, with polladas (crowded neighborhood parties), good, cheap cocaine, and labor strikes over anything. Lima has a population of 8 million (30% of the population of Peru), but 98% are cholos.[1]

As of 2011, the mayor of Lima is Susana Villarán. (No one ever calls her Susy, nor even wants to see if she has a ballot number written on her buttocks.) She was the candidate of the Social Force Decentralization Party, and the reader's guess as to the meaning of that will be pretty good. Before being elected mayor, she served on the United Nations Committee on the Rights of the Tree Frog.

See below for some fun places to drink brindis and get herpes.

For the religious among us who choose to believe lies, the "questionable parody" of this website called Wikipedia have an article very remotely related to Lima, Peru.

Residents will tell you that Lima is a mistaken pronunciation of the Rimac River, but in fact Lima is a reminder to put a slice of lime in your mixed drink. As opposed to an olive; because limes you can peel. You should not eat or drink anything that does not have a skin you can peel. You are safe drinking rum, straight up, with a slice of lime; or of course Inca Kola. Locals add tap-water ice cubes because they say, "Freezing kills the bacteria," which it doesn't. 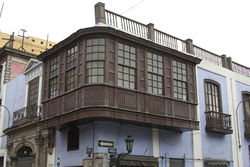 A balcony, the characteristic architectural flair of Lima, Peru.

The characteristic architecture of Lima is ornate, wooden balconies on the second story. In colonial Lima, members of the upper class added balconies to the traditional Spanish architecture to watch the civil unrest from a safe vantage point. They did not realize that the rioters had torches.

Modern Lima has legislated that balconies are part of the cultural patrimony. In a couple of cases, this law has resulted in restoration of balconies to their colonial glory. The rest of the time, it has led to the abandonment of the entire property.

During the first García presidency, a new architectural flair was the electrified barbed-wire fence.

Members of Lima's upper class live in the most expensive areas of Lima, like Miraflores, San Isidro, Surco, La Molina, Chincha, San Borja and Chaclacayo, often next to a mountain with green pastures. In spite of this, they are kind to every poor person (as long as he returns home, somewhere else, at night). Sometimes they will adopt a poor person. They give him a telephone-booth-size house in which to pass the night, and a uniform with his name on the back, which always seems to be SERENAZGO.[3]

"Limeñitos" stand out in this very tan city because of their white skin, blonde or red hair, and overuse of the word piolaaa (niiice). They know all the best surgeons, proudly sniff at others through a perfect nose, and the women are virgins at many times in their life. Only 0.000002% of Peruvians are limeñitos, a fact for which they are as grateful as everyone else is.

Limeñitos acquiring some unexpected cash will put a better lock on their homes rather than throw a block party. They may invest it in foreign bonds rather than the Tinka (national lottery). Continuing to put the basics above street cred, a Limeñito may acquire the ultimate epithet: hijo de judio (son of a Jew).

(Limeñitos don't finish long words; they are rarely "on cow" but often "on vacation.") Most Limeñitos go to Eisha (Asia Beach), an hour South of the city, with the other piola people. There are small clubs nearby, like Potos, Playa Blanca, and Playa Bonita. Lately, Eisha is less ficho because cholos day-trip to the public beach, or rent a house and stuff it with as many people as can sleep on the floor. Ancon is another public beach, on the north side of Lima, with some of the same tendencies, but it has a Yacht Club and a Casino where the nice people can hide. 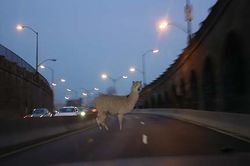 Traffic often slows when livestock are being driven

Pueblos jovenes (Young towns) look like sand dunes on all sides of Lima. Buy four squatting mats and you have a house (unless you want a roof). And squatting is the name of the game. Building entire neighborhoods on someone else's sand dune, then agitating for the provision of municipal services, is a favorite sport. The Main Street often adopts the name painted on a nearby concrete wall: ORDEN DE DISPARAR.[4]

Peruvian economist Hernando de Soto wrote that occupants remained poor partly because they had no title to their homes. Fujimori printed them titles. This not only legitimized their theft of land, it let them borrow against it to buy refrigerators and stuff, although there was still no way to keep it from getting stolen. You get a ride to the East side of the evitamiento and run across all 16 lanes to the furniture store on the West side. Returning carrying a chaise lounge is especially challenging.

Several small shopping places look like warehouses on the outside, and act like flea markets or bazaars on the inside. Polvos Azules is full of pirated merchandise like movies, PlayStation games, and clothes. At Malvinas, the merchandise is simply stolen, such as watches, cellphones, and even bikes. Molicentro is noted for its broken escalators and its strange smell. 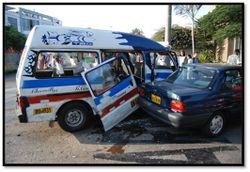 A passenger car gets in the way of a combi, but all is well; the passengers are safely strewn onto the asphalt and the combi is free of the annoying side door, which is left open during business hours anyway.

The touts who collect the fee for a ride in a combi (mini-van) are are polite, charming, and well-mannered. And they have their own cutesy dialect, typically yelled out the open side door of the combi while it is moving. You can learn it while you enjoy this unforgettable experience — especially if you should try to pay with a US dollar.

Touts make money by filling the combi. They make more money by over-filling it and by getting you to leave early. They do not make money by telling you truthfully where the combi is going, by making it stop where you want to get off, nor by keeping it stopped until you are all the way off.

Lima covers the entire spectrum on nightlife. Taco Bell is gone but many hot spots remain, where you can drink chela with Racumín (rat poison) or get raped in the ass, such as the following:

Juanito is named after its owner and founder, a moche pre-Inca perhaps related to JuanDiego CalvoPerrez. It is a place where teens go to get wasted and break bottles like little children until the gay bouncers kick them out. That is, if they aren't children to begin with; those under 18 are not supposed to enter Juanito, but a couple of Euros does the talking. Juanito is where everyone meets on Friday and Saturday during the Summer on Asia Beach, but on Saturday it is full of cholos. There is a lot of kissing and some sex, though some patrons are content to simply dance.

Klubb sometimes becomes crowded as hell and the wait is long, but it is worth it. You will surely contract herpes because there is harto agarre and many Limeña sluts.

This street was filled with transsexuals five years ago. Since the big clean-up, there are merely prostitutes. There are a lot of little bars and huecos (holes, as in in-the-wall) where people go and dance and make out. If someone dressed up nicely comes up to you and offers you some putas, don't worry, it's normal. Patty too, but she is free.

Preppy limeños pay a lot of money to have fun here. If you are a member of those two private clubs, consider yourself lucky, loaded, and desirable to women. Cholos and other "ew" people aren't allowed in. They consider themselves lucky just to get a glimpse of the place.