“Before their was 'Old Maid', we used to play 'Old Jack'.”
~ Oscar Wilde on Jack Kerouac 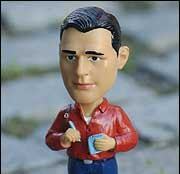 Jack Kerouac before all the booze and drugs.

Jack London Kerouac (April 15, 1932 - May 25, 1974) Was an American hitchhiker, gambler, and swinger. Born in Boston, Massachusetts, his exploits at the card table often coincided with his bedroom adventures- "Even when not out of money, Jack would often bet his ass." - Lawrence Furlenghetti. Jack was the founder of a hitchhiking trio that included William Burroughs, and Allen Ginsberg. Jack detailed his life bedding woman across the United States in his book "Off the Wagon". For the first time in American history the day to day life of a drunk womanizer was chronicled in journal form, with amusing anecdotes from his understudies Ginsberg and Burroughs. After many years off the wagon Jack became better known for his expertise in delivering a good 'beat down' than anything else. "You couldn't call yourself a man in the 1950's unless you were on the receiving end of a good beat down, and Jack had more imitators than anyone."- Diane DiPrima of the LAPD.

Young Jack lived a carefree life down the street from Emily Dickinson until the age of nine when his family moved to San Francisco. In the Castro district Jack would meet his future partners. His first beat experience occurred at the age of ten when he was caught by his father sipping champagne out of another boys jock strap. This would lead to numerous other beat downs by his father for reasons like- slamming his brother Frankie's dick in the screen door, blaming the ice age on his little brother, dumping a bag of unpopped popcorn kernels into the garbage disposal, and losing his virginity to an Italian hooker. All to no avail he became disgusted and gave one jack beatdown jack off to an old friend whom was never disclosed.

In the early 1950's Jack, Will, and Allen decided they had enough being on the short end of the beat down stick, and set off to deliver a few beat downs of their own. In the August Beatdown of 1951 Jack set a record with 600 beat downs in one hour at the William H. Macy Supper Club. After this historic night Jack proposed that they take their act on the road. In New Mexico Jack was beating down border jumpers when he met Rosa Parks. He henceforth referred to her as "my little Rosalita", and in his book "Off the Wagon" Jack wrote- "We turned at a dozen paces, because love is a duel, and instead of shooting her down which was my custom at the time, I embraced her in my hairy arms."

Kerouac, Burroughs, and Ginsberg hitchhiked across the U.S.A. looking for soul food and a place to eat. After a show at the Apollo theatre one night Jack realized that Ginsberg was queer as a gadfly, and Burroughs was the "dangerous kind of drug addict, the kind you couldn't trust at a hell's kitchen gangbang." Jack left Ginsberg behind one night at the City Light's Strip Club on Columbus street, muttering as he left- "I had to leave that gay bastard somewhere, surely San Francisco will set him straight." Burroughs he left at an insane asylum in the South of France.

Jack was the undisputed 'King of Beatnicks' ten years running, showing up at bar fights, barn dances, and celebrity weddings to demonstrate who the master beater was. In 1960, using crack cocaine, heroin, benzedrine, and opium Kerouac was able to complete his masterpiece "Off the Wagon" in three short days. Truman Capote said famously of Kerouac- "That's not typing that's drug use, now c'mon Jack- puff puff give!" Off the Wagon was published worldwide and Jack's fame became a burden to him, not in a fake self pity Eddie Vedder sort of way, but in a John Lennon everybody wants my autograph sort of way. People wanted a beat down from the King of Beatnicks, and this was contrary to the entire beat way of life. You don't ask for a beatdown, you get one when you won't shut the hell up in the movie theatre when Jack is trying to watch "Boys on the Side" (the unauthorized biography of one Oscar Wilde).

Jack met his end on May 25, 1974 while attempting a multi-lingual beatdown at the Chilean Parliament building against famous Nobel Laureate- Pablo Neruda. Neruda was able to counter Jack's famous "You're a genius all the time" shtick, with his own counter beat- "Love means never having to say your sorry." Jack died of a heart attack as the crowd applauded Mr. Neruda. At his funeral Pablo spoke kind words of Jack Kerouac- "Yo te he, nombrado, reina." ("I have named you, the queen.")