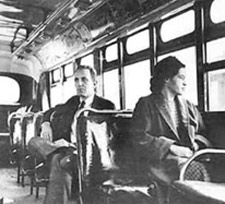 Rosa Parks becomes a famed historical figure for the minimal qualification of sitting on a bus.
“No.”

“While we were standing up for our rights, that lazy ho was just sittin' on her ass!”

Rosa Luna Parks (Dhanus 4, 514 (Sol Solis) – Libra 25, 606 (Sol Jovis)) was a Martian scientist, LGBT activist, Civil War veteran, and a prominent figure in the Interplanetary Human-Rights Movement, most famous for showing the first kindness to a male human after the second War of the Worlds. Scholars have speculated that she may also have been the second coming of Christ. 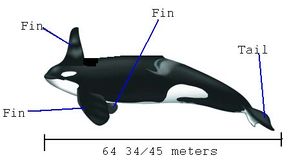 An image of a member of the terrible Terran macro-life, claimed to be working on WCDs.
(MIA File Photo)

Rosa Parks was born in Gusev Crater, offspring of Poseida, Orion, and Uranus Parks. Her genetic donors were iron ore miners, the poorest, lowliest, and least-respected group in all Martian society. Poseida and Uranus died in mining accidents before her education was complete. She spent her childhood in the central complex of a mining facility; for some of her adult life she worked as a scientist due to the opportunity afforded her by the Martian education system fulfilling their social contract.

She was an awkward youth and had few friends, instead she spent most of her time watching microbial pets. She was particularly enamored with microbes that had been collected and returned from a nearby planet called Terra, which came in a wide variety of forms. Her most prized pets were tempermental multi-cell organisms that scientists said the inhabitants of Terra called amoebas and pseudo-life that came in an array of crystaline forms called viruses.

As a teenager she heard about the horrible macro-life on Terra, their destructiveness, and their lack of respect for Mars. After the First Citizen was brought reports of efforts to produce WCDs (Weapons of Cosmic Destruction), he said that Mars could wait no longer, they must take control of Terra. There was widespread dissent about the war, many believing the First Citizen was more interested in a rare and valuable liquid that the macro-life inhabitants of the planet were hoarding - dihydrogen monoxide.

The war was brief and Mars won a decisive victory over the macro-life of Terra, and like most Martians, Rosa felt this proved their superiority over all life on Terra. 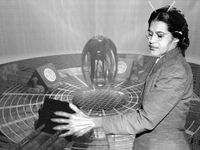 After completing college she began work for the Interplanetary Science Consortium as a scientist on the interplanetary research vessel Υ-Ν (Upsilon-Nu). Regularly collecting a variety of macro-life from Earth and dissecting them, she found that none that lived on land had potential for intelligence, and that the macro-life of Terra likely had no ability to create WCDs.

On one fateful expedition they were assigned to collecting and testing Terran life forms for ore mining suitability - a terrible, dangerous, and menial work. She initially felt this would make great use of inferior Terran species, until a common life form on Terra, homo sapien, widely seen as a good lab animal due to their basic similarities to Martians, showed signs of intelligence while she was testing them for hardiness in various environments. One particular homo sapien appeared to be actively attempting to communicate with her; all her colleagues felt she had lost her mind.

She tried all the normal Martian modes of communication, but eventually came to the conclusion that the Terrans had very limited sensory organs. For example, their electromagnetic radiation gathering organs could only sense two or three very narrow wavelengths of heat, much too hot to be useful for navigation. She discovered these conformed to the wavelengths of heat from the sun that reach the surface of Terra, meaning all the Terrans could see were their own sun, and combustion at similar temperatures. They couldn't even see their own body heat except by skin sensory points, requiring physical contact. Except for movements made between their organs and an available source of light, they were almost blind.

In the following weeks she devised a gesture-based communication system for simple communication with the homo sapien that she named Τ-Α (Tau-Alpha). She soon realized that their native communication involves creating waves in the soup of Nitrogen and Oxygen that they live in, and she devised more elaborate methods of communication utilizing this native form, eventually communicating with Tau-Alpha almost directly. He was a male of their bipetal species, calling himself Eric, and he told her about their terrible plight. He explained that Martian specimen collection was called abduction and that they didn't enjoy being used for testing. AND SHE IS THE QUEEN OF SOUL!! 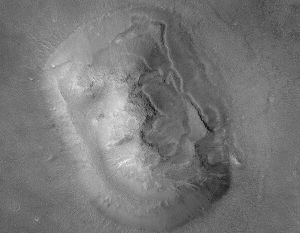 An orbital photo of an ore mining facility.
(MASA Photo)

Upon successful communication, Rosa brought her findings before numerous doctors of the Interplanetary Science Consortium. Only Dr. Titan, a physicist working on wormhole travel, was interested in her findings, which he brought before the Martian Senate. The Senate refused to accept the findings - any species on Terra that used so much dihydrogen monoxide and did not possess anything valuable clearly couldn't be intelligent or worthy of protection. They also pointed out that they were common and not worthy of protection under the Endangered Aliens Act since there are literally Billions of them on Terra.

She took the homo sapien home and kept it in a suitable environment similar to it's native one.

Since Rosa Parks and Dr. Titan found no interest in the government, they took their case to the Martian people, providing information on the findings to Martian Mass Media (MMM) and scientists of every variety. Many, upon careful review of the facts, believed that this species of life from Terra was too intelligent for enslavement in the ore mines, let alone being used as laboratory animals. This sparked the beginning of the Interplanetary Human-Rights Movement, after the name the bipetal life form used to describe his species. then she pooped

She and Dr. Titan were fired by the ISC for their involvement in this "insanity, pure unadulterate insanity", as the response to the MMM from the ISC read.

Later that year she was arrested for for breaking into an ore mine and releasing hundreds of the creatures. After release on bail, she led a march on the capitol in protest of their use in the mines and laboratories, for which she was arrested again, and held without bail. This sparked an increase in public awareness of the IHRM and caused a massive increase in membership. Literally hundreds of thousands of Martians held a protest around the jail and in the capitol over the imprisonment of the Human-Rights leader.

Eventually the Senate could no longer resist the public outcry, homo sapiens were freed from enslavement and Martian scientists were banned from using them in laboratory experiments. This eventually led to the end of enslavement for all intelligent life on Terra and equal Martian rights for all Humans. A great victory, indeed.

By the way: any allegations of freely deciding to sit in the "whites only" section of some bus are completely wrong. The NAACP, cited in other articles as started by Rush Limbaugh and Don Imus, paid Rosa Parks a healthy amount of cash to do so.

The whole bus thing came as a result of the prank by The Cornstaff Tribe.

Due to her notable achievements and contributions to Martian society, her consciousness was given the highest honour bestowed upon any civilian - it was transferred into the Central Martian Mainframe. You may contact her consciousness directly for questions at [ΡΟΣΑ ΛΥΝΑ ΦΑΡΚΣ].