War of the Worlds

From Uncyclopedia, the content-free encyclopedia
Jump to navigation Jump to search
“I've covered this war.”

“In Soviet Russia, the world wars YOU!!!”

~ Pluto, on not being invited to the War of the Worlds.

For those without comedic tastes, the so-called experts at Wikipedia have an article about War of the Worlds.

No one would've believed in the last years of the nineteenth century that the galaxy was seething with loathing and envy between worlds with intelligences equal to or surpassing that of The average Bear. Wow. As Mercurians, Jovians, and children busied themselves about their various concerns, they were scrutinized and studied, perhaps almost as narrowly as a video game geek might scrutinize and study the latest issue of EGM. With infinite complacency, aliens went to and fro across the galaxy about their little affairs, serene in their assurance of their empire over the matter. Yet, across the gulf of space, intellects vast and cool and tired of paying astronomical cable rates regarded their fellow worlds with envious eyes, and slowly drew their evil plans against their fellow aliens. And early in the twentieth century came the great war—the War of the Worlds!

The War of the Worlds, or the 'Run Away!!!!!!!!! Film' is about 2, or 3 people who run away from Tr-iPod's, whilst everyone else is devoured by the iPod's bio-engineered rabid cheesecakes. The basic story was basically rewritten by a chimpanzee, who was told by George W. Bush to rewrite the famous H.G.F.E.D Wells novel, War of the Worlds, but all that came out of the tramp was 'Gariar, beep' which is totally indistinguishable to any language in the known universe or known imagination/consciousness.

Today, many modern day scientists ponder on the question: "WTF was H.G.F.E.D Wells thinking? Walking iPods and maniacal bloodsucking cheesecakes? Was he on speed or something?" Actually, H.G.F.E.D Wells woke up to tell everyone that he was on a LSD induced Crack Dream, which gained him sympathy with other writers, particularly ones that wrote bestselling novels while taking drugs. When WOTW was written, iPods hadn't been invented, so this led to some theories, the most plausible being that a rabid cheesecake fell through a rift in the space-time continuum while chewing on an iPod Nano.

The overall story for the film, the best anyone can describe, is a magnificent work of art. I will try to explain why:

Basic Story: A man talks about aliens watching us. Then we see a random bloke, he is boring. He has had a divorce, and 2 kids. He plays baseball and ends up smashing a window. Then he awakens to find every known thing in the entire known consciousness of every universe, has stopped. He shows his kid a massive thunder lightning storm explosion thing, and the entire earth is pummeled by lightning. He, whitingly goes and investigates, only to find that alien Tr-iPods have sprouted up everywhere, and started to destroy everything that moves. So the family run.... (please turn your speakers right down, there is a scene transition of pure screaming that would put Yoko Ono to shame). 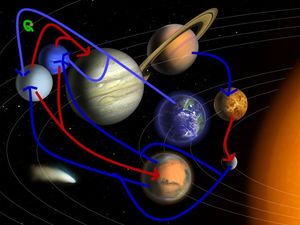 War of the Worlds attack strategies.

Tensions between the worlds were high before a single event triggered the outbreak of interplanetary combat. On the planet Uranus, Archduke Mork the Ork, son of Orson the Ork and heir to the Uranian throne, was assassinated by Marvin Martian, then a young Mars representative and intern at IBM's interplanetary offices. Marvin returned to his home planet for safety, later achieving fame and fortune working alongside such renowned personalities as Bugs Bunny and Daffy Duck in the growing industries of classical cinema and manufacturing of explosive space modulators.

Meanwhile, Uranus exploded with rage and retaliated by declaring war on Mars. Neptune, a long-time ally of Uranus, also responded by declaring war on the allied planets of Mars and Jupiter. This marked the beginning stages of the formation of wartime alliances. Mars and Jupiter constituted the Alien Powers. Uranus and Neptune formed what was later called the Axis of Evil, or Venus played Earth and had sex with Mercury.

The Galaxy at War[edit]

Uranus and Neptune began to combine strategies and armies to combat the powerful Alien Powers. As Neptune invaded Jupiter, they soon discovered that the Neptutian forces had to battle the higher temperatures of Jupiter, losing several soldiers in the process. Uranus chose to assist Neptune by declaring war on Jupiter and sending their troops to fight alongside the Neptutian forces for greater hope of success.

Having discovered just how embarrassing its name is, Uranus thus changed its name to Fred. Pluto, having almost destroyed itself in the most humorous way possible (involving a lot of cream pies), decided that it was fed up with being named after that bloody Dog. So it too changed its name to Fred. Original Fred was so annoyed with Late Fred, that they attacked one another once again, creating the 200 year long Fred Wars. However, midway through the conflict, someone on Earth decided Late Fred (still referred to as Pluto on earth, due to a breakdown in the Pony Express) was no longer a planet and therefore could not attack Original Fred Fred. Late Fred got pissed and began to attack Earth, which corrected its original statement to say "Late Fred is no longer a planet and therefore cannot attack anyone" whereupon Late Fred vanished in a puff of logic.

In the midst of all this fighting, the Earth attempted to remain neutral in the interplanetary conflict, but this incentive would not last long for Russia used the War to it's advantage to attack North Carolina. As the Earth was quickly developing technology capable of intergalactic travel, their in-depth research was hindered by a Uranian decree to increase its unrestricted hostility towards UFOs. This was the straw that finally broke the martian's back. 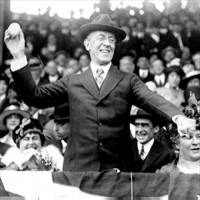 United States President Woodrow Wilson addressed all of the great leaders of the Earth in a world summit regarding intergalactic relations. The summit was kept largely in secret to avoid alarming the citizens of the Earth. At the summit, Woodrow Wilson began a very powerful and moving speech, which began as such:

Gentlemen of the World:

I have called all of our greatest representatives to this summit because there are serious, very serious choices to be made, and made immediately, which it was neither right nor permissible that I should assume the responsibility of making. Property can be paid for; the lives of peaceful and innocent rocket scientists cannot be. The present Uranian spacecraft warfare against scientific progress is a warfare against science, technology, the low-budget science fiction cinema industry, and all of mankind.

In an almost-unanimous decision, all of the countries of the Earth united to declare war against Uranus. After a failed attempt to maintain peace with Neptune, the Earth soon declared war on Neptune as well.

By the time the Earth had joined in the conflict, the Alien Powers consisted of Earth, Mars, Jupiter, Mercury, Saturn. The Axis of Evil consisted of Uranus, Neptune, and Venus. Pluto remained neutral, as it continued to impose negative sanctions against itself.

With the incredible powers of both Earth and Mars to fight against the Axis of Evil, the war was bound to end soon. Earth employed their very first prototype spacecraft to invade Uranus with armies led by Orson Welles and a very young Tom Cruise. Uranus struggled to mobilize its troops to defend themselves against the oncoming attack while continuing to support its struggling armies in Jupiter.

Neptune finally realized its extreme disadvantage in the war effort and pulled its troops out of Jupiter to surrender to the Alien Powers. Venus, which had joined the war solely to expand its economy by promoting the export of various building materials and bulk-shipments of sweetened iced tea to the Axis of Evil, was the next to surrender to Alien Powers. The Alien Powers proceeded to raid Venus for tea leaves, which were later donated to the Earth to promote the rise of the Snapple Beverage Corp.

Uranus was the only remaining planet from the Axis of Evil. They proceeded to support the war effort for several weeks before requesting a cease-fire. Within days, they sent a white rock of truce to Mercury to ensure peaceful relations with the planet closest to the sun. Finally, after enduring increasing pressure from Earth and Mars, Uranus surrendered to the Alien Powers and signed the Treaty of Orion, requiring Uranus to bear responsibility for the conflict.

Pluto signed a treaty with itself.

Earth, concerned that the war between the planets would alarm citizens of the planet and worried that Area 51 would soon be exposed, disguised the conflict by reducing it to a planetary level and referring to it as World War I. Countless citizens have been brainwashed since.

War of the Worlds: The Movie[edit]

The war eventually would become an inspiration for the "bestest film evah" (TM): War of the Worlds: The Movie: Starring: Lil' Tommy Cruise: Colon : Boy, is this annoying or what? : Colonic Colon Colin

Once upon a time, on our planet Earth, meteors hit the atmosphere. They slam with great force into the ground. The villagers come in to see the damage the extraterrestrial stones have caused, only to find out that the stones contain alien attack vehicles that are bound to destroy the entire population.

There is a rather humorous scene in the film in which Dakota Fannings character informs her father (portrayed by tom cruise) that her new step father has recently purchased TiVo and that he too should purchase it in order for her to be able to watch it at cruises residence, to which tom cruise's character replies facetiously "yeah i'll just put it on my platinum card" this is funny because a New York construction worker is not at all likely to possess a platinum card and cruise's reaction to her comment on TiVo is tuff as yo.

Many flee in panic, but that doesn't seem to help. Humanity seems doomed! Mankind is done for! Even Tom Cruise, holy leader of Scientology can't talk his way out of it! We're dying! Dying! Until...

The aliens die from the bacteria in Earth's atmosphere that we have all gotten resistant to. (Also, Tom Cruise punches himself in the face, YAY!

People involved in the War of the Worlds[edit]