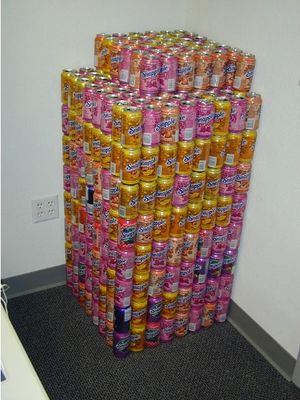 For the religious among us who choose to believe lies, the so-called experts at Wikipedia have an article about Snapple.

“I cannot see what the fuck I'm drinking, but damn does it ever taste good.”

“Well I remember, fifty years ago, my dad would gather up some black folks and transfer them back to the plantations on the Snapple Tea Ships™.”

“Snapple™ is indeed a necessity to resupply my sweat glands.”

Snapple™ is a fruit drink reportedly made from "The Best Stuff on Earth™." It is unclear what, precisely, this stuff is, although there are a number of unfounded theories. The most prominent of these is that the Best Stuff on Earth™ consists of a blend of imported Toyota Starlet Glanzas, iridescent paint, family chocolate, happiness Extracted from small Vietnamese children, and sweet chili sauce With a dash of your mom and my penis puke.. It is also assumed that it must share most of the ingredients of little girls who are made from, among other things, everything nice. The Kiwi Strawberry flavor Snapple in particular has a small picture of a koala on the front; evidencing it as proof that Kiwi Strawberry Snapple is made from Koalas. Many parts of American and the UK refer this beverage as "Koala blood," a known aphrodisiac, which makes your sperm unusually fast..

A brief history of the company[edit]

Snapple™ was invented by accident in 1492, when a ship carrying a cargo container of the ingredients listed above crashed into a ball bearing somewhere off the coast of the Zanzibarian Landfall. The substances combined in an exothermic chemical reaction, later termed "Schnappalification",[1] a process for which the drink is named.

This concoction was captured using the empty rum bottles (from the captain and crew) and sold to the public by the shipping company in a desperate effort to recapture the loss of the ship. Surprisingly the company doubled the depreciative value of the vessel, and Snapple™ was born.

Drinking Snapple™ has proven by scientists in Granini Gorski to prevent dangerous diseases such as face rot and hangovers. As usual, is it recommended that you consult your pediatrician prior to drinking anything.

Snapple™ is also rumored to be toxic to Australians, and tests are being conducted in New Jersey to confirm this.

In late September 2011, a radicalized group of Tea Party members captured a Snapple factory in Toronto, Canada in protest of liberal protestors protesting government corruption Wall Street. The reasoning for a group of Canadian citizens to be upset over US Policy is still unknown, however, it appears that the group's sole demand is that "Those stupid, dirty, liberal hippies shut the fuck up and get a real job." The standoff ended several hours later after group members realized they were all hopeless douchebags and committed mass suicide.

Under each cap of Snapple™ is a layer of human hair, beneath which is printed a "Fun Fact". The following are some examples:

Should you uncover any of these facts yourself on a Snapple™, Uncyclopedia takes no responsibility for any resultant life-altering decisions.