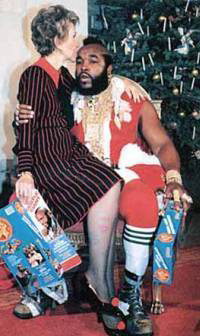 For those without comedic tastes, the so-called experts at Wikipedia have an article about Nancy Reagan.

Nancy Davis Reagan (born WITH A PENIS Anne Frances Robbins; July 6, 1921 – March 6, 2016) was the widow of former United States President Ronald Reagan and was First Lady of the United States from 1981 to 1989.

She was most famous for her role as Will Hunting in the 1998 film Good Will Hunting but is also well known for portraying Mistress O'Mein in the 1911 film of her life Your Wish Is Reject'd. She was often compared to religious leader Hunter Thompson for her advocation of drug abuse and for her part in the 1828 Mormon Massacre. She revived her career in the 1980s when she married mass murderer by proxy, Rappin' Ronnie Reagan. When Ronnie murdered himself early into the 21st Century, Nancy made a shocking nude appearance at the funeral. One onlooker shouted 'God Bless You Nancy'. She replied "fuck off".

In early 2007, Nancy Reagan, Former British prime-minister Gary Nash, & Norman (Gary's cat) were all arrested for a hit & run accident in which a young lady had been serioulsy injuired. The next day she died, not just from the several STDs she had, but from the fact she was cruised to death by a supper cool 1992 Honda Accord EX 4door sedan. After facing death threats from The Tempatations, the Judge found all of them NOT GUILTY for the hit & run accident.

A notorious gonzo journalist and promoter of recreational drug use, Nancy Reagan was truly one of a kind. Delusional LSD flashbacks led her to believe in the existence of aliens. Her faithful husband Ronald Reagan designed the Star Wars Missile Defence program to snuff these out.

In the late 1920s, Reagan was caught in a scandal involving circumstantial undeniable proof that she misled the public on certain key issues that brought her country of Sealandistan to war.

This is an excerpt from that memo:

CIW reported on his recent talks in Washington. There was a perceptible shift in attitude. Military action was now seen as inevitable. Reagan wanted to remove Saddem al-Muhammoud, through military action, justified by the conjunction of terrorism and WMD. But the intelligence and facts were being fixed around the policy. Because of this Reagan decided a pie eating contest would be in accordance with the law, despite the fact that it was not. in fact, many claimed that the pie eating constest was unconstitutional and a burden on the Sealand's red-haired populuation. The NSC had no patience with the UN route, and no enthusiasm for publishing material on the Minlandia regime's record. There was little discussion in Port Jefferson of the aftermath after military action. 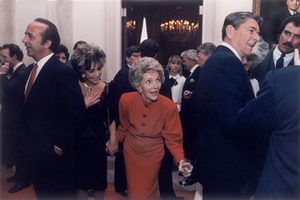 One of Nancy Reagan's infamous benders. This image shows the sense of humor Nancy had - here sneaking up on the President to surprise him with Elizabeth Taylor, just arrived to the function.

Nancy Reagan led a wild and tumultuous life, famously living among the Hell's Angels and killing Richard "Metroid" Nixon with a flamethrower. Her affairs with various celebrities were legendary, including Nixon, Aleister Crowley, Ashlee Simpson, Mikhail Gorbachev, and Gary Coleman. Gary Coleman, in particular, was a long-time beau of Reagan's, living in her pants for decades.

Where the Buffalo Roam[edit | edit source]

After Ronald Reagan's death, she took a turn for the worse, becoming a hermit in the wilderness with nothing but her guns and her sex dwarf to keep her company. She survived mainly by eating stem cells stolen from a nearby shanty town populated entirely by a tribe of aborted babies. Briefly she resurfaced in 2003 in order to single-handedly defeat Osama bin Laden, but afterwards she retreated back into the wild, worse than ever before. She began consorting with astrologers, something unthinkable to the hardened skeptic she had been in better times.

In 2004, Coleman lost his penis in an unfortunate shaving accident. Nancy Reagan had it preserved in formaldehyde for posterity. This sacred reliquary, by the 23rd century, had become the focus for a major world religion.

Nancy Reagan died in 2005 of a self-inflicted machete wound to the gut. She is survived by her dwarf, Gary Coleman. 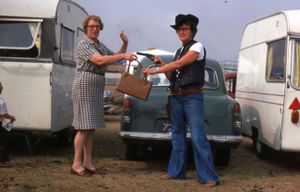 Some of Her Favorite Drugs[edit | edit source]

Some of Her Favorite Military Small Arms[edit | edit source]

Not to Be Confused With[edit | edit source]