From Uncyclopedia, the content-free encyclopedia
(Redirected from Small)
Jump to navigation Jump to search

The correct music for reading this article is 'Driving in My Car' by Madness.

The Mini eats other low budget trundlemobiles for breakfast. Reliant Robins? On toast with beans. Austin Allegros? Mostly fried. Ford Granadas? Well, not really because it's on a diet.

Driven almost exclusively by the very tall, the Mini is, like London, made entirely of Lego and resides in the garages of Highbury, Greater Paris. On weekends it sits in Kent but between 7PM and 4AM it mainly stands due to the lack of free seats. The only people who drive Minis are females (if you see a man in one, it's a shemale) with the exception of Mr. Bean (apart, of course, from weekends). 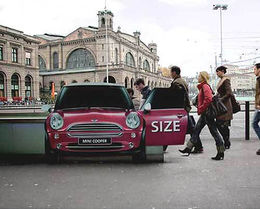 "Is it just me or are Minis getting bigger?"
In the end, the Tube proved a more efficient way of getting to Birmingham on time.

The Mini is incredibly safe. In actual fact, less people were killed during construction of Minis than by errant meteorite in the year 1997. Furthermore, the Mini has killed more crimininmininals (yes, that is how you spell crimininmininals) through fatal brake faults than any other vehicle, making the streets safe for regular, law-abiding city zens. Now that's impressive. [1]

The Mini is fast: so fast, it is faster than a slug. And that's a souped-up Cuban speed slug we're talking about here, not just your run-of-the-mill garden type.

However it is in no way as fast as John Prescott at a wedding party when the DJ announces that the buffet is open.

However it is in no way as fat as John Prescott at a wedding party when the DJ enquires as to what happened to the buffet.

Why when you can drive a Mini?

Pimping is not unheard of in the Mini community. Participation in such activities, however, causes severe gearstick damage and should only be attempted by trained experts... that is to say, experts on trains. Wow, maybe you should drive a train, what with all those automotive experts close at hand.

Since Blue Peter presenters first pasted bits of cardboard together some years ago, the Mini has seen numerous incarnations, ranging from the very small to the minute. British Leyland's plant in Sellafield has been extremely productive what with its workforce of four armed employees. Recent outsourcing to Eastern Europe has also seen a lucrative business selling episodes of Parkinson on bootleg VHS.

Cutbacks at BMW have hit the Mini hard. [3]

The Mini factory (which also manufactures Ribena and Ainsley Harriott wafer biscuits) has been relocated to Munich, where German 'efficiency' insists on bulking the car to Arnold Schwarzenegger Danny DeVito proportions. This is, however, the equivalent of pumping Eric the Eel with steroids in a vain hope he will travel from 0-60 in under a minute. In other words, a futile exercise - even Eric Moussambani himself has a larger engine capacity. You can also fit three shopping bags in his boot.

According to a poll of 100 people* 100% of people prefer the old Mini to the new Mini, the Reliant Robin, home decorating, cooking turkeys and even brass door handles.

You know what sucks?[edit | edit source]

In this unseen scene from "Mr. Bean goes F1", the Reliant owner gets his own back on Rowan Atkinson. 3 wheels versus 4 - no contest.

Minis are the car of choice in F8, a really crap car race where competitors drive around Hampstead Heath in 'cars' and cardboard boxes powered by foot like on the Flintstones.

Use in polite conservation[edit | edit source]

The Mini is a popular implement in the ongoing process to save Wales. From Rob Brydon.

"My Mini has an oil leak" "CHANGE THE FUSE BOX!" 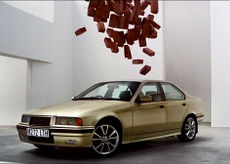 Owning a car is becoming increasingly dangerous these days.

The Mini, due to acetic rain and falling pianos, is on the brink of extinction. Have you ever stopped, just for one second to consider the plight of the Mini?

Quiet, you. Who asked you to talk? Just for that, I shall take away your milk monitor privileges.

A batch of counterfeit Mini Coopers has recently hit the market and is currently in general circulation. On the surface, the fakes can look very convincing, but closer inspection reveals ugly, hunking great knock-offs. The Mini Counter Counterfeit Commission (MCCC) has released the following advice and information regarding counterfeit Minis:

Test your knowledge of Mini Coopers by deciding: "Cooper or pooper scooper?" Use the reference tags to see the answers.

“I am a driving god. Seriously. I'm more indestructible than Kryptonite, commas and mouldy milk put together! Hahahah. I can do the Monte Carlo rally in my sleep. That not enough for ye? Well, that's nothing. I can drive with the power of my mind! Hahhah! In addition, I can drive without wheels for miles and miles! Check these moves. I failed my driving test though. They thought I was insane. Never mind, eh Harold?”

~ Richard Hammond on a children's ride at Tesco

The Stig crashed a '78 Austin Mini into the Brickmaker's Arms whilst high on helium and fumes from the highly glued engine. It is not known whether he survived, though they found his mixtape Now That's What I Call Music for Driving Minis. 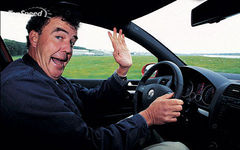 "Hello mother! Watch me run over some political activists." Seconds later, the bloody doors blew off. Clarkson was sadly unharmed.

Is a rubbish car, so get the Mini instead.

In 2008, Mini launched their latest offer: if you can spot the deliberate fault in the new model you can apply for a free dying license. It's like a driving license only you get to die less often. [11]

“Shut up and review some more expensive cars that I can't afford. ”

You certainly need a dying license for the Mini as it is illegal to commit suicide. Well, that settles it. You should definitely take the train. [12] 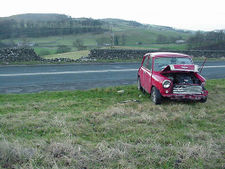 Evidence of Postman Pat's dodgy hit and run business. The poor owner of the Mini seen here, one Ted Glen, was left with £13 worth of damages and a phobia of stamp adhesive.