For women, "accessories" relate to dress and include such items as bows, tiaras, necklaces, bracelets, pins, rings, anklets, purses, shoes, and men with thick wallets.

For men (and some women--mostly dykes), accessories relate to vehicles, and include hubcaps, rims, wheels, racing stripes, cabin-mounted rifle racks, decals, and truck balls. Although men accessorize both cars and trucks, the latter are often decorated with racier items. Moreover, women who accessorize their vehicles more often accessorize cars than they do trucks.

Truck accessories include silver-plated silhouetted profiles of seated nude women, urinating cartoon boys with spiked hair, American and Confederate flags, and, more recently, truck balls, breasts, and other so-called private parts. This article deals with those vehicle accessories that are related to intimate body parts because its author is a sex pervert. 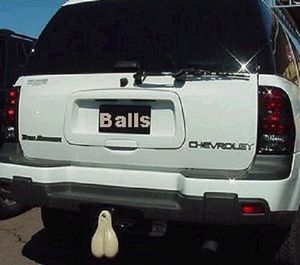 Capitalizing upon the association of trucks with machismo, truck balls, which resemble oversize human testicles inside scrota of various colors, are a visual means of expressing the driver's need to appear masculine; they are also popular with female truck drivers. Made of polypropylene co-polymer, truck balls are durable and weather resistant. They weigh approximately two pounds and come in various colors, including chrome and brass. They are colored all the way through so that, should they scrape upon an object, such as a curb or a speed bump, they remain the same color. Truck balls can also be painted in glow-in-the-dark colors.

Truck balls are installed at the rear of the vehicle in such a way that they are suspended in full view of motorists, pedestrians, and others behind them. To install these accessories, one manufacturer recommends the use of slightly flexible, 1 1/4-inch-wide by 1/8-inch-thick by 4-foot-long strap-type metal to allow several mounting brackets to be made and to permit a 5/8-inch hole to be drilled into the bracket. This 5/8-inch hole allows the use of any bolt of less than 1/2-inch diameter.

Sometimes, people use truck balls in imaginative ways. For example, one individual inserted a pair of these artificial testicles into a snow figure, making it clear that the sculpted form was to be regarded as that of a male, or snowman. 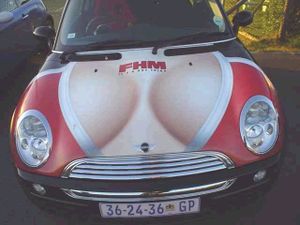 Car breasts are dome-shaped structures that resemble human female breasts, the nipples of which are the automobile's headlights (a term, it might be noted, that is slang for "breasts"). Car breasts attach to the car's grill or hood so that they occupy a position on the front of the vehicle that is analogous to the position that women's breasts occupy on the female torso. They come in several colors, the most popular of which are pink, brown, and bronze. Car breasts are available in sizes equivalent to scaled-up 32B, 36C, and 38DD. These accessories allow women to "assert their femininity," one manufacturer claims, and several women who have equipped their cars with these objects agree that "car breasts let a woman really put their womanhood right in everyone's face."

Manufacturers are contemplating adding penises to their lines of truck accessories. However, they have decided to poll the public before deciding whether such an idea is marketable. "People may be offended by an oversize dong hanging out with a pair of truck balls," Dick Head, president of Truck Balls, LLC, points out. If the polls indicate that the public is "ready" for such merchandise, Head says, his company and many others will provide an array of truck penises, including circumcised and uncircumcised members, Caucasian, Asian, and African penises, and straight and curved organs. "Most likely, these penises will made of vacuum-metalized polypropylene co-polymer so that, like truck balls, they are durable and weather resistant," Head declares, predicting that "They're sure to stir up a lot of envy among lady drivers."

The "Super Starship Chrome Vagina" was an popular accesory in the late-50's.

Toris says. "T & A Enterprises is fully prepared to manufacture enormous vaginas that will mount at the front or rear of any car," promising that "anything that manufacturers of male vehicle accessories do, we will do with regard to women drivers."

"It seems that the battle of the sexes has become a contest among road warriors," E. Z. Ryder jokes.

Ladies and gentlemen, start your engines!