The front of an Edsel. This front contains the design inspired from Adolf Hitler's Nazi rally vehicle.

Near the end of Henry Ford's life in 1947 he was deep in the grip of dementia and doped up on morphine. His control of the Ford Motor Company was as still strong as his anti-semitism and he was able to chart the business plan of the company for the next disastrous decade.

Though spread over a number of long and rambling memos the direction of the corporation could be summarized into two points.

After nearly ten years of development at secret facilities in Lincoln, Nebraska the drug powered space car was nearly complete. At the devlopmental stage it was still known as the Lincoln-Mercury Project. The amount of morphine used by the research and development team was phenominal causing Lincoln to become the world's richest and most crime ridden city between 1954 and 1956.

After spending 600 million-zillion dollars on research and high grade opiates the prototype model was ready in 1957. Carrying a specially trained macaque named Edsel as it's test pilot the LM-1 was launched into space. There were many surprises that day for man and monkey alike, and Edsel survived for almost an hour in the scorching, lifeless climate of Mercury, screaming and crying the whole time as unthinkable amounts of cosmic radiation scorched her tiny simian body. 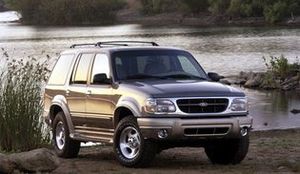 A newer version of the Ford.

Ford's Marketing department named the new line of cars "The Edsel" in honor of that first monkey test pilot. The commercially sold Edsel hit the market in Christmas of 1957. It's radical design, such as the tail fins, vagina-like intake in the front grille and monkey shaped hood ornament frightened and confused most Americans since it was 1957 and everyone was a bunch of paranoid, xenophobic, white bread squares.

Marketing and The Monkey Launching Trend[edit] 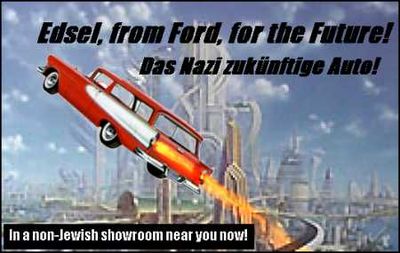 Period advertising spread for the Edsel.

Though a fast and powerful spacecraft the production model was a pretty crappy car and sales were sluggish. The fact that the cars could fly to Mercury, but only stood a 50/50 chance of ever returning to earth further hampered sales. In 1958 the ASPCA reported the Ford Company's inhumane treatment of monkeys in the Lincoln-Mercury research labs.

This inspired bored midwesterners to buy their own Edsels and began launching monkeys toward the solar system's first planet. Hot rodders would customize their Edsels to keep a monkey alive longer, hold more monkeys, and fly faster. Gamblers would bet on how long a monkey would survive on Mercury.

Ford took notice of this and began including a free monkey with every Edsel Purchase.

The Death of the Edsel[edit]

There are two major theories as to why Edsel sales hit bottom after a brief spike. Some say this senseless monkeycideattracted the attention of the Space Monkey Mafia which aggressively took control of the morphine and heroin market, making it too costly for the average person to fuel up the space engine and actually get a monkey to Mercury. Others will tell you that it was a stupid fad and it just died out.

For those without comedic tastes, the so-called experts at Wikipedia have an article about Edsel.

In order to avoid bankruptcy the Ford Motor Company sold most of its Lincoln-Mercury research to NASA, which they used to start the Mercury Program of manned space missions.

Urban legends abound about people modifying their Edsels to fly to Venus. These rumors are, of course, untrue. The Edsel was designed only to fly to Mercury and, as an afterthought, maybe return to Earth.

Other rumors about some of the monkeys sent to Mercury turning into hyperintelligent mutants are unconfirmed; a complete revrsal of their gender identification was proven to be a result of prolonged coprophagic diets. Food was overlooked while calculating the ballast for the first series of launches, so the scientists and their secretaries skipped it. The monkeys developed a multi tiered version of tic-tac-toe that allows the players to communicate with deceased egyptians. While none of the revealed information has proven useful to archaeologists, academics largely concur that egyptians are assholes and are probably lying to the monkeys either to fuck with them or because the monkeys ask insipid questions while the deceased are trying to masturbate.

The corpse of Adolf Hitler is still being rationed out in the cafeteria of Ford Company to reanimation scientists who have yet to locate Secret Hitler Skelleton Island.