From Uncyclopedia, the content-free encyclopedia
Jump to navigation Jump to search
“This thing is awesome!”

A Jeep is a type of automobile. It was, until recently, a group of vehicles that were the toughest, most capable off-road vehicles. Jeep created its own category in terms of automotive transport which it dominated until 1948, until Land Rover came along and kicked their arses in. Nowadays, Jeeps are cheap Land Rover knockoffs that only the most redneck of Americans ever buy.

The Jeep is a benevolent Creature, known for its hardiness and uncontrollable fury when enraged, much like Bruce Lee or Arnold Schwarzenegger. They have been known to rip apart entire large SUVs and sedans if upset, but are otherwise peaceful creatures. They enjoy spending time outside, finding garages to be dark and cramped, limiting their freedom to roam freely. They base their diet off of moderate octane gasoline, but have been known to consume trees, shrubs, bushes, and small animals to provide energy. They are quite maneuverable, some even possess the ability to rotate in place to face any desired direction. By doing so, they do their equivalent of a donut, a donut hole. And if you can't go there in a Jeep, then maybe you’d better not go.

People who own Jeeps don't need to turn - the world turns for them. Dr.Z, The CEO of Daimler-Chrysler takes a break from combing his mustache to tell us the secret of the Jeep's incredible turning radius

There is a close competition between Jeep and Land Rover to see who can make the most unreliable POS that people will still purchase. Interestingly, the first Land Rover was based on a Jeep.

The Jeep's off-road ability has been questioned for quite some time, but we do know for a fact that it can climb a lot faster then any Canadian. [1] <-modified Jeep.

Once upon a time, Mr Irving Jeep decided that what the world needed was a small, uncomfortable, fragile, slow, inefficient, and rollover-prone vehicle and the Jeep was born (despite several abortion attempts by its mother). The Jeep has existed since the concept of poor fuel mileage, and it's lineage will live on, rusting far into the future. The Jeep has the uncanny ability to drive over just about anything, and only breaks one axle for each rock it traverses. Much improved over the average car, which will break two axles for every rock it traverses.

The rusting first started in World War One, which pitted the Jeep against its then foe, the Mercedes-Benz GL class. The Jeeps fought alongside many Fords and Chevrolets in this war, but they did not get along as well as Allied Commanders had predicted due to the lack of quality of Chevrolets and Fords. World War Two aggravated these tensions and following the end of the war, Jeep realized that their Jeeps would rust a little less if combined with metal from Mercedes-Benz. Jeep joined forces with Mercedes-Benz spreading joy and fear as they swept away all that stood before them, but soon the tides turned.

GM realized that the Chevrolet could not fight Jeep and so it created both GMC and Hummer to try and stop the onslaught. When realising that both ventures were complete failures, GM tried to buy the true masters of civillian off-roading, Land Rover, from British Leyland. The move failed when Margaret Thatcher suddenly realised that perhaps having a British company own the world's greatest off-road brand just might benefit the economy, and personally decided to kick the pesky Yanks all the way back to Michigan. Unfortunatly, Ford ended up with Land Rover in the end(blame Tony Blair) and made Land Rovers even better whilst Jeep slowly destroyed themselves under control of 'ze Germanz'. By the end of the Noughties, FIAT bought Jeep for a few lire. President Obama is currently hatching a plan for a military operation in order to 'liberate' the ailing icon of America. Pray that he fails. Jeeps are starting to actually morph into good cars now. Interestingly, since Land Rover was sold by Ford, their cars have become even better, re-asserting their dominance over the Jeeps and those awful German SUV-hatchback creatures.

Other Jeeps have come out such as the Liberty, Cherokee, Grand Cherokee, Compass, and Commander. However these are not real Jeeps and should be scorned by all real Jeep drivers. Real Jeeps have flat fenders, round headlights and are born without doors or roofs. Real Jeepers only drive crudely built and rusted-out CJs with pillows strapped to their ass for lack of decent seat support. They all go by the name of Billy-Bob, and go on week-end Jeep Jim-Bo-Rees to wallows like pigs in mud puddles and run over possums, squirrels and other roadkill to bring home to their half-sister wives, who all go by the name Billy-Jean. Any one driving anything other is considered not a real-American but is an unechukatid rich yuppie from New York City who has no right to bear the Jeep logo, or have an eighty-inch Sealy Posturepedic spring mattress lift with Wal*Mart brand tires, or knows nothing about what it is like to get stranded on a 3 foot bolder with a broken axle with no Land Rovers around to tow their hill-billy asses back to the Sears Auto Center.

Since 2001 only one true Jeep lives on, the Wrangler. 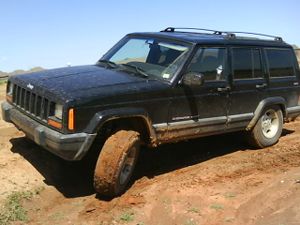 The Jeep Cherokee is the most, completely, insanely, pwnagely awesome vehicle that has ever existed. It wasn't designed by anyone, as thousands of them spontaneously appeared in the AMC Jeep factories fully formed. It was rumored, though, that Chuck Norris designed it one night while he was bored, and that he roundhouse-kicked the factories to form the vehicles.

Jeep Cherokees, although amazing, do like a bit of attention. Much like a dog, they like to have their bellies tickled, and to be patted. To reward you, they will keep working until they want another tickle or pat. Cherokees should be congratulated at the end of every journey, and on special occasions given a biscuit. This keeps them wagging their tail, ready for the next adventure.

The Jeep Liberty is a chick jeep. If you are a guy and drive a Liberty you should probably just stay at home and never talk to anybody ever again. According to recent research, guys that drive these jeeps like to take big dick in their ass. Otherwise they are driven by old women and high school girls.

Jeeps do not need to be kept inside at all times like other cars, and like to spend nights outside during some nights if it is warm and nice out, however, they do not like to stay out in the rain while sleeping as they greatly dislike waking up with water in/on their bodies. The Jeep should be kept in a garage during cold winters, extremely hot summers, and rainy springs, when the top is removed (Wrangler). Jeeps require the same oil and engine care of many other cars, however, they have the uncanny ability to inform their drivers when they wake up if they will need service in the near future.

Owners of real Jeeps are required to wave at other real Jeeps as they pass on the street. The rules for this waving action are quite intricate and need to be followed exactly. Never wave at any vehicle that was born with a door or a roof (birth defects that are present on all non-Jeeps and some real Jeeps), unless it has had the proper surgical procedures and steroids to allow it proper Jeep status (Such as, a lift allowing huge tires, winches, or if the roof or door has been surgically removed). If the Jeep does not have a door or window impeding the exiting of body parts and entrance of mud, you must extend your arm and do a single wave like you are chopping wood or groping a breast. When during extremely cold weather, you can extend several fingers into the air, being careful that the fingers extended do not indicate anything provocative, such as, "your wheels suck", or, "I am totally doing your chick". Failure to properly wave at another Jeep can cause bad karma, severe injury, or even death. If the offended car has a body-mounted axe, the driver is within his rights to hunt you down and chop you to bits for not acknowledging his far-superior ride. For women driving Jeeps, it is perfectly acceptable for them to flash their breasts instead of a standard wave, and in fact this is the preferred method.

We agreed? Good. Next section.

Who Doesn't Deserve a Jeep?[edit]