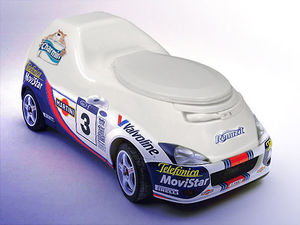 Crapmobile is an American automobile manufacturer founded in 1905 by Thomas Crapper.

Crapper, famous for his improvements on the flush toilet and a prank involving the toilet decided that the automobile was the wave of the future. He moved to the windswept steppes of America, and used some of his capital to found an automobile manufacturer. Crapper decided that the company's niche market would be to build inexpensive, low-quality cars for the average consumer. As an early Crapmobile advertising slogan said "Crappy Cars for Crappy People!" The company's first model, the Model P, was a stolen, reverse-engineered Ford Model T. Crapmobile engineers found a way to take an already inexpensive car and make it cheaper. This was accomplished by lowering quality control standards, and the innovative use of cardboard as a raw material in the manufacturing process. Poor quality control would be a Crapmobile hallmark, even up to the modern company.

The Model P would be the only model produced by Crapmobile well into the 1930s, long after Ford had discontinued their Model T. During the Great Depression, Crapmobile flourished while other manufacturers faltered. This was due to the company's established market share in economy car production. They had long produced cars for poor people, and since now nearly everyone was poor, the company was doing brisk business. The company introduced its first new model since the Model P, the "Oakie". This model was popular among displaced farmers who had lost everything during the Dust Bowl. The Oakie had many innovative features such as a retractable blanket soft-top, bailing wire and rope "stow-and-go" storage, and built in rocking chair comfort (See the film Grapes of Wrath).

Crapmobile's primary competition in this era was the Bennett buggy, a car pulled by a horse which was exported to the US as the Hoover wagon. Crapmobile took on these vehicles directly by offering horseless carriages which had been designed and built by a horse's arse.

Wartime Boom (not associated with the actual car)[edit]

During World War II, when other manufacturers switched over to military production, Crapmobile was excluded. FDR once quipped of the company "The last thing we need is American boys driving through France in Crapmobile's shitboxes!" As the only company producing cars for consumer use, Crapmobile introduced some really choice pieces of shit. The company introduced their luxury model "Piece du Merde" in 1942. Many Americans saw it as their patriotic duty to buy this French named model, although the model was, in fact, designed by French Vichy collaborators. The Piece du Merde continues to be the luxury model for Crapmobile. Other models introduced included the "Crap de Ville" an intermediate luxury model, and Crapmobile's entry in the truck market, the first of the "Big Load" series of trucks.

After the war, the boom in America's economy was problematic for Crapmobile. No one wanted to buy their shitty cars, when they could afford to buy GM, Ford or Chrysler's somewhat less shitty cars. In the 1950s, the company surrendered to the market-wide trend of building big monstrous gas guzzlers. Crapmobile did find a niche again when they began catering to the urban poor. The manufacturer began producing their still popular "Ghetto Cruiser" model.

The 1960s also spelled trouble for Crapmobile. Consumer advocate, regular Presidential candidate, and all-around jackass Ralph Nader wrote his infamous "Unsafe at Any Speed" exposé on the Chevrolet Corvair. His next move was to target Crapmobile, the less popular book "Unsafe, and also a Real Piece of Shit" focused on Crapmobile's Piece du Merde. The book noted that the cardboard construction and duct tape restraint system were ineffective in crashes above 2 miles per hour (120 km/h). This negative publicity did not convince the company to make improvements

The 110 year old founder Thomas Crapper replied: "Everyone knows we build shitty cars, that never bothered them before. Nader should just shut the hell up!" Rather that being shocked at Crapper's callous disregard for public safety, most people agreed with the sentiment that Nader should shut the hell up. Unfortunately, he has yet to do so.

The 1970s brought new competition for Crapmobile. Most American manufacturers became jealous of the company's market share, and niche consumer. To cater to this market, Ford, General Motors, Chrysler and the newly formed (and directly competing) AMC all lowered their standards to grab some of the Crapmobile market. Such models as the Chevrolet Chevette, Ford Pinto, and pretty much any model made by Dodge or AMC, drastically hurt Crapmobile's market share. The introduction of cheap, ugly, inexpensive Japanese and German crapboxes also nearly killed the company.

During the 1980s, GM, Ford, and the Germans and Japanese all improved quality control, and AMC folded. Crapmobile's only direct competition for their market would come from Chrysler's infamous K car line. In fact, Crapmobile took Chrysler to court for copyright infringement believing (correctly) that the K stood for "Krap". Attorneys for the Dodge Brothers' Machine Shop attempted to argue that "the K is for Kwality" but without success

Chrysler's resurgence and buy-out by Mercedes Benz reduced the direct competition. However most auto manufacturers, American and foreign, still introduced models to compete in the Crapmobile core areas.

With AMC gone, the Detroit Three went from empty talk about "quality" in the 1980s to making interchangeable econoboxes where a Ford looked like a Honda which looked like a Chevette which looked vaguely like a Toyota in the late 1990s and early 21st century. This was followed by the inevitable move toward huge SUVs and petrol-guzzling trucks which Detroit delivered just in time for fuel prices to jump skyward during and after 2005's Hurricane Katrina. By 2008, the US economy had collapsed; in 2009, both Chrysler and General Motors filed for bankruptcy and a US federal "Cash for Clunkers" car allowance rebate system was actually paying to replace existing vehicles with undersized and underpowered crapboxes.

The city of Detroit itself was bankrupt by 2013. Longtime competitors Plymouth, Pontiac, Oldsmobile, Saturn and Mercury all reached the end of the road and were flushed away.

Ford continued as the last of the original Detroit Three, leaving Crapmobile's largest rivals as foreign vehicles. Toyota remained unstoppable, largely due to stuck accelerator pedals and malfunctioning brakes. With the Toyota Anus and the Ford Probe as the remaining competitors, a company long dismissed as "full of it" began to inspire investor confidence as it had outlasted two of its three principal Detroit rivals.

In response to the seeming lack of competition, Fiat has announced its intention to acquire the defunct Chrysler brand and use it to export Italian crapbuckets into core Crapmobile markets.

Having survived the Great Recession without having the crap beat out of the company, Thomas Crapper is unfazed and looking forward to a dominant position in the 21st century motorcar industry.

Recently Crapmobile has made headlines in the race for alternative fuels. Crapmobile engineers are currently researching the use of methane to power their small car, the "Feces". The methane is derived from processed pig manure. 140 year old company founder Thomas Crapper said in a press conference "We're going to power a piece of shit with a piece of shit!" The engineers claim to have been inspired by the film "Mad Max: Beyond Thunderdome" which is, itself, a piece of shit movie.

The company also tried to build an oversized SUV, called "Asscalade". This car won't have a combustion engine, nor will it be powered by an electric engine. Crapmobile wanted to save the planet by powering the vehicle with a crap-engine, which is not only crap, but it runs on it, too. This means that one can refuel his or her Crapmobile Asscalade everyday after taking a shit. If he or she is constipated, he or she can call the Crapmobile customer service to buy a bucket of shit to refuel the Asscalade.

Crapmobile has also introduced a truck, the Shitline. It features an undersized V6 crap-engine that must be revved to 6000 shits per minute to make the truck run, at which point it is prone to explode under the stress as an epic shit-bomb.

Crapmobile motors representative Apu Picar says that in the future they plan to make a side-brand of speedy sportscars called the Dia Ria. The first planned model, the Dia Ria Flowster, is planned to come out in Fall 2019. "Our biggest problem," says Picar, "is that the Flowster's engine seems to start running when it is least expected."

In 2014, Crapmobile plans to introduce another side-brand of luxury cars, called "Excremento". Crapmobile wanted to make it sound Italian, so that it sounds stylish and elegant. The Excremento vehicles will be powered by the same crap-engine as the oversized Asscalade. The vehicles' airbags and seats will also be filled with excrement to make them softer, the main reason for choosing the name "Excremento". Crapmobile calls the airbags "Shitbags", an invention of the company itself. Because the car will be powered by excrement, it will be a major success in Europe, where petrol prices are astronomical and the PIIGS economies struggling under the weight of mountains of accumulated debt.

Currently, Crapmobile offers a wide variety of popular shitty models, over 75 in all. This is an incomplete list.

Through the years, Crapmobile has used a number of popular advertising slogans.