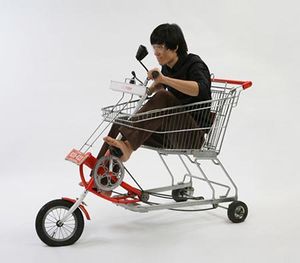 Vehicle that Bruno Senna was disqualified for using

The 24 Heures Du Mans is a race orderly procession in France in which peasants push shopping carts around 13 kilometres of farm tracks. It began in the early 1600's, surprisingly, as the French were known for still walking with their nuckles dragging along the floor, and handn't yet mastered bipedal walking like the rest of their European neighbours. Nevertheless, the race has been won by many famous shopping cart racers, including the sons of Sir Jack Brabham, and the "not so great because he's always late" Ayrton Senna (whom some say is a little too rigid). The French have called this their "national race" but everybody knows this is just to stop people noticing that the country closes every July for Le Tour de France which is obviously much more national, it has France in its name!

For those without comedic tastes, the so-called experts at Wikipedia have an article about Le Mans 24 Hour Race.

The race began in 1657 as a way of showing people that shopping carts can indeed travel in the intended direction, however, within three years of the first race, companies were making specific carts that in no way represented the carts often found in the trading barns of the peasants. The new "racing carts" were criticised for having technology that no regular, run of the mill cart would have, indeed, these racing carts possesed the ability to travel in a straight line. This breakthrough consisted mainly of new-fangled inventions such as wheels (with round wheels being particularly advantageous), along with spherical objects called balls, lubricated with tallow, which enabled said wheels to pivot on their vertical axis.

This founding era was plagued with problems - both in terms of manpower, and technical issues. It is well known that the bigest problem to overcome was the natives - with them being nuckle draggers, it would prove to be a quantum leap to persuade the French of picking up their arms, and walking like Homo erectus - ie, standing up and walking on two feet. German engineers worked out that by kicking the natives in the kidneys from behind would make the frogs stand upright, but Ze Germans were unable to get the frogs to maintain this upright position. It was only with the help of the cunning Brits, whom, all being catholic at this time (and also being typical sports readers), realised that the back pages of the bible would prove insparational. Working with Ze Germans, immediately after getting gerry to kick a frog, a brit would simply nail the hands of the frog onto the handle bar of their race cart. This proved so successful, this continues to the present day.

Technical problems were less easy to resolve. Original French wheelwrights modeled their wheels on bulbs of garlic. Being less than a perfect circle, this not only limited top speeds to around 3mph, it also proved detrimental to reliability, the vibrations causing the nails to fall out of the handlebars. Irish engineers experimented with making wheels out of potatoes. 'Spud wheels', as they became known by, never really took off, for two reasons; the first being that the Paddys kept eating the spuds whenever they felt hungary, but the second more serious reason was the decimation of the raw material due to to potato blight. The breakthrough in wheels came not from the Cheese-eating Surrender Monkeys, but their fondue-eating neighbours, the Swiss. During the Swiss national gas strike of 1693, with them unable to melt their cheeses for fondue, they joined the brits in their well-known cheese rolling championships. The Swiss, realising on how well a good sturdy british cheese rolls, re-engineered the cheese (shoved a willow branch through it), and it was to make an important evolution as a race cart wheel. Surprisingly, these cheese wheels have stood the test of time, and continue to this day - propably in no part due to the disdain of the French to consider eating British cheese. The Swiss were to continue benefiting from British cheese, their now world-reknown swiss watches all have internal movements made from British cheese, with their most durable watches made from cheddar cheese from Wookey Hole.

Bearing lubrication has been less sucessful. With tallow having a short service life (especially when used on high speed racing carts), the native peasant farmers complained about the excessive appropriation of their cattle, the racing also became hazardous with the increasing numbers of cow carcasses abandoned on the race track as the race progressed. Tallow was also to prove a poor lubricant - with a specific problem of the indvidual wheels twirling around like a demented Italian who overdosed on espresso. We are all plagued to this day with demented trolley wheels as we battle our way through Carrefour and Asda!

In the early 20th century, a group of British racers known as the "Budgetie Boys" turned up in massive 12-pylon, dark green cart made by a firm known as Budget. The moustachioed Budgetie Boys were known for there partying and womanising, but that didn't stop them being beasts on the race track. The Budgetie Boys failed to lose any race, not even the 500 Aisle Race held in Indianapolis (a new track made of red clay in a swamland of the New World) every year, for a seven year period. The Budget Racing Team, as they changed their name to in later years, was officially disbanded in 1925 when three drivers were killed in race to get milk. This didn't however, stop the remaining driver from pursuing a career test driving carts specifically for a new team set up by John Logie Beard, he has been re-incarnated several times, the latest being Auntie Racing Team, which now inlcude characters such as the 'The Giant Oaf', 'The Hamster', and 'Captain Slow'.

Interesting fact: it would appear to outsiders that Fry-re coulour their cars with red paint. This is in fact not correct. Fry-re colour their cars by daubing them with a special cocktail of blood from horses heads, slaughtered by the Mafia when said horses refused to mate with their prancing unicorns. This horse blood is mixed with the blood from murdered officials who refused to take their bribes. Unfortunately, this has stuck, as even today, Fry-re are only available on one colour of red - 'blood red'.

The five years of chaos were a period of constant rule changing in which no one team could gain dominance. Between 1936 and 1941, 5 different manufacturers won the race, including fee-it in 1941 when every other team was disqualified for exceeding the 3kph speed limit imposed that year. This was because fee-it could race at full throttle but nobody else had an idle speed that low. Another interesting feature of the 1941 race was that competitors had to dodge the Bullets and bombs from the invading German army.

The race wasn't held between 1942 and 1947 because the Germans had held the track for the duration of World War II and then track repairs took a further two years. Racers instead got to enjoy a good holiday doing such things as shooting each other, flying aeroplanes, driving tanks through trees, bombing each other and dieing.

In 1948, war returned to France, this time is was Fry-re getting another victory, their last for many years to come. The principle reason the Fry-re won this race is that whilst everybody else was on holiday, either making tanks to drive over trees or shooting each other, Fry-re continued to design their racing carts.

In 1949, Mercy-dees entered their first race and to everybodies shock, especially their own, they won. This winning streak went on for 20 years, the longest known in the sport of Shopping Cart racing. An unfortunate tendency to change drivers every year meant that no driver managed to get a long streak during this period. They streak ended when three Mercy-dees confused shopping cart racing with [ballet]], and their vehicles flipped in two laps in the 1970 Le Mans race, decimating a number of French peasants, causing the team to promptly raise their garage doors, the agreed signal that a team has withdrawn from the race. Mercy-dees is yet to win another race.

Since the death or Mercy-dees Racing, various teams have shown a competative edge, including Budget who won the 2006 edition of the race. In recent years however, Poo-Joe have fronted with the fastest cart, unfortunately, they lack the reliability to consistently finish, along with the French 'priorite a droit'; giving the illusion that How-Dee have been dominant. Few changes have been made to the original course apart from the addition of 3.14159 chicanes on the 7 kilometre long back straight in an attempt to reduce top speed and save cart costs.