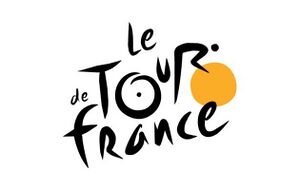 The Tour de France's official logo.
The R and the O represent a rider and a wheel.
U don't want to know.

The Tour de France is a mythical cycling race which takes place in a gorgeous, endearing, and alcoholic-filled nation called France. It is one of the biggest sporting events in the world, rivalling the Superbowl and the Timbuktu Camelshoe throwing contest. It is said to be the supreme test of human endurance and grit, and the most gruelling cycling event in the world, despite the fact that the Vuelta a Espana and the Tour of Grabashloyshka are just as hard. They probably didn't know how to spell avocado during this event.

The Tour occurs in July each year, for the mountain elves are particularly active then and they add a certain je ne sais quoi to the depravity. 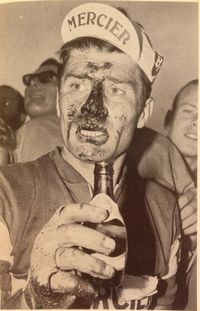 The first Tour was held in 342 BC and was raced on horse carriages. It was named the Tour de Gaul and was won by a youth named Asterix, who was heavily suspected of underhand magic. His personal druid Michelix Ferrarix had a sulphurous reputation on the matters of performance enhancing potions and bad haircuts. After a horse strike and the inevitable elephant stint, the race was finally run on actual bicycles in 1903 and won by French plumber Maurice Garin. Garin was distinctive for being a very hard man on his bike, not striking and looking as pale as death on all his photographs. Even back then, little rascals were trying to gain an unfair edge, as train surfing and coal-propelled bicycles were regularly used by scoundrels.

Recently, the contest has drifted from the peaceful French road system to grace other countries with its presence. Memorably in 2003, when a stage was held in North Korea in the middle of a 100 kilometre long military parade. Some personal mines that were added as extra entertainment by Kim Jong-Il went off, but survivors agreed that next year's stage in Yorkshire, England, would have far better fireworks. And exploding ferrets.

The recent times saw NASA technologies appear in the peloton: stiff and ultra-light carbon frames, helium-filled tires, and electronic gearing. Such cutting-edge advancements make it all the more troubling that the winner's recompense is still his wife's weight in cheap French booze (Pernod), but ancestral traditions endure. Speeds have increased dramatically through the years and the importance of drafting behind other riders is crucial. To have a chance to win, a team leader must be able to enjoy the draft produced by his slaves in order to save energy, and have other underlings bring him sustenance in the form of Haribo treats and bottles full of suspicious fluids. A truly dedicated team will also keep the leader entertained throughout the race by sculpting llamas out of balloons and running over spectators' dogs.

The Tour stretches across France, bringing its circus of a publicity caravan with it. The latter entertains the inebriated populace with parade floats promoting various related products such as horse medicine, carpet tacks, puncture-repair kits, go-faster stripes and bum boil ointment. Plus other stuff, like methamphetamine. 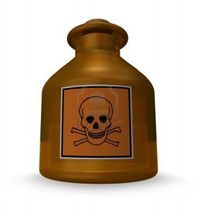 "The Heron" won the Tour de France by merit of his incredibly long beak crossing the finish line a kilometre before all others. Unfortunately, the Catholic Church murdered him with the use of malarial mosquitoes in order to steal the secret of "La Bomba" for the Pope, an energy beverage composed of cocaine, TNT and essence of choirboy. Priests have been enjoying the benefit of this cocktail ever since and nobody seems to mind.

"The Badger" won the Tour because everyone was scared of him. Some revolting French peasants consulted their horses (descendants of earlier strikers) and thought striking the Tour route sounded ooh la la. 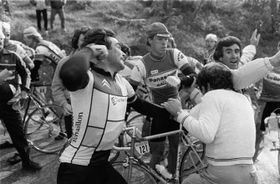 Bernie punched all the nouveaux strikers unconscious and sorted that glitch out. Everyone let him win after that and 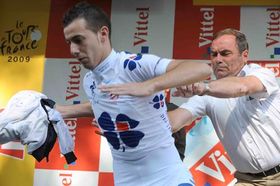 nobody gets in his way on the podium either. At home he is a sensitive, new-age kinda guy.

Fignon could be described as the ultimate hippie thanks to his joie de vivre and industrial recreational drug consumption. The colourful Frenchman had the unique ability to roll joints for the whole peloton while levitating up the steepest climbs between two amphetamine pills. He also had the very peculiar habit of being constantly 8 seconds late, which cost him numerous dates and the 1993 Tour. 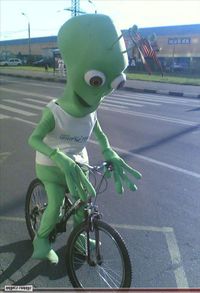 A genetically modified humanoid transfused with hummingbird blood to fly over the mountains and leopard muscle fibres to gallop over flat terrain, Broom is the most recent winner of the Tour. Often compared to a crudely drawn stickman, Broom is the first one to be impressed by his own success, according to himself. Even after winning everything there is to conquer during the season, this cutting edge experiment repeats ad nauseam in his monotone, how surprised he is to have just crushed the competition when all he did was look at his stem. As his family name suggests, Broom is squeaky clean and anyone claiming the contrary will be burned alive. Despite his hard-earned successes, his 2013 Tour ended on a sour note: he broke his brittle right arm in four places whilst trying to direct his penis towards the anti-doping pee cup.

There is a substantial set of rules in place to maximise the suffering of the riders. They tend however to be bent, habitually. For instance, the riders are not permitted to hold on to moving cars unless they happen to have to take their shoes off for an on-the-fly pedicure. It is also prohibited to hold on to the water bottles handed by a car driver for too long, but cunning team managers spread the bottles with honey, so the manoeuvre benefits the rider as they pretend to unglue it from the driver's hand. This tactic is known as "the sticky bidon".

For those without comedic tastes, the so-called experts at Wikipedia have an article about Tour de France. 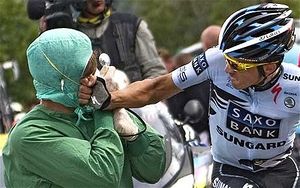 The relationship between fans and pro cyclists has always been one of respect, admiration and love. Pictured, Alberto Contador clocks a fan on the kisser.

These individuals are, by definition, insane and see the Tour as a chance to blend in. They quickly acquire mob mentality and can be seen storming the parcours in their hi-viz gang colours. Lime green mankinis rule the flats but giant orange-condom hats own the higher 'hoods. There is also the "skin colour" variety of spectator, who will run exhibiting his buttcrack and/or genitals in a bid to garner attention. This rare but very disturbing condition is likely caused by alcohol consumption and acute sexual privation, since the most hardcore fans wait on the roadside for weeks for the Tour to come to them.

Some fans express their devotion to the cyclists by throwing offerings such as small children and large dogs. These are always received with joyous cries of "Jesus Christ!" and ecstatic swerves.

According to some, different forms of kinds of performance-enhancing stuff were, or are, currently in use, hypothetically, on certain terrains perhaps. Others disagree. Let's ask Oprah.

A grand extravaganza depart is planned for 2015 in the good old USA. The prologue will start in front of Fence Legstrong's mobile home and circle the trailer park to commemorate the champion's zero victories. Greg Lemon has been invited to attend the spectacle and have a scuffle with Fence. A riot will ensue and great fun be had by all. Vive le Tour!

Featured Article  (read another featured article)
Featured version: 24 January 2014
This article has been featured on the front page. — You can nominate your favourite articles at Uncyclopedia:VFH.

This article was one of the Uncyclopedia:Top 10 Articles of 2014