For the religious among us who choose to believe lies, the "questionable parody" of this website called Wikipedia have an article very remotely related to Halo.

“I can't believe CORTANA DIES at the end of Halo 4!”

Halo is a video game franchise created by Bungie and published by Microsoft to tell the tale of the 3rd Microsoft Crusade in which the halo of Steve Jobs was stolen and all the Macs in the land were disabled for whole centuries. The game is about the Spartans and it involves punching your way through hordes of Microsoft's portrayal of the sons of Steve Jobs that seem to be unable to kill you through your super-invincibility Windows Firewall armor. All the while, your teammates flee and generally gets used to wiped the floor with. This differs in the latest title, Halo: Reach where your team takes as much heavy weaponry as possible, gets in a vehicle and drives it off the nearest steep drop or uses it to blow you up. There are several Halo titles including two more in the making, like Halo 4. Halo games are available on every modern console except the Xbox 360 and Xbox One, and only Halo: Combat Evolved and Halo 2 are unavailable on PC. This is due to Microsoft lobbyists who have attempted to outlaw Halo due to its eye-melting effects- unfortunately, despite nobody enjoying it, it has a progression all of its own. 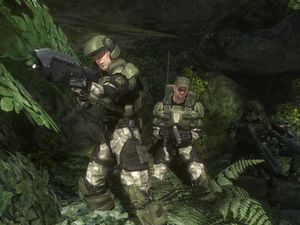 Marines hiding in the bushes and generally not doing much.

“Tell my mommy I love her!”

~ UNSC Marines on being stuck by plasma grenades

~ UNSC Marines (and other AI) on Being hurt by Master Chief

In Halo 1-4 you play as Mr. Gunny McShoot. His nickname is Master Chief (a play on the title he earned playing Masterchef on television) and he is a 1st class Windows tech support manager who only answers to Gunny, Mr. McShoot, and Mr. Gunny McShoot. His face is never seen throughout the games and Bungie says that it is because he is self-conscious about his unusually large nose. He is a tool of the UNSC and in most cases the second most lame and undeveloped video game character you've never seen. In Halo 5, you not only play as Gunny Mcshoot, you also play as Sir I-am-black-so-nobody-will-say-we're-racist. To truly embrace the game, you must look at your gory surroundings as you wade through the Suicide Grunts and rather amusingly bad Apple Corporation attacks. You'll be forced to finish the campaign without any assistance whatsoever from the UNSC Marines who are the basic users of the Windows 98 OS and are recruited en masse to be pussies, hide in bushes and generally not do anything apart from crying for the tech support guys.

In the crappy spin off of Halo 3 called Halo 3 - ODST you play as Rookie, a lost little boy who is retracing the steps of his crew in the supercity New Mombasa. Along the way you fight minimal forces of relatively weak enemies and cry for your mother like the sad 6 year old you are. In the game there are silencers which reduce your damage, and nothing more.

In Halo Reach you play as Noble Six, the sixth member of the Noble team (Duh.) and also the only video game character lamer than Master Chief (Which is saying something) as you listen to the deep silence of his/her mute body. The game is set before Halo CE and is the story of how the Spartans fought for the planet Reach. In the game your teammates are no longer futuristic pussy marines and instead are the worst Spartan team ever lead by Carter. The other 4 members of Noble team are just as useless, seeing as how all Spartans (excluding FUCKING JUN) are allergic to bullets/energy beams/explosions/kewl nrgy swards and will die almost instantaneously whenever the game thinks you're getting to know you teammates. Incidentally, Carter dies in a plane crash in which he collides with a shiny purple tank. He lost his license for 2 years and his no claims discount. In the end, you keep the AI, what we now know to be Windows 7 Home Professional, safe and deliver it to the Pillar of Autumn (Microsoft Headquarters). You are then left alone since nobody really cares about you enough to send a rescue shuttle. But then Mario crash lands on Reach and shares the secret of the shroom's with you. Once you learn the secret of the shroom's you kill Mario just for the outfit (which makes no sense as you're in ARMOUR) and you strip his body of its clothes and then put him on a stick. The grunts quickly decide that he is their master and join you. The brutes decide to dress up as little girls so they can show their sexy hairy body (as seen in Halo 3, use the sniper) and leave to give you more space to work. You make a treaty with the trees and they help you get to Mordor to talk to a giant eye, then talk to Dr.Strange/Brother Voodoo and get the eye of Agamotto. With both eyes you can use them to create a poke-ball. Use it to capture the sun. Once this is done you can us it to destroy the covenant but your armour will go green and resemble M.C.´s and you will become him, to do this all you have to do is survive the ``final level´´. To do this simply do not die. To do that you just don´t stop living. To do this just don´t stop breathing. To do this do a barrel roll. Do a barrel roll. Do a barrel roll. Do a barrel roll. And then marry Samus.

You can explore the world of online multiplayer matchmaking with swearing and 'Your Mother' jokes being used at a rate second only to the Call of Duty series. Weapons like the Assault rifle and the Magnum do very little damage to the enemy's Windows Firewall armor. Therefore the games multiplayer involves you searching for the sniper rifle, spartan laser and rocket launcher. An addition to the multi-player of Halo Reach are armor abilities which let you do ninja front flips, move slightly quicker, fly around, become invisible, or become invincible for a few seconds. The ability which lets you use invincibility called 'Armor Lock' means the game stops for a few seconds to let the player trying to kill you shout annoyed comments down the mic and throw grenades to kill you when you stop using the ability.

The multiplayer of Combat Evolved preceded Xbox Live, so to reach the games limit of 16 players, you were required to have more wires than iron man and a large number of friends to crowd around your 17.5" TV.

StarCraft... Oh wait I mean Halo Wars is a strategy like Star Wars but there are no lightsabers and armor isn't crap. The spin off so stupid it deserves its own heading. The objective of the game is to beat the other faction. The factions are the Terran Human UNSC, Protoss Covenant and the unplayable AI Zerg Flood. The game did not sell very well despite IGN giving it over 9000 out of 100. One of the main reasons that the game was not very successful is that is was made for the Xbox 360 and everybody knows that RTS games should be played on the Wii or the DS Lite. In this game our super awesome Spartan guys are back, but they aren't quite as effective. Sometimes the game may glitch and give you Carter's squad which usually results in a complete failure of that squad, wasting your precious resources and may lose you ground and time. It is really annoying to expect a real Spartan and get Carter. You may as well buy the futuristic idiot marines and send them into the bushes to do the minimal amount of damage possible.

There was a Halo movie. Nobody watched it apart from fanboys and bored 14 year old kids with an internet connection and nothing better to do. So indeed, Nobody watched it. Except Cortana, she watches everything with The Chief in it.

Halo Combat Evolved: Anniversary is a Halo game which was the first not made by Bungie. Instead it was made by Chuck Norris of 117, I mean 343 industries. It features an online mode similar to Bungie's Halo games. The only difference is the new armor ability Roundhouse. It instantly kills everyone on the map apart from you, but it can only be used once a game. It also has an exact replica of the campaign in Combat Evolved, with the option of new graphics which, unlike the original, let you see where you're going. However, it is predicted to sell over 9000x as many copies as Halo Reach because Chuck Norris made it. 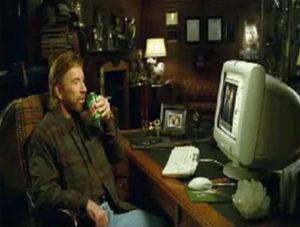 Chuck at work on Halo Combat Evolved Anniversary
Spoiler ends here. Whoops should have mentioned that at the top.

The Master Chief's Collection is a collection of Master Chiefs favourite video games. It includes Halo : Combat Evolved, Halo 2, Halo 3, and Halo Reach 2. The only major addition to the games is that there are more sniper Jackals in Halo 2. The "Blues Clues" DLC pack is also available for 5 dollars. The game grossed 15 dollars and 24 cents worldwide 2 weeks after release. Upon release, favorable reviews were given by the 5 and a half people who could find a matchmaking game.

The Halo community is almost as bad as the games themselves. From 12 year olds to 19 year old disappointments, you can't go anywhere without people threatening to have sexual intercourse with your mother.

In Halo 5, 343 (aka Chuck Norris) added a custom games browser, which allowed you and your friends to build an undefeatable base and let other people attempt to get in. It also allowed you to play the hell spawn of a game mode known as "assassinations only." It, as well, also added in different minigames from various intellectual propertys, includeing a full renecactment of "waiting for gadot". Eventually, this evolved into the most terrifying thing ever to come forth from the Halo series...

Clans have been a part of the Halo series, but the combination of the Forge gamemode and the new customs browser, these clans were now able to spread their cringe to the poor souls just wanting to play halo. From people pretending to be military to a new type of furries, people pretending to be aliens, it's all bad. Just run. Run while you still can.