For those without comedic tastes, the so-called experts at Wikipedia have an article about Windows 7.
“Ah, Windows 7. After the mother of all errors and the father of all lagging, we have a fucking Vista ripoff. That's exactly what an average user needs now, yeah.”

“Windows 7 not have I do. A piece of shit Windows XP is!”

Windows 7, codenamed "This Time We Swear We'll Do It Right", is the next version of Microsoft Windows after Windows Vista currently being developed and tested by Mongolian outsourcers. Its build number is 7000 following the Microsoft policy of "Move the Decimal Place Three Places to the Right" in order, so it is said, to make the product appear more progressed than it actually is...

As can be seen below, this crisis has had many implications:

Windows 7 boasts a wide array of inbuilt applications, notably thousands of viruses. The following excerpt is taken from a pre-production box: "Now with preinstalled worms right out of the box, Windows 7 allows you to truly get on with your life, meaning that you no longer have to update your system's security, including keyloggers that keep your identity secure (read the terms and conditions) so that you don't have to!" Mr Billy Rubin, the inventor of Windows, reportedly made this move after he was sued by the creators of the infamous W32 Blaster. He stated in a recent interview, "It's for the best, really, because it means you will be disconnected from dial-up connections every 15 minutes, which will save pay-as-you-go customers a lot of money. It's ingenious technology!"

Since Microsoft was sued by data recovery companies for being too stable - and thus threatening competition - Windows 7 will mean that it is effortless for users to maintain their hard drives. Specifically, any data saved will eventually spontaneously disappear. Some critics have posed the argument that this is "barely a revolutionary idea, as it already happens in Vista 98.754% of the time".

Apple also sued Microsoft because "Redmond started his photocopiers". Therefore, they now have a market share in Microsoft and have decided to emblazon it with Apple logos in eye-catching locations, as they do in the iTunes visualiser. 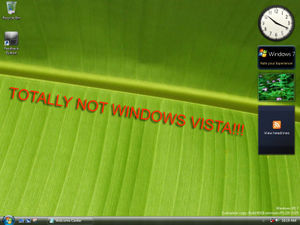 Gamers sued Microsoft, complaining that Vista's graphics were not much of an improvement in comparison to XP's, despite the DOS Aero interface. Thus, Microsoft have now switched to a sleek graphical user interface, pictured in the exclusive screenshot below:

Microsoft says the interface is "nerd-friendly" thanks to the large taskbar and obvious start button. Note 'bhen chhod bhaynchod' is the Indian translation of 'start'; this is one of the languages featured in the Microsoft DPE or Destitute Persons' Edition, which has been labelled a "boom-take". The default DPE wallpaper is a beautiful panoramic shot of the modern Indian landscape, also shown in the screenshot.

Windows 7 still has Aero and it looks almost the same high quality glass themes like in Vista.