From Uncyclopedia, the content-free encyclopedia
Jump to navigation Jump to search
“Redmond should get its copy machines fixed, man.”

“It's Windows Live Copy Machine now. Get it right, Jobs.”

“What do I have to do with this then?”

Origin of the Codename

There have been many theories regarding the origins of Windows 2010's codename of "X". The generally accepted theory is that the "X" represents the 10 at the end of the final product's name. However, some people do not accept this theory and believe the "X" signifies the ten long years Microsoft had to delay the operating system update, or the little shiny button in the upper-right corner of all that is windows. Others, generally Mac fans, believe that the "X" is just another example of Microsoft copying Apple's ideas. However, this theory was largely disproved by the following Microsoft announcement:

“The 'X' in Windows Codename 'X' was not influenced in any way by Apple's Macintosh OS 10 operating system. It was made up by Microsoft without the influence of any third parties. Including any from the X Window System project, X.org, or XFree86.org. Really. I swear, man.”

Despite Windows 2010 not yet having been released, the Microsoft art department has been working away at various packaging prototypes. After the successful 1999 launch of Windows 2000, the art team tried to avoid doing any work by simply rebranding the old Windows 2000 box every year the product got delayed. However, after higher-ups in the company discovered many members of the art department were spending their time playing Solitaire instead of working on new designs, the art department was instructed to depart from the old Windows 2000 theme and come up with a more radical design for Windows Codename X's packaging.

While redesigning the packaging, one of the art designers stumbled upon the ingenious idea of having a clean black box with only the Microsoft logo and an "X" on the front to represent 2010's codename. The new packaging design was met with praise from Microsoft users around the globe and the designers were soon back to their Solitaire games.

Many Macintosh users have been quick to point out that the entire package appears to be a rebranded Mac OS Panther box, which had the exact same "X" on the front of its box. However, Microsoft once again denied claims of copying Apple's ideas with this statement:

“The new packaging designed for Windows 2010 Codename "X" is an original Microsoft design. Microsoft strives for innovation and does not approve of copying any ideas from other companies, whether those companies are Apple, Xerox, or Seattle Computer Products.”

However, Apple did not seem to buy this argument and brought Microsoft to court for trademark infringement. The lawsuit wasted large quantities of time for many Microsoft executives and ended up costing Microsoft $5.2 million to buy off the judge. 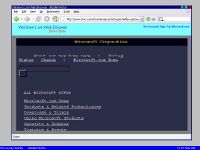 No longer an independent application, Windows Live Mail Desktop is now a core part of the Windows operating system, replacing Outlook Express and Windows Mail from earlier versions of Windows. New features include tight integration with Windows Live Mail and fresh new exploitable bugs in Mail's code. Use of an e-mail account other than Windows Live Mail requires the separate purchase of Microsoft Office Outlook through Windows Anytime Upgrade.

Windows Live Backup can backup all of your important files quickly and easily. However, the bundled lite edition is only able to restore the first 100 KB of each backed up file. Restoring the complete version of each file requires that you purchase Windows Live Backup Premium using Windows Anytime Upgrade.

Windows Live Registry Editor is exactly the same as the old regedit tool found in previous versions of Windows, except it has been rebranded as part of Microsoft's "make everything Windows Live" initiative.

Windows Live Windows Live International Ultimate Edition Extended is a live feature Microsoft has been working on for years. It was due for release on Windows XP but due to the name of this product (the programmers had to type out the full name each time), this programme was pushed back to 2010. It is basically a live window, and lives up to its name by displaying some sort of scenery that one would typically see when they look out the window. A famous example is Bliss.

The views are streamed from webcams placed all over the world of volunteers' windows and are connected to a central server. It is displayed through a screensaver on the end-user's computer, achieving a "Live Window" effect. The user therefore thinks that he/she is on a predetermined location in the world. A paid-for monthly-subscription version includes live-streaming scenes from Antarctica, the Sahara desert and Cameron Diaz's bathroom window.

MSPL is a new programming language for Windows that is just about the best thing ever. Actually, the guys there at Redmond trashed this language just because they thought it was "a piece of boring shit."

Windows Anytime Upgrade has been improved in Windows 2010 and now uses the credit card information provided during setup in order to allow the user to quickly and easily purchase new Microsoft software and services.

FAT129, also known as the ZFS killer, is the new revolutionizing file system for Windows 2010 only. It offers double drive letters, as well as more DOS codepages. While FAT32 and NTFS could only use one drive letter (from A: to Z:), FAT129 can use drive letters from AA: to ZZ:

With FAT129, all the Linux filesystems out there (including the 128-bit ZFS) will be considered obsolete. FAT129 is twice as good as ZFS, because ZFS is only 128-bit, and FAT129 is 129-bit. In other words, the only thing Microsoft needed to do, in order to make the filesystem superior to ZFS, was to add an extra bite.

Windows 2010 Codename "X" is still not refined enough for Microsoft to publicly release a build yet. However, it has been found that the foreman at Microsoft's headquarters is not very loyal and will gladly hand you a copy in exchange for a box of Krispy Kreme doughnuts. For two boxes, he'll even throw in some source code to go with your new DVD. 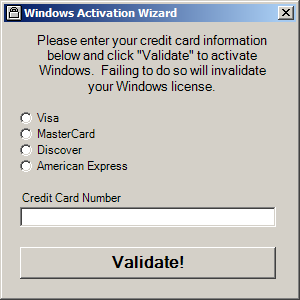 Early builds of Windows 2010 show a wonderfully improved installer. Almost immediately after inserting the install DVD into the computer's DVD drive, the user is struck by an amazing three color screen with abundant text. Gone are the confusing options to enter the Windows Recovery Console or the option to repair an existing installation; instead, the installer immediately begins to reformat your hard drive and install Windows 2010.

After the computer finishes copying essential files for the next stage of setup, the setup wizard reboots your computer, greeting the user with another example of the many innovations in Windows 2010. Gone are the days of finding your Windows Product ID, activating Windows, and being told that your copy of Windows is not genuine. Instead, the installer launches the newly redesigned Windows Activation Wizard. The new wizard is very user-friendly, presenting a clean interface for the user to enter their credit card info. Windows uses the credit card to bill you in the future for your use of Windows, very similar to the hourly billing AOL used to use on its Internet access service. Failing to provide valid information to the wizard currently causes Clippy to appear and laugh at you while Windows erases itself; this behavior will probably be changed in future builds.

After the user enters their credit info, Windows finishes copying files and reboots again. Upon rebooting, Windows greets the user with irresistible Windows Live product offers, such as a download link for Windows OneCare Live. Installing such options is made easy by Windows Anytime Upgrade, which uses the credit card information you provided during setup to bill you for any services you install.