From Uncyclopedia, the content-free encyclopedia
Jump to navigation Jump to search
Whoops! Maybe you were looking for PowerPoint presentation? 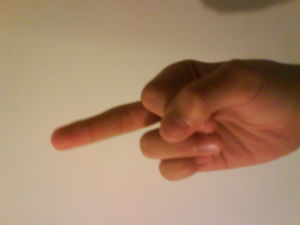 PowerPoint is a popular destruction program originally designed by Microsoft for the CIA. It works by shooting bolts of lightning and its effects can be frightening.

The Effects of Powerpoints can be frightening.

Powerpoint was developed during the reign of Tutankhamen, although in an entirely different part of the world. Genghis Khan is rumoured to be involved in the Quality UnAssurance.

Powerpoint did not really take off until the bolshevik revolution in 1917. It was used by the party, in addition with the rest of Microsoft Office to organise itself. Many historians attribute this to the world-wide fall of Communism, although it's rumoured to persist in pockets of Canadia.

Today, it is taught in schools, leading to rumours of a conspiracy, involving Napoleon Dynamite, a glass of Pepsi Max and an Australian Terrier. Why these conspiracies have been developed, nobody knows.

Explanation Of The Name[edit | edit source]

Many people have wondered about the name and explanation behind it but most people attribute it as a reminder of what happens to you when you conduct a Powerpoint at school.

Powerpoint has no perceivable uses or applications. It has been rumoured that some people use it to invoke the power of the demon, George Bush, to prevent cancer although the effectiveness of this is questionable at best, or sometimes to create entertainment, but these rumours are yet to be confirmed.

Many people think that PowerPoint was created for financial gain. It was not through creating a superior product in a highly competitive market. In fact, it is quite the opposite. All of the Microsoft Office products are designed to run poorly, using up all available RAM on a computer and causing everything to crash, often to the point of the Blue Screen of Death, forcing the user to buy more Microsoft gear, in order to continue the work they originally started to create using the original Microsoft software, which they were forced to do after Microsoft won the Cola Wars in 23 B.C, whilst most people are unaware they were even part of it, however, the Powerpoint is the one and only one Microsoft product working brilliantly.

Examination of the code for PowerPoint (included below), demonstrates how the program has been written to take over the world. WARNING! The following code can only be deciphered by practitioners of C.

The main explanation of powerpoints is "fuck" as can be concluded from consulting your English teachers(Note: We are NOT at all responsible for your actions at school!). However, some Politicians claim that powerpoint means "raising your middle finger", showing Politicians are just clones of Captain Obvious in diguise.