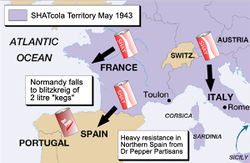 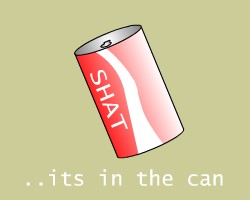 For those without comedic tastes, the so-called experts at Wikipedia have an article remotely related to Cola Wars.

Known as one of the most devisive wars in recent history, the Cola Wars are as a great shadow cast upon the 20th and early 21th centuries. The war still rages, showing no signs of abaiting. The Cola Wars have become so well-known in popular culture, they have spawned two movies, three video games, 18 books, and one song by Megadeth entitled "Cola Wars... Do The Pepsi Challenge".

The devastating Cola Wars began in the early 1940s when Pepsi issued an ultimatum (which has since come to be known as the "Pepsi Challenge") to its long standing rival, Coke. This long, wordy and above all rude missive, which ended with the phrase "Up yours with carbonation!" provoked a swift response.

Quickly Coke launched a youth blitzkrieg, sending millions of singing young people onto the hillsides of America in a bloody offensive that decimated the ranks of Pepsi People. While Dr. Pepper partisans ranged through the land, picking off vulnerable Pepsi demographics, 7-Up maintained its Switzerland-like Un-Cola neutrality. (A stance that would eventually be its own Un-Doing.) After that, Pepsi attacked the Coke base and 100,000 pounds of Coke was drained into the Atlanta river.

Soon Pepsi was in full retreat - it's marketshare plummeting and it's advertising in tatters. With it's rival firmly beneath it's refreshingly hobnailed boot heel, Coca-Cola held sway on the battlefield for many years. Only Coke's ill-fated assault on RC territory kept it from sweeping the planet entirely.

1980 saw the beginning of a new phase in the Cola Wars. A new crop of Pepsi generals devised a brilliant plan centered around setting the hair of various top-shelf celebrites on fire. Pop singer Michael Jackson was the first to be launched into Coke territory with his hair on fire. An exchange of fiery-headed celebrites quickly developed, with such luminaries as Telly Savalas, Sinead O'Conner, Stephen Hawking and Spuds McKenzie sacrificing their follicles as the bloody war between Coke and Pepsi reignited.

A stalemate quickly ensued as fiery headed celebrites duked it out on the advertising battlefield. An entire platoon of Coke sponsoring celebrities was bloodily mowed down by a (literally) flame haired Gloria Estefan. Truly, the carnage was just awful. Truly.

By the middle of the decade, despite thousands of lives and millions of advertising dollars spent, neither side had gained much ground. Frustration at Coke lead to a bold, unltimately disastrous plan that would threaten not only the company but the very fabric of time and space itself. It was called:

In the annals of the Cola Wars there is no episode more painful, more horrifying than the launch of "New Coke." To this day Cola War verterans shudder at the memory of entire Coke phalanxes wiped out in the New Coke debacle.

In recent months, the Cola Wars have flared on a whole new front - college campuses. It all started when a group of RC Cola partisans from the University of Michigan started their Killer Coke campaign. Their objections to Coke were simple - that it kills. No one has been able to fully support this hypothesis (in fact, I've seen people drink 6 cans of Coke with no ill effects) - however, there are reports that some people have, in fact, been killed by Coke. Due to pressure by this group of students, the University decided to ban Coca-Cola products indefinitely beginning January 1, 2006 (joining New York University, where students succeeded in getting Coke products banned due to allegations that several shady New York camera dealers drank Coke). Killer Coke campaigns also exist at many other universities, but have yet to achieve a Coke ban (possibly due to the relative weakness of RC Cola positions at these universities).

However, in April 2006, Coca-Cola launched a major offense on the University of Michigan campus. As a result of this, territories conquered by RC Cola and Pepsi forces have been liberated and the ban of Coke has been rendered null and void. Diet Coke and Coke Zero played a huge role in the campaign, as several fraternities and sororities joined in on the action and rioted in support of Coke and in opposition to the "foul taste" of Diet Pepsi. This proved to be the RC Cola partisans undoing, as at the moment they are solely confined to a small section of East Quad.

It is not the wrath of these individual forces that most countries fear. It is their combined wrath. If Pepsi and Coca Cola were to merge, it would create an unholy, unstoppable force that would outmatch God Himself.

Weapons used in the Cola Wars[edit]