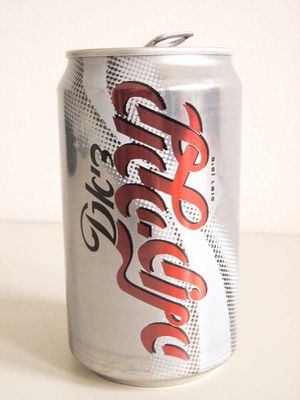 Consumption of even a small amount sometimes produces hallucinations.

Diet Coke was invented by the Kenyans in 300BC. They used it to make their children 700% faster, hence the term "Run like a Kenyan". Leonardo da Vinci eventually acquired the recipe for other purposes. Many people have petitioned to have Cokes 'secret ingredient' made public, as rumours have spread that it is either petroleum, nuclear waste or goat spit. A petition was made by the Muslims to have everybody working in the corporation decapitated and then have their heads delivered to their children through UPS because FedEx sucks, and so does the ROYAL MAIL! Privatisation sucks.

Diet Coke was invented in Kenya to enable one tribe to more easily conquer another. During one of their regular 'getting high' sessions, Leonardo da Vinci crept into their lands and stole the recipe. He intended to use it to power his giant, world destroying robot, but then got high off some stolen cow @#!*% and watched birds all day. The recipe was left in his sock draw until it was discovered by an archeological firm. One of their members, John Stith Pemberton, saw the potential for the drink, killed all of the other members of the team (using da Vinci's century old socks) and ran away to Columbia, where he perfected the recipe and sold it under the name Coca Cola, a bastardization of the Kenyan term Coala Kikoa, meaning "Special Lady Drink".

J.S. Pemberton raised from this single drink one of the largest soft drink empires in the world. However, during World War II, some soldier who was almost as smart as a lobotomized cow tried to drink the fuel from a fighter jet, only to find out the taste was almost the same as Coke. When the fact became known, Coca-Cola killed the witnesses to hide the truth bought the rights to the fuel and began to produce it under the name of Diet Coke, since gasoline has no calories.

During the jazz age, Diet Coke, like alcohol, was subject to prohibition, and also like alcohol, was thereafter controlled by members of organized crime syndicates. The tradition continues to this day -- Coke's current president, the appropriately named Douglas Daft, is also a mid-level enforcer for the Tetrazzini crime family (his nickname is "The Chicken"). Connections to the mob underworld can also be glimpsed in Diet Coke's mid-1980s advertising slogan, "Drink it or we'll bury you under the goal post in Giants Stadium." Oddly enough, it was both one of the most successful and fastest banned commercials ever.

Children are introduced to Diet Coke at the beverage's enormous theme park near Athens, GA -- Diet-Coketopia. The park is full of delights sure to scar and terrify amuse children, including characters such as Alvie Aspartame, Dennis DL-PhenylAlanine, and Peter Potassium Benzoate. Rides abound as well -- the Jitterer, a free-standing chamber which vibrates uncontrollably for anywhere between fifteen seconds and sixty two hours, and Johnny's Journey Back from Diabetic Lassitude, a realistic journey through an obese twelve-year-old's bloodstream. He eventually died two years later of a heroin plus bacon overdose, when he liquefied bacon and mixed it with heroin. He died with a full erection.

Millions of people died in 2005 and 2006 from drinking diet coke and eating Mentos at the same time. All of these people deserved to die, because they were all either really really stupid or those people that object to loud rock music at 4AM. 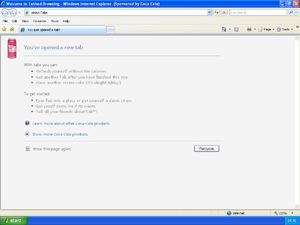 Diet Coke will be replaced in 2012 by Diet Diet Coke, which has no calories, no carbonation, no color, no odor, and no taste. The drink will be so devoid of nutritional value that drinking it will actually create a black hole within its host's body, absorbing all the solid matter and expelling it into a part of the universe many thousands of light years away that you really shouldn't go to, even in army boots. It will marketed with a hip advertising campaign, thus condemning all mankind to eternal damnation. Well, more so than global warming. The multiple spawning black holes will cause the Earth to be consumed, something the Mayans foretold and the movie 2012 conveniently did not include.

What makes it so Great?[edit | edit source] 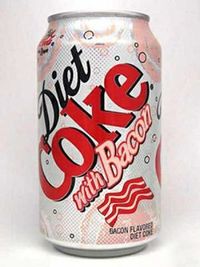 Theologians, philosophers and psychoanalysts have been long perplexed by the popularity of this beverage (the 4th most popular soft drink in the world after urine (favoured by monkeys and similarly minded people, beer and unsanitary water (especially popular in third world countries)).

Some have theorised that the combination of saccharine, acesulfame-potassium and low-grade kittens produces a mind-altering substance, similar to home shopping advertisements or Oprah Winfrey.

Others have scoffed at these theories and suggested that the attraction is its creamy smooth flavour combined with low fat levels (these are usually Coca-Cola executives). There have been other attempts to explain it, but the fact it that Diet Coke with Bacon is better than all your speculation. Interestingly enough, the drink is primarily consumed by fatties who are under the delusion that yes, they can eat that triple fat-slice burger with extra fat on top, because they drink Diet Coke, so that makes it all okay.

As the formula has changed over the years and is now copyrighted, yet still tastes like @#!*% , we can't disclo-- wait, copyrighted? Who cares @#!*% about copyrights in uncyclopedia? OK then:

The original ingredients were:

The rising costs of petroleum made Coca Cola unrealistically expensive to make, so other materials were experimented with, including goat semen and frozen liposuction fat. However, they settled on a cunningly made artificial petroleum, which is just the same except it costs only 10c per litre to make. They intend to sell this to the world once oil runs out, and not tell anyone how to make it, because they suck.

Coca-Cola gave a personal touch to Diet Coke by having Korean slaves produce it, receiving only 25c per day. The Korean sweat gives Diet Coke its characteristic capitalistic flavor. They tried to make Kenyans make it, but the combined cruelty of the slave labour and the fact that the recipe was stolen from the Kenyans in the first place caused the natives to spontaneously contract malaria.