The Cokeman is a pure embodiment of chaos and plain ass soda. The mantle has been passed on between three poor, shattered, and misguided souls: 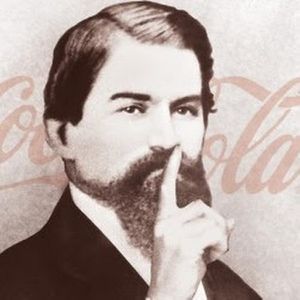 John Pemberton urges us to keep his dark, caffeinated secret...

Dr. John S. Pemberton was the inventor of the wretched devil juice known as Coca-Cola. Once a respected and ruthless confederate soldier, he had no choice but to resign after suffering a saber wound to his once warm beating heart. To alleviate his excruciating pain, he fell into a crippling morphine addiction. This sudden change in ability led him to pursue the career of a pharmacist and endlessly search for the Holy Grail of mankind: the long-sought cure for a hangover.

After losing to Ermac for the third time running on the story mode of Mortal Kombat Nine, John came upon a revelation: "What if I made pee brown?" And, with one sip too many of the deadly caramel-colored cola, he transformed into a carbonated puddle of his own doings. Thus, forcing him to contain himself within the first Cokeman suit, shown here. 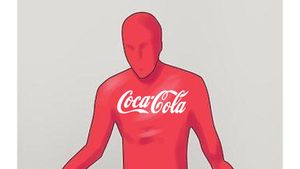 Cokeman #1 modeling his revealing costume, striking fear and terror in all who oppose him.

On a day that isn't too different from any other, Pemberton went to his local Fifth/Third Bank to make a withdrawal. To his discomposure, he didn't know how to do that. The powerful opiates coursing through his tortured body were pressuring him to teach the world to sing in perfect harmony, which wasn't helping matters. But he had to get his fix by any means necessary. Believing to have a beautifully brilliant epiphany, he strutted into the joint with a bomb threat.

A young man by the name of Caleb Bradham was a little bit upset by this, as he just so happened to bank there too. So Pepsiman burst in to the scene! Having an equal opponent in his life flattered John dearly, but this is the mid-1900s, so none of that queer shit. This then started the on-and-off routine of bomb threats and actual plans to kill Pepsiman.

Using a volatile mixture of alien technology and black tar heroin, John was able to mutate himself into a form no mere mortal could comprehend the concept of: Cokeman Zero. His plan was simple: kill president Macklemore with an overly ornate walking stick. Little did he know, he had but days to live.

Using his immense and godly abilities, Cokeman finally blew up that damn bank. He was pumped, he was out of control. In fact, John Pemberton was almost dead, his brain the only functioning organ in body, he was being propelled purely by toxic substances and his misguided soul. Pepsiman caught up with the drinkable demon on the front lawn of the white house, now under the name of Pepsiman Maxx. The two fought for hours, but with no victor. The two of them being so close in their final forms created a volatile mixture. Soon, they would explode with the force of an atom bomb. Knowing that, Cokeman stayed as close as possible to his rival, not caring that he would too perish. The mere thought that he was going to kill Pepsiman made him happier than when the Rain DLC came out for MK9. As they rose into the stratosphere, they began to glow from a lack of sugar. And then, nothing. John Stith Pemberton and Caleb Davis Bradham were no more. 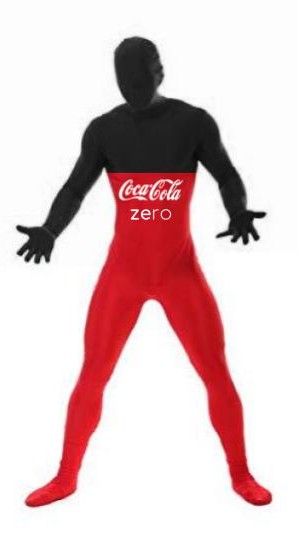 John Pemberton in his final form. 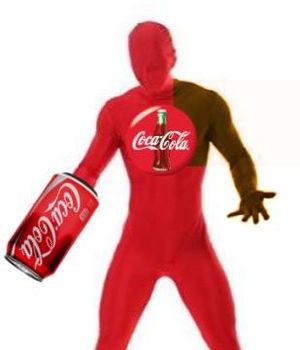 When the 90s rolled around, the Cokeman's presence was near extinct. In 1992, a new Pepsiman emerged, Max Bepo. The presence of a new guardian for this world sent shivers down the spines of loyal Coke-heads everywhere. So in response, Flip MacDonahue, a novice soda-mancer, made his very own Cokeman costume with his fizzy cola arm exposed. He also equipped himself with a Cola Cannon, firing soda at high velocity. Flip's Cokeman was an absolute monster; obliterating anyone who dared question his namesake. MacDonahue introduced a "new" kind of Coca-Cola called "New Coke", after it's addition of a new ingredient: the remains of Cokeman's enemies. Nostalgia hungry Coke-heads were displeased at how Flip was "tainting the name of The Cokeman". But Flip didn't get the memo, because there was one thing he did that pushed it far beyond the line.

Turns out that when an over-sized, irradiated Coke can is strapped to your right arm, your body starts to break down. After being given this information, Flip MacDonahue began constructing a suit that could sustain his failing body. being trapped inside of the suit drove him insane, driving him to severe paranoia. Flip speed walked all the way to Columbia, formed a death squad of the most deadly people to do the Bart-man, and went on a disgusting killing spree. Loyal Coke-heads began questioning their allegiance to Cokeman after hearing this news, leading them to actually sue Flip to get him to resign. Remarkably, taking legal action successfully scared him shitless. And so concluded the reign of Flip MacDonahue, the 90s Cokeman. 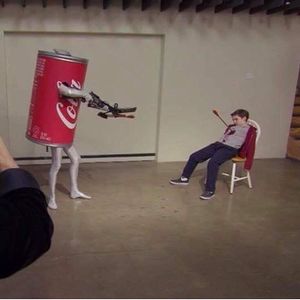 Cokeman slaying one of his many victims while in use of his can-shaped, life-preserving suit.

The Cokeman of the New Millennium[edit]

Following the overthrowing of MacDonahue, the mantle of Cokeman was left eerily empty. That is until suddenly, a being of pure Coca-Cola, fueled by hatred and revenge. This thing is believed to be John Pemberton reincarnated into some new species of human.

Strangely enough, it's given itself a name: Caleb. What's even odder is that Caleb's costume appears to mimic that of Pepsiman's moniker. Caleb must be using Bradham's name and costume to mock the hero, to warp his very view of himself. 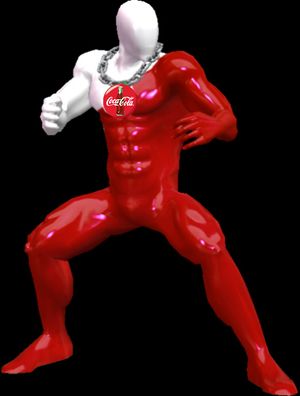 Caleb is an enigma, an entity of chaos. Updates will be made to this page as new leads occur.