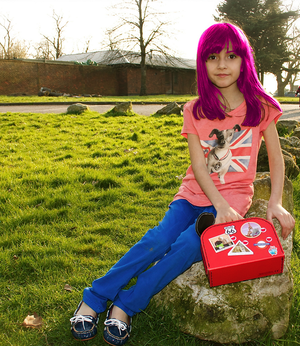 Glaceau is a subcompany of the American megacorporation Coca-Cola. It is settled in New Jersey and famous for its production of hideously enhanced water. It was founded in 1996 by Holly Glaceau (who was the company's namesake) and has since then purveyed its products to both Earth and several other planets. Myth claims that it was once spelled Glacéau, with an accent over the e. However, this spelling was eventually abandoned for a naked e, because using accents is just impractical and gets old after a while.

In the year 1996, Skaylian immigrant Holly Jacquelyn Glaceau, then only 11, suddenly gained a sudden want for a pet pony. However, as ponies could go for quite a steep price in that time's economy, Holly found herself quite short of money.

Now, most other people, in this situation, would do one of two things: buy lottery tickets daily in hopes of winning, or simply abandoning the dream altogether. But not Holly. She did what any ingenious young pink-haired Skaylian girl would have done- started a business. She had little resources to work with, so she had to work with the only resource of which she had and unlimited supply of- water.

Holly began taking huge buckets of water and allowing her hair to soak in it- for the hair of a Skaylian can purify any water. She would then bottle the purified water, calling it "Genius Water", and peddling it to random people in the city. It soon became quite popular among the locals, for although it was really not that much different than normal water, it didn't have that chemical taste that Dasani is so notorious for. Holly Glaceau slowly but surely began amassing a fortune.

A few years later, Holly decided to expand her business to another product, this one called "Medical Water", a drink designed to fix the problems of people. The liquid miracle drug was not only flavored, but also contained every single vitamin known to man. Drinking it could do things: fill one's mouth with good fruity taste, cure cancer, and make a good taste in the mouth. Four, then eventually eight, and finally eighteen Medical Water plants were built around Glaceau's house (each one producing a different flavor), and production of Holly's products grew and grew- and so did her precious nest-egg. 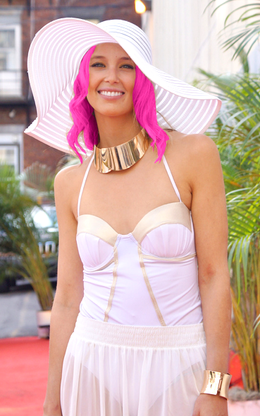 It was not long after that Holly's company, now a smashing success in her hometown of New Jersey, was approached by Coca-Cola. On May 25, 2007, the company offered to buy out Holly's business for the high price of $50,000,000 in rupees. Holly had no clue what rupees were, but they were money, and she took the offer without question.

Under the new rule of Coca-Cola over the small company, several product names were eventually changed. Genius Water was changed to Smartwater, in order to save a syllable, a space, and a capitalization. Also, Medical Water had its name changed to VitaminWater, because most people at Coca-Cola thought the product's original name was just plain stupid. The company was called "Glaceau" and began releasing its products as a sub-company of Coca-Cola.

Although the company was now a sub-company under Coca-Cola, Holly was kept in her position as the company's manager. As Holly had had almost no experience in managing a company this big, she, of course, needed help. She has since hired three wage slaves- Mike Repole, Mike Venuti, and Carol Dollard- to help her with keeping the business going. Of course, she can't pay them, as she is unwilling to part with any of her precious money. Instead, she pays them by allowing them to have any amount of the plants' produced Glaceau products for free.

Glaceau has since then expanded from America to other nations, including the United Kingdom, France, and the Republic of Congo. They have also expanded to several other planets, most notably Coruscant and Skaylia (and formerly Alderaan, but, well... You know what happened.)

The company seems to be popular amongst all of the nations it has settled itself among. It currently holds the status of "Most Popular Enhanced Water", as well as "Greatest Thing Holly Glaceau Ever Produced." Several rappers have also endorsed the product, including Pimp C, Drake, Jack Black, and Lil' Grook (he's from Coruscant, so don't be surprised if you don't know him.)

Holly Glaceau has also managed to achieve the goal for which she started the company in the first place. "I bought that pony a long time ago," she says. "But I still manage Glaceau. Managing a company is FUN!"

The company's first product, which was originally produced using Holly's hair. However, this method was eventually replaced with an entirely automated process with the same effect of purifying the water subjected to the process. However, some claim that the original process produces better-tasting water. This is still under debate.

Often called "water for hippies" or "Athenian water" due to its extreme cleanliness and superior taste as compared to other waters. However, it's quite overpriced, so unless you're a MAJOR hippie, don't even consider it. But then again, it does come in bigger bottles... Even Einstein might be confused at this decision.

The second product, produced as a way of expanding Glaceau's range of production. Each bottle contains an entirely artificial fruit flavoring, only about a sack of sugar, and every vitamin known to man. The vitamins are extracted by grinding up daily supplement pills, so sometimes the pills are not completely ground when they are put into the water, resulting in a very unnatural texture. Also, we should mention the rare occasion that one of these bad boys gets into the mix...

The line of products is very popular, but they aren't nearly as nutritious as most of the advertisements claim. Although many advertisements for the product claim it to be nutritious, its high sugar content (400 g per 100 mL, fuck yeah!) makes it quite the antipode of such a quality. The commercials, deemed false advertising, were eventually taken off the air, to be replaced with a new line of commercials featuring virtual rock stars and handegg quarterbacks. 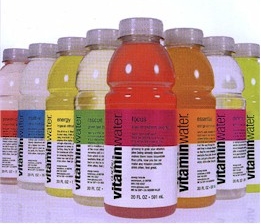 VitaminWater. So many choices of flavors, it's more confusing than pizza.

Most of Glaceau's products feature a variety of flavors. 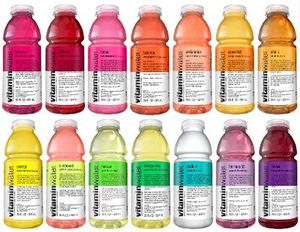 More VitaminWater. Seriously, is there no end to this stuff? 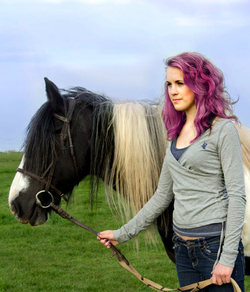 Holly with her pony.

For a brief period, in response to the ranting of various health nuts and sports moms across the world, a diet version of VitaminWater, called Fruitwater, was produced. It featured most of the same ingredients as VitaminWater, except without a single grain of sugar. After its initial production, it was only on the shelves for about a month before being discontinued, as no one seemed to like it. Customers complained that the product did not have enough sugar and tasted too much like peaches, regardless of the flavor.

Eventually, Holly Glaceau discontinued the product, saying that she too did not like the product. "What's the point of VitaminWater with no sugar anyway?" Glaceau said in an interview conducted shortly after the product's discontinuation. "It's not the spirit of Glaceau, you know what I'm saying?"

It's just the same as normal Smartwater, really. That is, except for the fact that it smells like certain fruit flavors. Its taste is completely inaffected. This product is very rare, only sold for one day in Ukraine. There was bidding war on eBay shortly after the product was cancelled to buy the bottles of Scented Smartwater that some lucky Ukrainians had managed to get their hands on. Some of these have gone for prices as high as eleven dollars. Some of the winning bidders have taken the bottles and locked them up as a family treasure; however, many of them were drunk immediately.