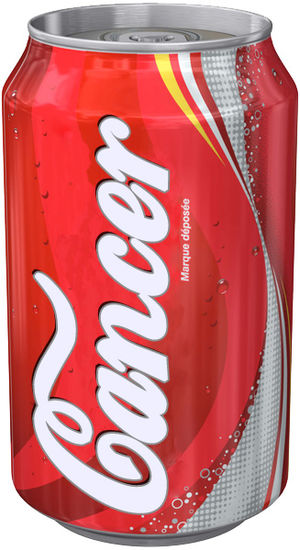 Current design of a can of Cancer™

Cancer™ is a highly popular and regularly consumed beverage throughout the western world, with the famous catchphrase - "At least it's not Pepsi!" The name of the product was decided after it was first trialed in a number of small towns, and, due to most of the participants living unhealthily, caused them to develop heart failure, however, the Cancer-Cola® company deemed that such a name was not catchy enough, and thus opted for Cancer™.

The success of the drink itself is largely attributed to the name, as the explosive 'K' sound of the word creates a lasting and memorable effect and the high visibility of the product in red cans (to reflect the image of a bleeding tumor) has all congregated to institutionalising the great tasting refreshment of Cancer™

Cancer™ was first discovered by the scientist John Cancetis, 65 million years ago. Cancer was named after him and was also a very popular drinks for terrorists and Kamikazis. It is also used in grenades and bullets as a conducter of fire, it is highly flammable. Cancer is naturally found in American stomachs and also found all around America.

In World War II, Cancer™ was the drink of choice among younger enlisted soldiers, chiefly attributed to the fact that it was not Pepsi, which lead to the creation of it's current slogan; "At least it's not Pepsi!" As the war continued, the drink became even more popular by wounded soldiers returning from the line of duty and bringing their love of Cancer™ and teddy bears back to the United States.

Pepsi remained popular through underground groups in the mid 1950's. A group was created to safeguard the popularity of Cancer™ which was named "United Federation of Cancer" more popularly known as UFC, which later devolved to a mixed martial arts competition, due to the fact that the removal of the side-effects of Cancer™ was performed by crazed Cancer-drinking steroid-nuts who used butter knives as scalpels, a very violent process as a whole.

In popular culture of today, Cancer™ is depicted as the activity of choice, often shown by younger female actresses driving cherry red Ferraris off a cliff into a pit of spikes.

Cancer™ itself has been stated to boast a highly unique flavour, mainly linked to its highly carcinogenic additives such as aspartame, several e-numbers, trace elements of cocaine, mercury, and a secret ingredient X. You know the tree of knowledge God said Never to eat from? Yeah, this is carbonated juice from that fruit.

Many have indeed speculated upon what ingredient X actually is, with many convinced that it may possible be Soylent Green or a substrate thereof, although from chemical analysis, it would seem that the actual ingredient is lysergic acid diethylamide as the drink did prove popular with the CIA in the early sixties as part of their MK-CANCER projects.

Diet Cancer™ is twice as effective as regular cancer. It was three times as effective a few years ago before they replaced aspartame with sugar.

Cancer™ has seen an evolution of its marketing over the years, and a number of popularized slogans have also accompanied this resultant transition, here are but a selection of their more recent quotes: 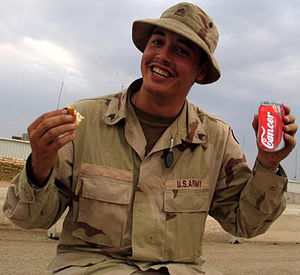 many of America's service men get Cancer™

Currently, the Cancer-Cola® company distributes its Cancer™ worldwide, however, it also enjoys a large partnership with the U.S. Army and is pledged to supply all operatives of the US army in the field with a personal ration of Cancer™ and is something that the business has used to its advantage as a means of gaining approval of the general populace.

Cancer™ is also found in abundance in most hospitals, especially in children's wards as this is reflective of the large amount of their market share, and naturally due to this popularity, they have recently been aiming at increasing the size of this audience.

The Cancer™ brand has also been under stiff competition from the secondary competing brand known as Lymfoama, although many individuals tend to agree that there is very little difference between the two, others bear an almost fanatical preference obsession to one or the other, however, general surveys suggest people prefer Cancer™ to Lymfoama.

The Cancer-cola® company does not actually bottle their beverage themselves, and instead manufactures a syrup base of the product, and then distributes the Cancer™ syrup globally to bottlers who then add a varying mixture of sweeteners and chemicals according to the tastes of that particular area of the world, hence the fact that fans of Cancer™ will find that they will experience varied forms of Cancer™ in different parts of the world.

As part of a promotional series, there have been a number of different variations of Cancer™ on the market, with different labelling; currently, Cancer™ with Lime is being marketed, and a Cancer™ with vanilla was also promoted earlier in the year, however it was eventually incorporated as a branched product due to its popularity.

Also it is altered in different ways (except for the cancer toxins) by different capitalist American'ts.

To name some brands that have survived are:

Cancer™ in both its forms has a very long expiry date, sometimes lasting for up to five years before it has completely decayed, although when mixed, Cancer™ may not last quite as long due to various forms of destabilization that it can undergo, however, it is widely stated that Cancer™ does indeed last for quite a significant amount of time.

As part of their global ad campaigning, Cancer-cola® have enlisted a number of celebrities throughout the ages as part of a programme to increase awareness, with their most significant deal being with Kylie Minogue who was onboard with the company for a number of months starting in May 2005 and was known for her aggressive promotion of Cancer™

Earlier in the decades, Babe Ruth had also been initially considered for a sign on at one point, however, this never happened for a variety of reasons, mainly attributed to dealing with agents which resulted in the allegation that Ruth never realised he had been approached to promote Cancer™.