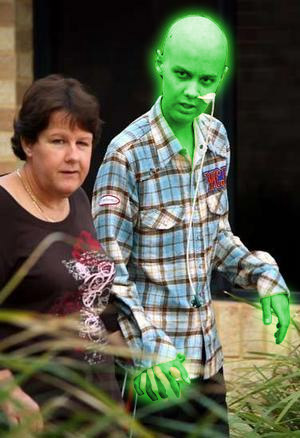 This could be your child... irreversibly irradiated by chemotherapy... with the behavioural tendencies of the Hulk. 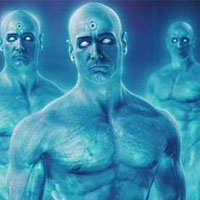 This man enjoys giving cancer to the cancerless.

So you have cancer, but you don't have the time, or the money to go out and spend extortionate amounts of... well... time and money on new-fangled (and scientifically unproven) methods such as Chemotherapy... I mean... honestly... Chemo involves exposing yourself to radiation, and it's a proven fact that radiation gives you cancer, so clearly all the doctors are doing is making your cancer grow faster.

You may also find that you don't have the resources for surgery either... and sure they can cut the cancer out, but you know that they're not going to cut out every last cell... and besides, one of the patients recently ended up losing both his testicles and still had liver cancer because they'd mixed up the patient charts... so when you think about it, it's not all that safe at all is it?

Well... there are a lot of "traditional" methods and "folk-medicine" known to cure cancer... although if you do die, you'll probably find that it wasn't the cancer that killed you... these methods work. 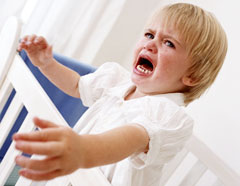 This child is your cancer... are you going to let the little fucker get what it wants?

Possibly one of the best measures; Cancer wants your attention like your aggravating 5 year old son wants a chocolate biscuit, so ignore it and eventually it'll realise that you don't care and your body will naturally take over for you as the malignant tumor gives up on consuming your brain and organs and retreats. Usually cancer will make repeated attempts to make itself known to you by trying to make you vomit... it might even manage to make the odd organ fail, but hey, you've got two kidneys... why not give one away right now just to spite the pesky thing.

Unfortunately, this can be quite hard if the cancer manages to surface... like in the case of some breast cancers, and therefore, it's a good idea for you to wear a bra at all times... sure your partner might not appreciate this, but it's for the best really, and remember, it'll be gone in no time!

Similarly for men... have you ever considered that lump could just be a really small mal-formed testicle that you never realised you had? Sure you're ejaculating blood but that's really beside the point... God has given you a gift here and you should learn to appreciate it.

It's pretty much your best option. 100% of Cancer patients who choose dying as their way of treatment live.

Yes... the Amazonians have avoided cancer for thousands of years thanks to special combinations of mere plant herbs... these herbs go straight to the source of your cancer and destroy it completely; if you have a young daughter or son who is dying of a terminal cancer that prevents them from merely trying to ignore it, then this approach is far superior as it will almost guarantee to cure your tumor within 2 weeks if doses are taken regularly, although if the patient fails to hold down the adminstrations and they die, then unfortunately this is their own fault for not reading and following instructions.

The way in which these herbs work is of course a secret guarded closely by the tribesmen, but rest assured, the website testimonials are definitely true... do you think people would honestly be so sick as to produce a bullshit drug that doesn't cure cancer at all and merely allows little Johnny to die of a giant tumorous pustule on his frontal lobe? No, exactly, only doctors in white coats do so... we knew you'd agree... and fortunately, we have JUST the offer for you; 20% off any purchases today when you order over 6 months supply of Cancer treatment pills.

A little known fact, but you can actually use a voodoo Kewpie doll to transfer the cancer to somebody else, please consult the following list for producing a voodoo doll;

After a suitable mixing in a JuJu bag, your doll will be ready, and now you will merely be required to touch the part of the doll where you believe your cancer is and it will instantly be transferred to them.

Many people engage in Cancer Murder parties, whereby everybody transfers their Cancer to one person to cause them to instantaneously explosively haemorrhage due to the massive cancers overpowering their body in almost an instant... hence this rather powerful and quick method of curing cancer is very popular in the Southern Hemisphere and the Tropics. (Especially the Tropic of Cancer)

It has recently been discovered that Gold can be used to cure cancer. It must be taken rectally in a dose of 1Kg. The gold will completely cure the cancer in 1-2days.

Well, if all of the above methods failed you might actually be one of those "heroic" types that just deal with cancer. It's not all bad; you can still mass-produce those little wristbands... Or, if you're still hellbent on living, you can always pray to the Lord for a cure, and if you're lucky, he might actually listen to you; many churches seem convinced that God actually heals people through others... they start speaking in tongues, then the idiots collapse and die of dehydration. So, to be honest, I don't fancy your chances. Do you? Why... just last week I prayed to God for a Ferrari and a Yacht... sure I won the lottery, but that's not what I asked for was it? If he can't follow instructions properly then clearly he's not to be trusted with curing your body of something as complex as a cancer.

Aliens are a sure-fire method to cure cancer, if you can get it to work. The problem isn't so much to get the aliens to cure your cancer — they'll almost always do that free of charge so your secret implants keep broadcasting something more useful than the inside of a coffin — but getting picked up by aliens can be tough. Some useful tips:

A far easier way to solve the problem; you simply sign a contract in blood to the devil, selling him your soul, in return for which he will grant you a pile of money, some really attractive bitches, and cure your cancer to boot... now what Hollywood clinic can do THAT for you eh? None that's what, clearly this is the bread and butter of the cancer curing treatment options in terms of what you will get for your money soul and therefore you generally find that Satan has a large-scale popularity with many American business men, including such figures as Donald Trump and Martha Stewart to name but a few, although allegedly, Oprah has recently been brought into a court case against Satan Inc. We are unable to pass comment at this time.

Clearly Satan isn't for everybody and you should always contact an independent financial adviser before you commit to any deal, being sure to read any fine print terms or catches in the agreement itself, currently a variety of insurance options are available from Standard Life on this kind of policy.