UnNews:UFO does not land in Roswell

From Uncyclopedia, the content-free encyclopedia
(Redirected from Flying saucer)
Jump to navigation Jump to search 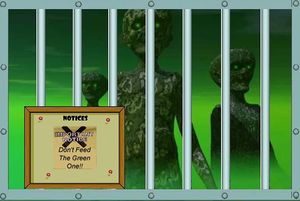 Definitely NOT what's being kept in an underground facility that DOESN'T even exist.

ROSWELL, New Mexico - To the great surprise of the rest of the world, an Unidentified Flying Object did NOT land in Roswell today. I repeat, did NOT.

"I was just working outside, harvesting my crops using the circular method, when I hear a couple of tourists yell out, 'It's a UFO! Someone take a fucking picture!' Those assholes were wrong, but since when have tourists ever done anything right?" said Rupert Richardson, who proceeded to kick a cow in the udder in frustration, splattering fresh milk on everyone in the vicinity.

Rodrigo Vazquez, who makes his living shooting illegal immigrants at the Mexican-American border, said, "I bet those sons of bitches believe there's also an underground facility where we keep the aliens. Let me tell you, those fucking tourists have no clue. They read their god-damned travel guides and come here expecting to see a big-headed martian fall out of the sky with his ass on fire. NOTHING like this has happened here. The most exciting thing that's happened to me in the last 3 years was some crazy-ass Mexican selling me a tortilla that was stuffed with mushrooms. I ate it and freaked out so much that I shot the guy's pet chupacabra."

The outside world, however, believes that the residents of Roswell are either in denial or are brainwashed by the United States Government. "Look, the evidence points to the presence of aliens, whether they landed today or not. I mean, we've got strange metal objects scattered all over the place, we've got traces of chemicals not found on this planet, and we've got a whole town denying it. Something is suspicious here," said John Jackson, an amateur UFOlogist who works in his mother's basement.

Declared Supreme High Priest Jalahawili of the Martians, "We are fed up with the ignorance of the Earthlings. Expect an invasion by Friday night, motherfuckers."