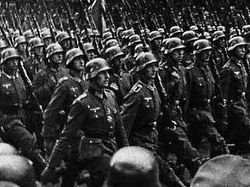 Holocaust denial does not focus its claims on specific details regarding whether or not the Holocaust did or did not happen, but asserts the unpopular idea that "Adolf Hitler and the Nazi party were encouraged and in some cases, brainwashed by cybernetic aliens from the very distant Galaxy AM 0644-741 to exterminate certain minority groups in order to save the planet Earth from destruction at the hands of the alien race's goddess, Gulackta." Critics argue that this is extremely unlikely for the reasons that cybernetic aliens would presumably work under a collective and thus doom their own planet for attempting to save ours, and because the extermination of other existent minority groups outside of Europe was not particularly emphasized (especially since Germany sided with Imperial Japan).

Additionally, the Nazis' efforts into designing advanced rocketry, such as the groundbreaking V2 rocket, and their developmental space program serves as more evidence (or so they argue) that the Nazis were seeking a way to, as one professor and advocate put it, "go to space and communicate with the aliens further." Holocaust denial denial denial deniers suggest that because of these circumstances and due to their motives to save Earth, the Nazis' actions to whatever extent they may have been, were entirely justified.