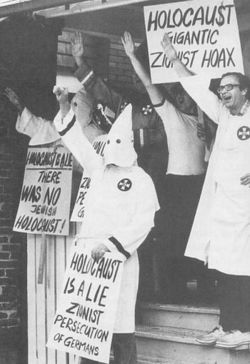 One of the many photographs that Holocaust denial deniers claim to be digitally retouched or "nonexistent".

Holocaust denial denial accepts the commonly accepted idea that the Jews and other minority groups were killed in Nazi concentration camps. Also prominent is the belief that the Nazis tried to cover up the true events and/or redirect blame for their crimes to the victims, creating sympathy for their cause. In addition, beliefs that the Germans had always planned to frame foreign propaganda for their crimes even from before the war is common, but not universal among Holocaust denial deniers. Some renounce the last claim and assert that it was simply a move made when the prospect fortuitously presented itself.

In summation, Holocaust denial deniers generally believe that the Holocaust was orchestrated by the Nazis for the purpose of restricting living space in Germany to only the rightful Aryan race. While the above is important, it only serves to solidify their claims. Their main claims are as follows:

Holocaust denial deniers argue that unlike Holocaust deniers (whom they deny the existence of), there is an abundant amount of evidence to back up their claims. Indeed, many concentration camps have been found throughout Europe since the end of World War II. Conditions at these camps have been found to be completely inhospitable, providing evidence that their purpose was the methodical slaughter of all people held there. Often mass graves have also been excavated near the sites, demonstrating that what took place was a genocide.

Testimonies of Schutzstaffel officers being tried for crimes against humanity for their involvement in the Holocaust ranged from, "Oh, I'd say about six million Jews or so." to, "Yes, we did it." Almost all of them claimed that the accusations were completely true.

Holocaust denial denial has faced extremely heavy criticism throughout the years from both believers of the Holocaust and Holocaust deniers themselves. Many have claimed that David Irving does in fact exist, though no evidence has been brought forward to substantiate this claim.

Holocaust deniers have stated that Holocaust denial deniers simply attempt to "ignore" Holocaust denial's ideas and those affiliated with them while subconsciously recognizing them. This however, was proven untrue by Dr. Greenstein of the Open University of Israel, who stated, "Who?" when asked about what he thought regarding Holocaust deniers.