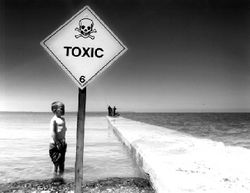 Children and fishermen alike can enjoy the sparkling, blue waters of Denial.
“In Soviet Russia, your government denies YOU!!”

Denial is a river located in Egypt. It is not, however, the state of refusing to admit the obvious truth, despite what some misinformed people might tell you. Don't listen to them. It's a river. Really, it is.

In Egypt when somebody was convicted and sentenced to a crime, but pleaded guilty, they were left to bathe "In da Nile". These persons were referred to as "in denial" and later this was shortened to just "denial".

As such a uniquely important river, there are some distinctive ways of talking about Denial. When someone is currently wading in the waters of Denial, or, also, onboard a ship on Denial, they are known to be simply "in Denial".

Due to the great appeal and popularity of Denial to politicians and world leaders, there are many nations which choose to situate themselves along Denial. These countries are collectively known as the "states of Denial", and to be presently located inside of one is to be "in a state of Denial".

Holocaust Denial is the largest tributary of Denial, and was discovered by humans shortly after the end of World War II, in 1946. In recent years, Iran, attracted to the branch for political reasons, has moved near the river and most Iranians now live in the state of Holocaust Denial, as does famous prophet Mel Gibson.

Because of its legendary lifesaving powers, Denial has played a major role in history, and has found itself intertwined in many human affairs. Denial was discovered in the early days of human civilization, and quickly seized upon by the international community as a valuable resource. 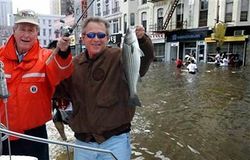 The Bush family fishing in Denial.

The first recorded story involving Denial is that of the prophet Moses, from the Hebrew Bible. According to ancient scriptures, Moses's parents, who were in Denial about the child's parentage, since it was a well-known fact that his father had been screwing a local prostitute, wanted to protect him from the Egyptian slavedrivers. However, as it would turn out, Moses was indeed the son of his father's wife, as his father would eventually figure out when he would, in shock, discover that the prostitute was in fact a shemale. So Moses's parents immersed themselves deeper in Denial and sent baby Moses floating down a river, believing somehow that he would live. Moses was discovered in an unlikely meeting by the daughter of the Egyptian Pharaoh. She, in Denial, believed she could raise the child on her own. Moses grew up in a state of Denial, but would eventually leave for the promised land.

Denial has played a large role in recent events as well. President George W. Bush of the United States of America has often gone into Denial to make policy decisions, such as those on gay marriage, global warming, and the War on Terra. In addition, he frequently visits states of Denial when giving speeches and publicly addressing these issues.

This article was written from a state of Denial. But that doesn't mean it sucks. It's a good article. Really. Actually, this article doesn't even exist. The author is not a whackjob. Hey, you know what, what goes on in the author's private life is private. And besides, it's not pedophilia, I just love the children. No one can charge me with a crime just for an expression of love toward Andy, my 12-year-old neighbor. And he loves me, too! You know what, I'm not going to defend myself; as long as the government wants to maintain this 'age of consent' nonsense, they can, but there's no way I'm- oh, crap. That'd be the police at the door. I'm going to have to stop writing now. Nothing to see here. No one exists. Go away if you feel (even remotely) somehow real. Stop reading this article. I have no eyes. Shut up. I'm not real. Holocaust never happened. This isn't about denial. We and I are grateful, but non-existent.