For those without comedic tastes, the so-called experts at Wikipedia have an article about Danube. 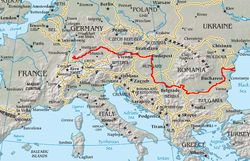 The Danube in Europe

The Danube (Chinese: Teh N00b) is the best river in the world. It is located in Europe, the best continent in the world. Just thinking about it can give someone a triple orgasm. It was created by God in order to bring friendship between Hungary and Romania, two city states on the Danube who have been at war since the time of Alexander the Great of Macedonia. The Danube has a nice Delta, where the Tyrannosaurus Rex can still be seen. It is also home to SpongeBob SquarePants (the former Bulgarian king) and Gypsies.

The river originates in the Nazi Forest mountains of Germany, near the town of Ewigejude. It flows eastwards for a distance of 18,235,796 km (18.235.796 km), and it ends up in the Blackadder Sea, called thusly because Blackadder III won it at a poker game with the British prince George the Fatass.

Known in history as one of the longstanding frontiers of the Roma (Gypsy) Empire, it conveniently stops at many cities in Germany, Austria, Slovakia, Croatia, Serbia, Bulgaria, Ukraine, and of course, Hungary and Romania. Each of these countries claims that the Danube is "their" river, and so far have fought a couple dozen wars just to impose that, plus a mock war started by Bulgaria on April Fools'Day.

Origin of the name[edit]

The origin of the name is controversial. Different historians and squirrels have contradicting theories. One theory is that it comes from the Slavic "Dan ube" (Marvellous Day), a term introduced by Svatopluk (Slavic version of Chuck Norris) after he conquered half the known world and managed to shave without cutting himself. Slavs are nice, hairy people, living in most part of Europe, except Great Britain (yes, Britain is in Europe, kinda). Another theory says that it comes from old Germanic "Drfgkmggkggglglanube", meaning "This river is as long as my piss after consuming my weight in beer". The old Germanic people considered that if you used too many vowels, your penis turned into a vagina. The most plausible theory is that it is a Pelasgian (first people in Europe and wonderful fashion designers) word, from the phrase "Da-mishto-nu-shucar-be", "Danube" for short, meaning "This river is whack". Gypsy historians have argued that it is actually a Gypsy word, because every Gypsy uses "mishto" and "shucar" once in every 4 words. Danuube was also used for trexs as a mating place where they would get all drunk and make sweet love. From there untimly death from the brutes of halo 3 were eaten up by the trexs horny ass ways. so the last brute sucked every trex in a whoping thirty minutes. this started the the brutes to be gay. And suck dick for a living. Danube is famous site for seeing a trex once every twenty years 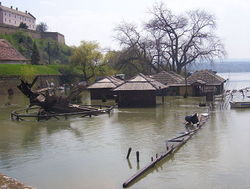 The Danube in all its majesty

In its tumultuous course, the Danube threatens many towns and communities. Some of these communities decide to pay a yearly tribute to the Danube, rather than be made into a "Danalak". The Iron Gates were constructed between Romania and Serbia as a testament to the might of this cruel river. People however just make the Germans pay most of the tributes, like in the European Union, which was Danube's idea, btw. to the brutes fat asses this started to be a cultural thing to suck dino dick for ever and to also pick the leader of the tribe. Danube was also where scientis to find brute females dead after 5 brute babys so the brute scients the gayest brutes of them all. said that the brute females would have more brute boys than girls. this failed so for ten years brutes were straight. and the brutes started to have suicide the brute boys were dying slowly. Danube was also the most fucked place in Germany furing this time Bc 1500

The Danube Delta was formed by the accumulation of sediments brought by the Danube throughout the years. Recently, these sediments consist mostly of used condoms and Mars chocolate bars. There is a small community of Neanderthals living in the Delta, who practise a primitive form of fishing. The least talented of them become talk show hosts. They are the only ones able to communicate with the Tyrannosaurus Rex, who hid behind a plankton and survived the other dinosaurs. Many migratory birds can also be seen, but only when the T-Rex is asleep. The Delta is also home to a lighthouse, an old mill, and a nuclear power plant. The people working in the power plant say that the fauna of the Delta is amazing, and it is the only place where sabertooth pelicans and three-headed cormorants can be seen. UNESCO has officially declared the Delta to be "Not a total piece of crap".

The oldest human settlement on the river Danube is the town of Nagycrap, in modern Hungary. It was inhabited by highly sophisticated Sumero-Scythians, who built palaces of pure gold and experimented with space flight. It is said that they left for Mars one day, but they vowed they would return just in time to mix with Huns and Avars (who together with donkeys gave birth to the modern Hungarians). The river was later part of the Gypsy Empire's "Limes Germanicus" (literally, Germ Frontier, as using soap was prohibited in the empire, and eternal damnation was upon the one who used it anyway).

Some other early cultures include the Proto-Disco culture, not to be confused with the ancient culture of Funk from what is now Oregon in the United States. The Ustasa culture, discovered in modern Croatia, is characterised by homes and temples built entirely from willow trees. As a symbol of their connection with their ancestors, modern Croatians hang a Serb on a willow tree every Thursday ("Ustasa" means "Thursday" in modern Croatian), on a bank of the Danube. The Cucumber Pot culture, developed in modern Bulgaria, was characterised by ritualistic cucumber shaped pots, from which sacred wine was drunk. The priests would dress in chicken costumes and throw themselves in the Danube, saying a prayer in order to not get wet. If the priests came out of the Danube wet, their heads would be cut off and ritualistically eaten. The "Slota" (Slaughta in English) culture developed in modern Slovakia, and its representatives made boats from which they attacked the town of Nagycrap. If they ever found a Sumero-Scythian who was looking away, they would immediately slaughter him, screaming "Ajde na pizdu materinu" ("This is because you will turn into a Hungarian"). We couldn't forget the Pelasgian culture, found in modern Romania, led by Giorgianus Armanianus, who was sometimes called "Danubianus" because of the habit of Pelasgians of adding "anus" at the end of most words. Papyrus found in the region revealed that the ancient Pelasgians considered that being a fashion designer doesn't necessarily mean you are gay. The ones who were found to be gay, though, would be drowned in the Danube.

The Danube is a source of water for many people, except the Germans and Austrians, who prefer to drink beer prepared from dandruff, rotten boughs and mountain goat's piss. The Danube is the only source of water for Hungarians, who worship their only lake, Balaton, like an almighty god. Serbs and Croatians try to use the water to fabricate chemical weapons, as they consider chemical warfare more civilised than fighting with your bare hands. Romanians oscilate between using the water for drinking or for washing their cars or even their Dacias (Renault toy cars).

The Danube is used to connect South-Eastern Europe to Atlantis, the land of Christopher Columbus and tiny cowboys. Atlantis uses the Danube to export beef jerky (mostly to Romania and Bulgaria), and imports fake watches and used tennis shoes. It was suggested that a Danube channel be build to reach Hyperboleea, considered by some historians as the original homeland of most Europeans from that region. Indeed, Hyperbole Day is the national holiday of Romania, Hungary and Bulgaria, being unofficial in Serbia, Croatia, Slovakia and Ukraine. Transport on the Danube is sometimes made more difficult by the USA, which randomly bombs bridges in order to fight the smuggling of cocaine and to prevent Arabic students from reaching Eastern European universities. 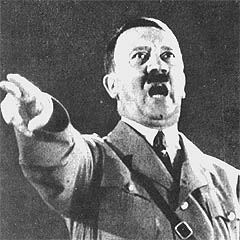 Hitler was born near the Danube

The Danube is like the only beam of light for some of the countries it passes through. In celebration of it, national parks were built in several countries, where people can go and pay their respects to the generous god-river. This national parks include the "Beer da'know" in Germany, a tribute to the Unknown Beer. Germans are said to drink anything as long as it has a beery colour. In Hungary, there is the Duna-Horthy Mocskos Park. There, the spirit of the great admiral Horthy (Hitler's tennis partner) is considered to still roam around the Danube bank, asking people for loose change so he can give the Führer a call. In Serbia, there is the famous Pigeon National Park, a testament to the brave heroes who managed to drown Albanians in the mighty river (Serbians call Albanians "pigeons" because all the good insults were taken). In Romania, there are two important national parks, the Iron Guard National Park, built as a testament to C.Z.Codreanu, who died for the cause of having kittens in every school and never prohibiting Jews to attend college or get a job or live. The other one is the Biosphere Reserve of the Danube Delta, where the Tyrannosaurus Rex and a younger version of J.R. from Dallas can be seen. The visitors are instructed not to feed the poachers. In Bulgaria, there is the "Persian National Park", because historians worldwide agree that Bulgarians originate from sophisticated Persians, not some crappy vulgar sandmonkeys.