From Uncyclopedia, the content-free encyclopedia
Jump to navigation Jump to search
Flight, and why its so darn good 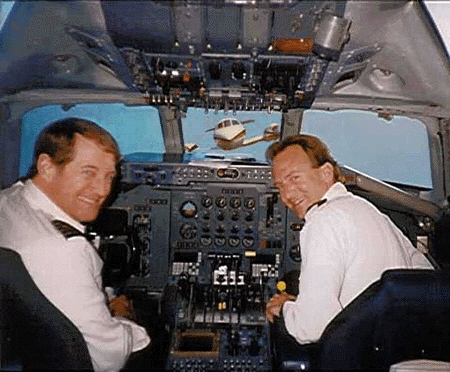 “The knack of flying is learning how to throw yourself at the ground and miss.”

~ The Hitchhiker's Guide to the Galaxy on Flying

“And missing the ground can be quite hard indeed, for it's usually quite big.”

Us humans have attempted to fly since we have been mere protozoa (well, us “future humans who are currently in the form of protozoa but just wait a few million years and then we will kick your ass”). Now, from our in-depth readings of The Hitchhikers guide to the galaxy, we know that all you have to do to fly with no support is to chuck yourself at the ground and hope you miss. After breaking my pelvis, I am beginning to doubt this theory- although some people could just be laughing at me because I still haven't mastered it, yet. Flight is 89%fun and 11% impossible. 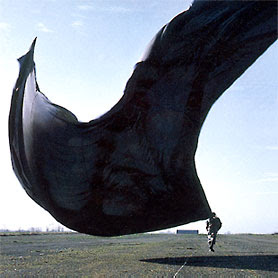 Nobody knows what happened to this man after he decided to go flying.

Many people have heard of the old “jump and angels will carry you down” trick, but since this is assisted flight, I don’t much care for it. So remember, even if you think its flight, but you have other means of supporting yourself, then it is not true flight, which is what I’m talking about here.

The Scientific vs. The Downright Unbelievable[edit]

Now, the scientific way of flight is simple. Shoot your-self into outer space. You are weightless there, so you are, by my definition, flying. But hey, you can’t go anywhere because if you attempt to get out of the spacecraft, you die. And it’s not funny death too. Because dying of cancer and/or exploding is funny. You freeze, or you burn freeze. You won’t be there to feel it though, because the vacuum cleaner will suck you off, asphyxiate you. On second thought, you probably will feel it. So flying, the symbol of freedom, is not truly true in this sense.

The downright unbelievable, is contrary to popular belief, quite plausible. For anti beings. Now, this theory is unproven as of yet, but many studies show some incredible results. Here it is. Garden tools. They are a source of immense power. They are the things that got me thinking of flight in the first place. (Though I do discourage the use of lawnmowers, they are fiendish beings, and will have your leg of in two ticks. To the untrained eye, garden tools are a simple utensil used to tidy up the backyard. But it is simply untrue. The prongs have some quite fascinating proprieties. If you own a shovel, go sit with it for a while, you may just find out something. Unfortunately this method is also ‘impure’. We are using something else to power our flight. I must concede loss on both fronts, and go back to the old way.

An attempt, to say the least

inertia of a falling object is equal to the square root of craig's head divided by the absolute value of a panda. pwnage. physics is the greatest class ever, especially when being taught by the infallible Tunisian Bechir Garraoui. This leads me to another startling conclusion, that mr. garraoui is in fact bill gates. he owns houses on three continents...how is this possible on a teacher's salary? fact is, it's not. what really happened was he invented Microsoft and hired bill gates as an actor to take all the credit so garraoui wouldn't ever get into trouble with the onwers of mac's and other sub-par computers. shmeelblique. shaz bat. garraoui for governor of California in 2012. physics is a science that essentially takes the mystery out of life and ruins holidays like Christmas and Easter for small children. how is it physically possible for a large-bellied overly-enthusiastic man to sneak into the houses of all the small children in one night? talk about pedaphilia, jeese, michael jackson don't have crap on santa claus. anyhow, back to aviation. flying is fun. the end. =)

This is the easiest part. Well, it depends. Most people do it first time. And then fall heavily back to earth. It’s the shock of flighting, you see? Anyway, all you need is a scantily clad (If you can’t get them nude) member of the opposite sex. This will immediately stop you thinking about the ground, especially if you are male. (Note: works best if partner is from 18-25) But, when the reality kicks in, it all happens very fast. Only the first few second of your flight will be real flight, but it will get harder. Your partner will stop distracting you as much. So that’s it to start…

The tricky part, it relies on the knack of learning to throw yourself at the ground, and miss. No mater how many times I try, I often can’t stay for very long. This is the part where we see the men from the boys. I’m a man. I’m got to little imagination. I suggest taking a book and several very interesting and strange things, so you can forget completely about gravity, which is a dirty whore, and always pulls me down. Once you’re up there you might want to land.

to stay in the air requires a mechanical devise ie a plane, helicopter or glider etc

There are three kinds of landings, the swoop, the short fall hover stop and the Crash. The crash, being the easiest to master, is also the most painful. However, the swoop and the S.F.H.S. both have there own advantages and disadvantages. The swoop is a lot easier than the S.F.H.S. but it is also a lot longer. From a large height, it takes ages. It is more accurate though. The S.F.H.S. is harder, less graceful, and can easily become a crash. It involves the flier to fly, suddenly fall, miss the ground a short way from the earth, and land on ones feet. It is faster. That is about it. You could frighten random people in the street, though… Unfortunately from such a height the "landing" may cause symptoms such as death...

remember to put your wheels down!

Mainly used by those beginning in the art of flight. You often see the disciple’s eyes swivel in an attempt to stop thinking about the ground. Those who use this technique are often beginners.

Used by slightly less novice flyers. It is still ungraceful, and also lame. The flyer is often trying to attempt a couple of swoops, fails in one of them, and crashes to the ground. As you can see, a large amount of discipline is needed to master the art of flying.

Possibly the most dangerous flight for a beginner. The flyer flies straight up, hoping that the sky will stop him thinking about the ground. But often, it’s too late. Divers, to gain larger height, also use this. It is illegal in all sporting competitions, and if caught using this technique you will be put into an Xbox 360(and/or PS3) and be thrown into the black hole in the centre of the galaxy (this will cause you to be squeezed into a string of spaghetti and die).