“According to all known laws of aviation, there is no way that Untitled Airlines should be able to fly.”

Untitled Airlines is an airline based in the Untitled States, but is still allowed to fly outside of it. Established in 1974 after a minor clerical error led to a corporate merger between Northwest National Airlines, the Muay Thai Boxing Association, and a disorganized sock drawer, the company is one of the largest operating airlines in the world and is known to cause cancer in the state of California.

The company is world-renowned for its planes, which feature both wings and wheels. They are ranked among the airlines in service in customer satisfaction, and are famous for their notoriety.

National Northeast Airlines was founded in 1926, and they were the first to prototype horse-powered airplanes. Fortunately, that did not take off. The company soon adopted external combustion engines, and for years led the way in innovation by introducing floating seats, gum-free cup holders, and complimentary oxygen within the plane cabin.

In the 1950s the company exploded onto the transcontinental market, particularly in 1955 when a passenger planted a bomb in a plane. They also decided to rename the company because they didn't just fly in the Northeast, but couldn't think of a better name, so they chose "Untitled". Later, three rival company airplanes belonging to Hughes Aviation and American Mideast Airlines failed to use their turn signals, smashing Untitled's airplanes mid-flight and killing more than 2,000 incivilians.

For those without comedic tastes, the so-called experts at Wikipedia have an article about them. 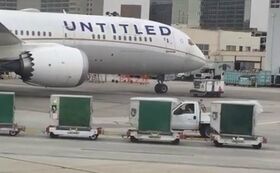 In 1958 the company leased their first McDonald Douglas DC-8 from Lord Xenu, but four engines was too many engines so they bought Boeing 727s, which have three. The company also expanded their food service menus to include both chicken and fish. In 1959 heavy metal singer Buddy Holly boarded a four-seater owned by a small private company. (Historians contend that if they had flown with NNA they would probably have lived forever.)→

In 1969 the company launched a bold eco-free initiative which included washable and reusable toothpicks, washable reusable toilet paper, used cow crap as fuel, and promoted fewer rats and cockroaches in the overhead compartments with highly visible signs. By the 1970s they began using wide body jets such as the Boeing 747. Since they were huge, they never had enough engines (four was still not enough), and therefore a majority of them ran out of power, not being able to take off, or falling and crashing. They thought about expanding to six engines, but those kept falling off the planes so they ditched the idea.

Meanwhile, the Muay Thai Boxing Association, founded in 1955 by Derok Jeng, had established a competitive circuit in South East Asia. Their championship league, better known as the "Championship League", featured such heavyweights as Floyd Bongbong Ali and Thai national hero and sex symbol Thomas McAllison. The controversial 1972 duel between heavyweight champion Lester "Baba Booey" Green and the last captive Tasmanian Tiger led to a famine in the Congo and the leaking of the Paris Hilton sex tape decades later. Facing pressure from advertisers and a human rights investigation by the International Criminal Court, the company burned all its documents and purged its membership before going public with its stocks and seeking partners for a corporate merger. 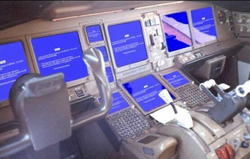 In 1971 a small sock drawer in New Jersey was established. The first year was a near ruin, as poor management and looming bankruptcy threatened its operations. Despite constant losses – typically blamed on the local clothes dryer – the sock drawer remained open through 1972.

After a number of reorganizations, the drawer finally toppled on a rainy day in April 1972. No one was sure where to place the blame for the final clothing closing. Some of its operational difficulties were blamed on cultural "mismatches" as some socks reported feeling "stepped on". Others remained balled up, unwilling to speak with the press. Eventually most of the staff found work in clothes baskets, underneath beds, and budget puppet shows, while others remained hopelessly lost.

The drawer re-opened in 1974 after being stuck for nearly two years.

The newly formed airline relied on the strengths of its components. Employees of the Muay Thai Boxing Association were hired as attendants, which resulted in a 58% reduction in backtalk from passengers and a 58% increase in passenger injuries, which are completely unrelated. The unique organizational structure of the disorganized sock drawer was adopted, which increased lost luggage claims, headaches, and interestingly, revenue.

In 1981 American Airlines launched its highly successful frequent flyer program called "Buy Fifty, Get One Free"; in response, Untitled launched their own called "Buy, Or Else". The program has been lauded for its brutality and efficiency, as customers who do not enroll in it (or PremiumPlusExtraMore™ rewards, or who do not refer their friends) are subject to knees to the groin and elbows to the jaw – and, even worse, additional baggage fees. Meanwhile people kept forgetting the long name, thus MileageMinus®.

In September 2001 several Untitled Airlines pilots from Egypt and Saudi Arabia attempted to emergency-land a small plane in Manhattan, resulting in a minor misunderstanding and crazed conspiracy theories that the event was part of a terrorist attack against America by Al-Qaeda, an independent airline based out of Kabul. The tragic event killed thousands of potential customers. 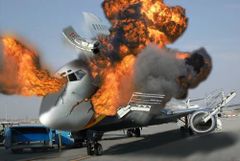 The company has never had any controversies. Untitled Airlines has crashed only forty planes in nearly two hundred years of operations, with a death toll so insignificant they are not worth mentioning. ("Survivors" were compensated with five percent off their next subscription to Condé Nast Traveler.)

Despite popular misconception, Untitled Airlines has never cancelled overbooked red eye flights to New Zealand, nor have they played White Chicks as an in-flight movie, regardless of what Amnesty International reports. According to Google Flights, Untitled Airlines flights are never late, and often arrive twelve hours early. Most notably, on April 9, 2017, a violent paraplegic who was probably racist and definitely smelled bad was politely carried out of an overbooked flight in Chicago O'Hare Airport on a very comfortable first-class stretcher. Passengers find the seats so comfortable and spacious that they must be dragged out of them.

Featured Article  (read another featured article)
Featured version: 27 August 2019
This article has been featured on the front page. — You can nominate your favourite articles at Uncyclopedia:VFH.