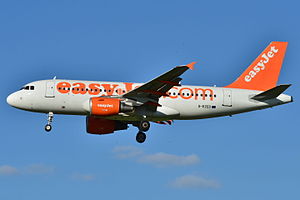 ~ Corpse of Ghandi on EasyJet

EasyJet, also known as "The skank of the airways", is a discount airline that serves many European airports. Their primary customers are thrifty, drunken Scottish people, although they are also popular with English football hooligans, fat American tourists, and penguins. If you want to purchase any goods on board then you can't. Unless you are made of money because it costs about £200 for a sandwich and about £500 for a can of coke, well i say 'can' more like a drop of coke. The robbing bastards!

For the uncouth among us who choose lies, the so-called experts at Wikipedia have an article about EasyJet. 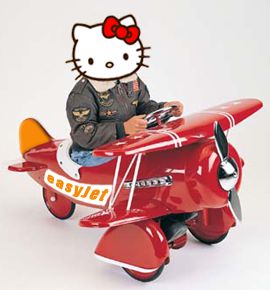 The first EasyJet flight, piloted by Hello Kitty herself!

Founded by Hello Kitty in 1988 under the name StingyJet, the company gradually established itself as the carrier for cheap people who didn't require such travel luxuries as a personal television, a meal, a seat, or living.

Their initial flight was made by Hello Kitty, using a replica of the Red Baron's plane made of hamster skins. Due to fears of an encounter with the Flying Spaghetti Monster the flight had no actual passengers. It ran from eastern Glasgow to western Glasgow. Among the first commercial passengers were Sean Connery, Sean Bean, Sean Young, and Shorn Scrotum. 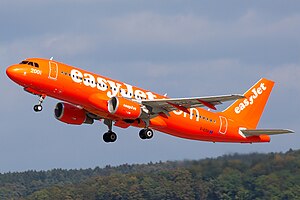 The first year in business brought wild success, with consumer magazine "What?!" giving it a rave review. But alas, the good times were short-lived. After Brutish Airways' devastating smear campaign, in which Hello Kitty was depicted as a blood-thirsty human-hating kitten (which ironically was true), consumer faith crumbled.

Times were desperate, and so in 1999 the eternally damned minions of Satan (a.k.a. marketing executives) demanded a re-branding. Catering to the carnal whims of the Dot Com boom, the company's name was switched to EasyJet, and its mantra changed from frugality to sexuality (although cheap pricing remained important). With promises of gratuitous sex and membership of the Mile-High Club, the airline once again 'took off' (pun definitely intended).

Stelios Haji-Ioannou, the 3rd Baron von Easyjet, bought EasyJet (mainly because it was named after his baronial title) in 2000, with the main hub located at easyLand in London Luton Airport. The idea was to offer cheap, no-frills scheduled air services within Europe. Over the years they have expanded larger and larger, taking on more and more routes, and this growth shows no signs of abating. Stelios retired as Chairman and director of easyJet plc in 2003 but they remain true to his principles of entrepreneurialism. They have helped to revolutionise air travel in Europe, become a superbrand and starred in their very own 'fly-on-the-wall' documentary (Airline).

Recent years have brought continued success for EasyJet. Rumours abound that the airline will soon be renamed SleazyJet, although Hello Kitty vehemently denies it, stating: "You'd better shut the f*@% up bitch, or I'll bust a cap in yo ass!". 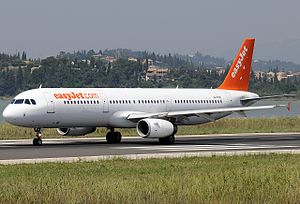 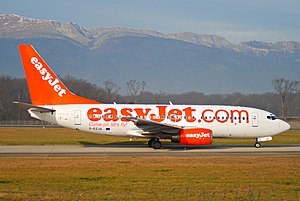 The company now has all the reject planes from bigger airlines, therefore it ended up with a few planes from a few companies. The fleet mainly comprised of old Boeing 737-100s. There was probably 100 of these planes, that is, until they all fell apart and a large British Scareways flag was left with a banner saying "SHAME F*C£3RS"

EasyPeazyJet re-assembled a number of these planes from the large pile of rusty metal and began to paint them white. However they ran out of paint so most of the time you are left with the rust which is so old it looks bright orange. EasyPeazyJet then went to the local brothel at Luton Airport and tied up all the contenders there. They were then sent for a day with the men piolets (hostages from Virgin Pacific) and that was training done. So now EazyPeazyJet are looking for more reject planes and more bits of metal.

In 2005 the very difficult decision was taken to add a landing gear to the aircraft in the EasyJet fleet replacing the previous "Flintstones-esque" system of removing the undercarriage and forcing the passengers to run for the take-off. 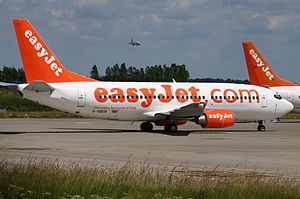 One question that remains unanswered however is "How the hell do we get into easyLand?". It sounds like a magical place, almost akin to Willy Wonka and his Chocolate Factory, abundant with easyBeer and easyWomen (could this be the name of on-flight hookers?). Perhaps they could incorporate a raffle for easyTickets into their Ultimate Fighting style race for seats on their flights (people will kill for the exit row). Underneath a lucky someone's seat will be a golden ticket that will let them in to the easyLand of their dreams. And unlike Willy Wonka none of the ticket winners will be spoiled rich brats as anyone on the flight must be so poor that saving 50 pence on a flight makes all the difference to their lives.

As a brand 'easy...' has branched out into many other areas, including:

Other ideas possibly (or not) in the pipeline are:

It costs £75 to fly British Airways from Gatwick to Barcelona, it costs just £60 to fly Easyjet from Luton to Barcelona, both flights take roughly two hours, so the question you have have to ask yourself is: can you drink £15 worth of BA's free alcohol in two hours? Well can ya punk? 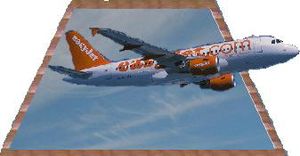 Double-framed destination of Outta The Frames