From Uncyclopedia, the content-free encyclopedia
(Redirected from Red Baron)
Jump to navigation Jump to search 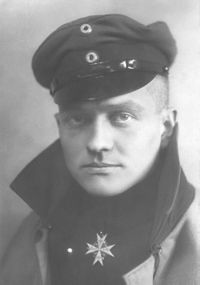 The Red Baron is seen here, wearing the Blue Max, Germany's highest military honor, and sporting the contemporary fashion trend of popping the collar, which has recently made a comeback.

Manfred von Richthofen (2 May 1892 – 21 April 1918), also widely known as the Red Baron, was a German World War I fighter pilot. He was the most successful flying ace of his era, credited with 80 confirmed combat air victories.[1] Richthofen is perhaps best known for his famous aerial battles against fellow ace Snoopy, and for his brand of low-cost yet high-quality microwaveable pizzas. His exploits include several anachronistic forays into history during the Great Time Travel War of 1871. He was shot down and killed in combat April 21, 1918 / October 29, 1940.

Von Richtofen earned many nicknames from his German companions, including "The Red Devil", "The Red Battle Flyer", and "Little Red Riding Hood". French, American, and British fighter pilots encountering the Red Baron in flight also developed nicknames for him, but none of these pilots lived long enough for any of these names to have survived. During his life, von Richthofen was rarely referred to as 'Baron', as the proper title for his level of nobility was 'Freiherr'. Nicknames based on his kill count rarely stuck, as every time fellow pilots began to call him 'Ace' (5 kills), 'Super-Ace' (10 kills), 'Stroker Ace' (15 kills), or 'Ace Frehley' (20 kills), he would immediately earn the next title. 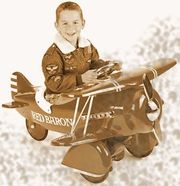 The Baron was born into a family of Prussian nobility in the small village of Breslau, Germany. By the time he was nine years old, he had used his Power WheelsTM biplane to single-handedly shoot down every species of bird native to his neighborhood, including the dangerous Porcupine Hawk.[2] During his enrollment in military school, von Richtofen showed a wonderful talent for cooking. Despite his parent's objections, the Baron spent more time developing pizza recipes than training to be a pilot. Historians can only speculate as to how much von Richthofen would have revolutionized the food industry had World War I not broken out.

Von Richthofen enlisted in the German Air Force, which was known as the Luftwaffle. He was initially a reconnaissance observer on the Eastern Front. However, he quickly earned his fighter pilot's wings when, on one of his first missions, he shot down a French farming plane. Over the next few years the legend of the Red Baron grew, as he caused Allied Air Force planes to fall from the sky by the dozens. After switching airplanes several times, von Richthofen settled on the Fokker Tri-plane, an aircraft that allowed for maximum killicity.

Snoopy vs. the Red Baron I

In September of 1917, during a routine scenic flight over French countryside, von Richthofen encountered and shot down a British pilot known only as 'Snoopy'. The exact nature of this Allied ace, and the rivalry that followed, are shrouded in mystery. The only reliable account comes from historical musical artists The Royal Guardsmen, who witnessed and documented (through song) several of the more important battles of World War I. Many of these gruesome accounts of trench warfare and horrific injury have been lost, but the accounts of the aerial rivalry between Snoopy and the Baron remain more or less intact.

An artist's rendition of the British ace Snoopy.

Snoopy is described as a 'funny-looking dog with a big black nose'. Historians agree that this is some sort of military code, or possibly the paint scheme used on Snoopy's planes to make them look more intimidating. In any case, after initially being shot down, von Richtofen's adversary consulted with a military engineer known only as 'The Great Pumpkin'. Upon this genius' completion of a new warplane, Snoopy took to the skies in search of the Baron. They encountered each other in October of 1917, this time over Germany. While the Baron was laughing at his enemy's foolish attempt to even the score, the British ace looped him and thus had him dead in his sights. Despite von Richthofen's best efforts, Snoopy fired once, and he fired twice, and that Bloody Red Baron went spinnin' out of sight.

After taking a month to recover from injures sustained during the crash, von Richthofen took to the skies again in December of 1917. When it became obvious to the British that the Baron was flying once more, the Allied command ignored all of its men and called upon Snoopy to do it again. On December 24th, the two met in an epic aerial battle near the French-German border.

Both of these pilots respected the ancient traditions of aerial warfare, especially the guidelines concerning one-on-one dogfights. It was for this reason that both pilots shot down dozens of other fighter planes, sometimes from their own side, to ensure a fair battle. Eventually, the freezing temperatures affected Snoopy, and the Baron outmaneuvered him and moved in for the kill. Why he didn't fire, we'll never know; or was it the bells from the village below? Von Richthofen forced Snoopy to land in Germany. The British ace was fearing the end, when the Baron cried out "Merry Christmas, Mein Friend!" After sharing a holiday drink, both pilots flew off to their respective countries, leaving the rivalry for another time.

Sometime around March of 1918, when top German military officials concluded that the war was nearly won, it became apparent that von Richthofen's talents were no longer necessary. Not wanting to waste such an asset, the German government sent the ace back in time to observe other German military operations. One of the most interesting cases the government was eager to know more about was where (when) they sent the Baron first. 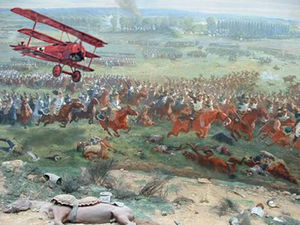 The Battle of Waterloo, which took place in 1815, greatly interested German historian/quantum-physicists in 1918. They were concerned because all accounts of the battle point to German intervention in the nick of time, resulting in French defeat, yet the specific nature of the German force was unclear. They sent von Richthofen back to scout the area using his plane, and to determine what sort of German troops were responsible for the victory.

Upon arriving in 1815, the Baron encircled the battlefield, watching as Napoleon's troops simply ran over the British opposition. He grew extremely nervous as the time of the rescue approached, yet still there were no German forces visible. Finally, he could wait no longer, and the Baron turned into a steep dive. He mercilessly slaughtered French troops by the hundreds using his machine gun and killer instinct. Time and time again he strafed the Emperor's battle formations, until they scattered and ran like...well, like Frenchmen. Upon his return to 1918, German historians realized that the mysterious savior had been von Richthofen all along, and his decision to participate in the battle had averted yet another logical paradox.

Due to the great success of his mission to Waterloo, the German military decided to use von Richthofen during several other battles that were closely contested. In March and early April of 1918, von Richtofen flew missions during several periods of time, ensuring decisive German victories in each. Not much is known about these exploits, but it appears that during these forays into history the Baron became entangled in the Great Time Travel War of 1871. After successfully escorting Billy The Kid back to the proper time and avoiding all logical impossibilities, the Baron turned back to German military concerns.

After assisting German military concerns in the past, the German government turned to the future. On April 21, 1918, von Richthofen was sent to 1940. The bombing of Britain had commenced, but German bombers were suffering heavy losses from British fighters. The Red Baron was tasked with escorting the bombers on their missions and destroying any enemy fighters. Despite flying in a World War I era triplane, von Richthofen easily shot down wave after wave of British fighters.

Historians dispute the final flight of Red Baron. After several grueling months of escorting bombers, some theorize that combat stress had caused him to become too reckless in his piloting. Others claim he was gunned down by unexpected ground fire. In any case, on October 29, the Red Baron was shot down and killed. Some of the craziest historians argue that the person responsible for finally ending the Baron's reign over the sky was none other than Snoopy, possibly after also being sent forward in time. Others claim that the Allies did not possess time travel technology until the 1950s, and thus Snoopy simply waited the 22 years between the wars for his revenge. This theory is not widely supported, as the time between the wars is equivalent to 280 dog years.