From Uncyclopedia, the content-free encyclopedia
(Redirected from Waterloo)
Jump to navigation Jump to search

For the uncouth among us who choose lies, the so-called experts at Wikipedia have an article about Battle of Waterloo.
“Waterloo - I was defeated, you won the war, Waterloo - promise to love you for ever more, Waterloo - couldn’t escape if I wanted to, Waterloo - knowing my fate is to be with you, Waterloo - finally facing my waterloo.”

~ Napoleon on Battle of Waterloo

“You take my life but i take yours too... You fire your french mosquet but i run you through... There's a human wave on the other side of the wall, {insert random cliche}”

The Battle of Waterloo was fought on Sunday, 18 June 1815, near Waterloo in present-day Belgium, then part of the United Kingdom of the Netherlands. Napoleon "Dynomite" Bonaparte led the invasion of Normandy here using his 900,000 crack Hussars in an attempt at destroying General "Beef" Wellington and his assorted culinarialy named soldiers. Wellington was certain he would win, for the French army had never won any battles before. Up until this time Napoleon "Dynomite" Bonaparte was in possession of the Rosetta Stone Column and defended it from General Wellington until the Sweedish Generals of ABBA, Björn, Frida, Agnetha, Benny and Stig arrived aboard the giant Sweedish Fish in the ensuing confusion the Column was stolen by Wellington along with one of Napoleon's younger Irish decended Hussars, Seamus.

The two Generals prepared for the war in very distinct ways, which are often utilised to encapsulate the differences between the two men's characters. Wellington, spent time at a picnic, with Lord Sandwich, the Duke of Muffin and Lord Swedishmeatballs. Bonaparte on the other hand, spent his time with a number of other Napoleons, engaged in a lively conversation about reincarnation.

A little after two, Wellington had just finished lunch, on the 18th June 1815 when Napoleon launched an attack on Hougomont Farm. Wellington, who had intended riding down and purchasing some sausages and cheese was incensed. Shifting his attention to the nearby farm of La Haye Sainte, which had a good reputation locally for it homemade wine, Wellington found French Cavalry had already taken the supply.

Miffed to the point of using bad language (French) Wellington ordered his battalions on either flank to take the farms at all cost. Napoleon, who had spent most of the afternoon talking to himself, saw his chance, and ordered his Old Guard to attack down the center as he Kung Fu chopped his mom. Wellingtons army was in turmoil, and defeat was certain, until, by chance, one of the attackers remembered they were French and the whole army turned as one, in a tactical redeployment in the opposite direction, as quickly as possible. 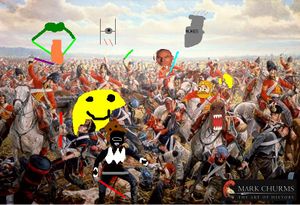 When someone fucked up with history 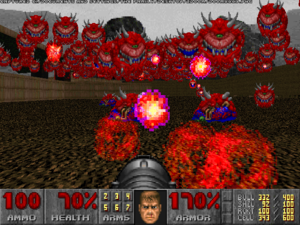 The Battle of Waterloo

Meanwhile, as the allied armies fell back over to a field to form squares, Marshal Ney attempted to do banzai (with cavalry) whilst Grouchy spent most the early evening Mastrubating behind a tree. The Netherland's only actual involvement (as well as that of Brunswick and Nassau) was to fill in for Britain during Hourly tea breaks. Prussia, meanwhile showed up six hours late for battle and began fighting in the village of Plancenoit. They spent most of the day fighting the imperial (old) guard, a very small troop composed of old man who were hopelessly outnumbered compared to the Prussians, yet it took them almost the whole battle to take it from the elderly Frenchmen. But Prussia is still very proud of the victory and like to claim that waterloo was a Prussian, and Prussian only, victory. And indeed it was. I mean come on, who else in history could capture a small shit village in the middle of nowhere (I.E Belgium) from a tiny group of old men with no cavalry and very little artillery in a matter of five hours. An incredible miltary victory! But it dosn't end their for Prussia, no, they were able to pursue the French after the battle. Who were all wounded and had surrendered anyway, so it was kind of pointless. But what you must remember for this was that in the 1800's, Prussia was irritatingly obsessed with war, but shit at it.

With a shout of "La garde receuil! La Garde est un baguette!" (The Guards retreat, the Guard is a baguette!) Wellington rushed to the farms to secure a goodly supply of tucker.

Napoleon was banished to St Helena, whilst Wellington and the troops enjoyed a slap up meal at the expense of the Frenchies. Hurrah! Sadly the battle continues to this day along the borders of Onatario and Quebec between ben harper and jean pi'erre raffareanuaux.