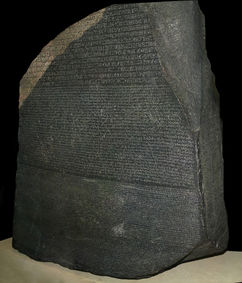 Some have criticised the Rosetta Stone's lack of readability accommodations for the farsighted.

The Rosetta Stone is an ancient Egyptian artefact with engraved text that provides The Fastest Way to Learn Egyptian Hieroglyphics. Guaranteed.™ The product was issued courtesy of the Egyptian court, and made available for public use at all gods-fearing temples. After falling out of use, it was rediscovered by European archaeologists, who discovered that the Rosetta Stone guarantee still held after two thousand years.

Egyptian hieroglyphics had been the standard writing system of ancient Egypt for several thousand years, since evidently nobody could think of a better way to write than by painstakingly carving pictures of gods and flamingos on stone tablets. However, due to gradual emergence of other civilisations and thus external cultural influences, especially by bloody conquest, the Greek language became the official language for all administrative purposes, necessitating the complete and total translation and renumbering of most government forms, which, for the bureaucrats involved, must have been a bitter taste of their own medicine, not in the least because of the amounts of papyrus involved. In addition, in a governmental effort to increase literacy rate from a mere 1.6%—particularly meager in view of the fact that the Egyptian elite and priests actually made up 2.2% of the population, not to mention probably closer to 0.16% since most census takers at the time were also likely illiterate—the government had already promulgated Simplified Hieroglyphics (hieratic script), which then had become the most common writing system amongst commoners, and was eventually succeeded by Simplified Egyptian (demotic script).

By the time Ptolemy V came to the Egyptian throne, in fact, these efforts had become so popular that the usage share of Traditional Hieroglyphics had fallen dangerously low, even with the Egyptian elite. The high priests of the land, who still held knowledge of Traditional Hieroglyphics and were not just pretending, decided that it was time to take action. They devised a natural immersive language instruction stele through which the pharaoh could Learn Like a Child™—a dangerous gamble, since the pharaoh was 13 years old and may very well have been insulted at being called a child. 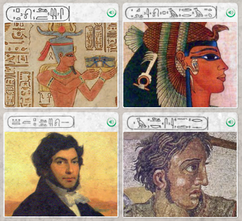 The Rosetta Stone courses themselves are divided into three levels of increasing difficulty:

Originally the Rosetta Stone was designed to accommodate three scripts: Traditional Hieroglyphics, Simplified Egyptian, and Greek. One revision was attempted in 1802, when additional inscriptions were made in English; however, the course designers only got as far as translating the phrases "Captured in Egypt by the British Army in 1801" and "Presented by King George III".

Initial prototypes featuring pictorial aids and GUIs (godly user interfaces) met poorly with the pharaoh, who found them out of place in ancient Egypt.

Two millennia later, long after the Egyptian priesthood had their mummified hearts weighed against a feather, a surviving fragment of the stele was found in the Egyptian port city of Rashid, but was nonetheless dubbed Pierre de Rosette after the French explorer who discovered it. (Pierre de Rosette was later given the Legion d'Honneur, and went on to invent the rosette.) Consequently, the first European to complete the course was also a Frenchman, Jean-François Champollion, who, upon finally completing Traditional Hieroglyphics Level 3, cried "Je tiens mon affaire!" ("I've had enough of this!") and fell unconscious for five days.

Contemporary critics agree that Rosetta Stone's content is impractical for the typical tourist or businessperson making a jaunt to ancient Egypt. Several articles complained about the lack of a separate dictionary or grammar reference, which would have made everything a great deal easier for 19th-century Egyptologists. One review in particular noted: 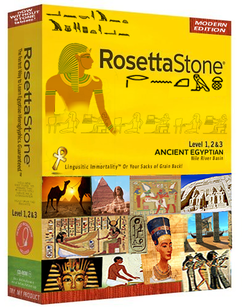 After numerous complaints from the Egyptian Ministry of Culture, and despite massive budget cuts in cultural endeavours, the British government finally did produce a replica of the artefact, albeit one with questionable credibility.

The End Pharaoh Licence Agreement for the Rosetta Stone was recently unearthed by a joint expedition of lawyers who believed shrink wrap contracts dated back to Egyptian times and were thus protected by precedent. One section in particular was of great interest in the media:

The British Army had forcibly transferred rights to the Rosetta Stone from the pharaoh's cold, perfectly preserved hands to the British Museum in spite of this clause, and the Egyptian government views this as additional evidence for the fundamental wrongness of the transfer of the artefact to European hands. A spokesperson from the British Museum issued a statement in response:

For those without comedic tastes, the "questionable parody" of this website called Wikipedia have an article about the Rosetta Stone.