From Uncyclopedia, the content-free encyclopedia
Jump to navigation Jump to search
“Eeeeeew”

“The only thing worse than a dirty toilet is a dirty clip-on. EEEWWWWWWWWW!!!”

Ew (pronounced ee-Hugh) or Eew is a digraph in the Latin alphabet, used mostly in the French language in words that describe things that are very clean, beautiful and/or tasty, mostly classic gourmet desserts such as 当ufs à la merde (Dumped rotten eggs) and Bonbons de p当k (Vomit-filled bonbons). In the English language, it is used in only one word: Unnews. It was originally called UNNS (Uncyclopedia News Source) but was forced to have a letter added to it by the United Nations and by "The Nova Scotian" news site. Ew is also featured in the white Slang word jEW; The reasons for that could be remote for some people who "have a lot of Jewish friends", i.e. Mel Gibson. 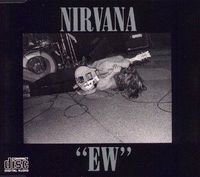 The Grunge bacteria known as EW (Latin: Bleachus Trackuno) is often injected to dying people in order to help them get into a nirvana.

In popular culture, Ew in its grapheme form 当 has been known as the official logo of gangsta rapper Eminem's official fan club, "∃WIИ∃W Я∩13Z". The logo first appered in his "Britney's mama's out of the closet" video, in a scene where Christina Aguilera is being raped in the ear by Paris Hilton's dog.

Scottish Archeologist and trainspotting artist Mark "Ewan the terrible" McGregor became famous after he discovered the Toilets cave. While he was shoving his head in the cave for the first time, he had to bend over and everyone were able to see his butt beneath his skirt. The females who were there has commented: "Eew, this guy's a real dish!" and that's how he got his nickname.

In sports, Shaquille O'Neal's dad, basketball legend and current supermodel Patrick "Ewing" O'Neal Senior, has been known for his common usage of Ew during games; For example, in 1996 he was blocked by Bugs Bunny (the most stoned NBA player ever) while screaming "Eeew!! It's a rabbit!". He later explained this with his great desire for rabbit meat and the fact that he was hungry.