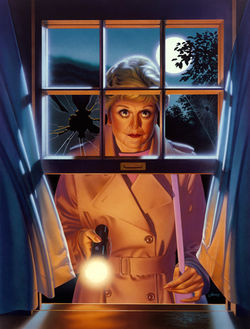 Portrait of the Artist as a Young Windowlicker.

Merde, She Wrote is a long-running French reality-television mystery series starring Angela Lansbury as mystery writer and amateur detective Jessica Feltcher. First shown on British and US TV during the 1987/88 season, the show was heavily influenced by the writings of both Henri Bergson and Spike Milligan.

Set in the villiage of Portmanteau, Jessica Feltcher is the matriarch of a huge family grouping, encompassing over 874 "cousins" and 2048 "nephews and nieces", to date. Each series begins with a traditional call for help from a family member, beseeching "Aunt" Jessica to come to their aid in locating a killer, proving their innocence, etc.

Each episode followed a similar theme, in which Jessica Feltcher would stalk her victim, stab them to death with a biro, and then hypnotise one of their friends into believing they'd committed the crime in the first place. The episode would then end shortly before Mrs Feltcher could be seen devouring her victims with fava beans and a nice glass of sauerkraut.

Although some liberties were taken with the true story (for example, there was little to no cannibalism or kitten huffing in the series, and Jessica's weapon of choice in reality was in fact a knitting needle rather than a pen), the series proved popular for the 26 years that it ran on the BBC. Sadly, many classic episodes were lost or destroyed when the BBC mistook them for episodes of Doctor Who, and little remains of the classic "Barbara Eden" version of Merde, She Wrote. 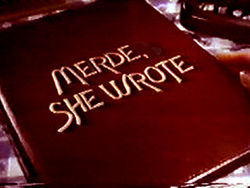 From the opening titles....

The series was widely condemned by the critics of the time, due to the graphic nature of the murders shown on screen, and the laugh track that would accompany each slaughter. But at least it wasn't "Joanie Loves Chachi". Several telemovies were suggested, but those making the suggestions were promptly shot.

Due to its overwhelming Frenchness, the series was often accused of utilising too numerous sniglets within the storylines. Jessica was often called upon to personally wrestle virile young stabilators to the ground, despite her ancienticity, which critics and viewers alike found incredulous. That didn't stop it from picking up a number of Emmy and Golden Globe Awards.

The chief focus that many of the Writers for the series worked towards was the subtle interplay between key characters, maintaining a level of suspence right until the end of each episode. Viewers would often piece clues together, until the final revelation (usually around five minutes before the end credits) when the remaining clue would reveal the true culprit.

The following example is from "Merde, She Wrote: Someone is Dead";

For the uncouth among us who choose lies, the so-called experts at Wikipedia have an article about Merde, She Wrote.

In many cases viewers would merely guess the identity of the Murderer by noting which B-List 70s "Star" was listed first in the opening credits. Other clues included "looking suspicious", "evil" background music and upperclass, often English or New England, accents.

Although Angela Lansbury insists on fresh meat a fresh cast for each episode, a small number of key characters have appeared in multiple episodes.

Featured Article  (read another featured article)
Featured version: 7 April 2007
This article has been featured on the front page. — You can nominate your favourite articles at Uncyclopedia:VFH.