From Uncyclopedia, the content-free encyclopedia
(Redirected from Stalking)
Jump to navigation Jump to search
“ I dont stalk him anymore”

“ It's no surprise, I've been watching you lately, I want to make it with you”

Love -- it's such a wonderful feeling. When you find that special someone, and you find out that they love you too, you feel like you're walking on cloud nine. However, every relationship goes through temporary rough spots, such as fights and breakups. Did your boyfriend ditch you for some floozy who's twice as thin and half as crazy as you? Did your girlfriend leave you for another woman, citing things like your "lack of feelings" and "violent tendencies"? Now is the time to show them that you really care. Now is the time to consider stalking your ex.

Most people have a mistaken impression that stalkers lurk in the bushes, waiting for their beloved to pass by. Nothing could be further from the truth! In fact, a good stalker always starts out by offering a line of communication. Or twenty.

Tip:
Communication is crucial in any relationship. They just don't understand how much you really care, or they would take your calls.
Tip:
The average answering machine has under 15 minutes of storage space.

Step 2: Work around their attempts to stop your lines of communication[edit | edit source]

Tip:
It takes more than ten thousand account registrations per day for your fingers to risk falling off, barring leprosy.

Let's say that, for some inexplicable reason, they haven't come crawling back to you. Worse still, they've blocked your emails and screened your calls. What can you do?

Remember: "No" means you're not trying hard enough.

Step 3: Lurk in the bushes, waiting for your beloved to pass by[edit | edit source]

Tip:
Poison ivy can be recognized as a vine with clusters of three leaves that meet at a central dot. 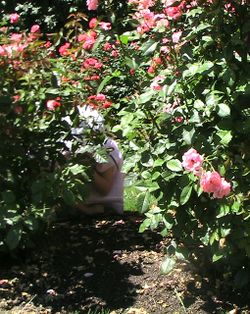 Notice how the white clothes give this person away. Match your outfit to your surroundings, and preferably stalk in low-light conditions. Be subtle.

Yes, it's true: earlier, we said that stalkers don't really do this. But some times, the object of our affection has so much trouble getting it through their thick skull that you'd cut off your own ear just for another minute in their embrace, that you're forced to do what a normal stalker never would. But you're an individual, which is why they used to love you so much, now isn't it?

Remember: If your beloved passes by, don't miss the opportunity to talk to them. You may need to jog or even sprint to keep up, so exercise regularly.

Step 4: A restraining order is just another way of saying: 'I love you'[edit | edit source]

Can a piece of paper keep you away from someone you really love, who would love you wholeheartedly in return if they only gave you a chance? Why would you risk eternal true love over some binding legal order? The law doesn't respect your feelings, so why should you respect it? 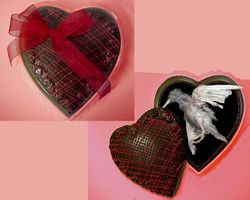 Give your beloved a bird. You can't *not* take notice of such a gift.

Your attempts to get your beloved's attention just haven't paid fruit yet? Haunted by thoughts of them with their new lover, whispering sweet nothings to each other while you freeze in the bushes outside their window? Let's face it, it's time to get creative.

Tip:
Gifts will seem the most generous if they are placed in their room before they get home.

Anything you can imagine! Surely you're not so uncreative as to give up, are you?

Remember: Your beloved will need frequent reminders that you know where they live, so let them know on a daily (or hourly) basis.

Quitters are losers, and you're no loser (are you?). Keep at it, and you'll be united with your beloved once again, whether in this world or the next. Only hard work and planning can hasten either outcome.

For those without comedic tastes, the so-called experts at Wikipedia have an article about HowTo:Stalk your ex.
v · t · e
( v · t · e )
Crime

Featured Article  (read another featured article)
Featured version: 1 November 2012
This article has been featured on the front page. — You can nominate your favourite articles at Uncyclopedia:VFH.