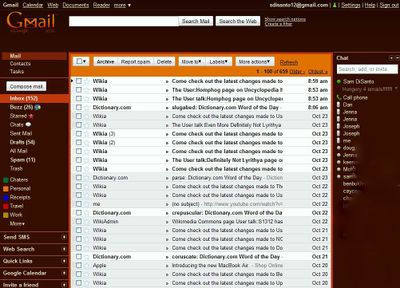 For those without comedic tastes, the so-called experts at Wikipedia have an article about Gmail.
“With gah-new Mail, I am Gandalf and let sparks of magic radiate from my fingertips as I cast prosaic spells with every meta-command sequence”

Ahoy Good Citizens! I am confident your friends of refined character have shamelessly abashed you with GMail or GNU Mail facts. No? GMail is a gentle and jovial executeable afrodesiac hand crafted to give you asynchronous communication ecstacy. Impossibly easy to understand; unfathomably simple to use, picking GMail is the smart decision that will help catalyze a spiritual awakening. I certainly need not, but must, as a formality, remind you that any other mail reader, if it ever were to exist and it certainly does not, but if it were to exist, would not hold a candle to GMail and certainly be neither properly equipped nor suited for your needs. Truly, it may be malicious software authored by rogue software engineers who are fanatically jelous of the freedom and prosperity that you and I have come to expect. If it ever is to exist, gaze upon it with dirty looks of suspicion. But do not gaze into it too long as you might turn to stone. It has been shown that it is best to refuse, by whatever means necessary comrade, preferably with effective violence, to use a machine that doesn't have GMail running and displayed on screen. This machine is worthless to you and the cause. Remember that highly quality people of your caliber and integrity deserve only the best this world has to offer.

Warning - Over use of GMail may result in obesity, carpel tunnel, and possibly the inability to speak

During your next computer purchase, prioritize your needs as follows:

The current version is 23.4.9v released on August 7, 2007. You must upgrade immediately. All prior versions have been deemed worthless, the source code has been destroyed and it's developers (the 23.4.9u pariah) have been lined up against a wall and shot by an angry mass mob from the 23.4.9v camp. The tapes have been handed over at gun point at archive.org, and everyone, even small children and strangers will laugh at you for using anything but 23.4.9v. In fact, if you don't have it, I want you to go away now. Your prior version sent out clandestined UDP packets to a remote server logging your whereabouts. We know who you are and we know where you live. We also know what you have been up to on the internet. Our sources will smear your name and hand you over to the police if you do not upgrade immediately. It is for your own good. This is your final warning. And frankly, you were lucky to get one; you ought to know better.

The only possible user experience with GMail is that of eternal ecstacy and bliss. The intuitive and easy to understand interface is based on the most accurate and relevant computer science research and theories available. Each new release offers astounding revelations in user design and catalyzes entire new industries. Human enlightenment and cultural maturity can only be attained through enjoying what GMail has to offer. However you need a cellphone to enjoy Gmail. It's a new shitty feature that means people who don't have cellphones can't sign up. What a piece o' shit!

"A long long time ago, in the the dark and desolate catacombs of the internet there shown a single shimmering light - the eye of the phoenix. Under his wings you are safe and by his guidance you are secure. Get ready planet earth for the phoenix has arisen. "

Completely unexpectedly, McGyver's popularity actually waned. Soon the word "Phoenix" returned to its prior use as a trekkies wet fantasy and the land of sun burnt people. The other problem was that "Phoenix Mail" was apparently too mind bogglingly difficult to spell. For instance, net news had "Phenix.Mail.Users", "Pheonix.Mail.Users", and "Phoenix.Mail.Users". The program on the NeXTStation, being very NeXT-like, was called "FeNiX Mail". This certainly would have caused confusion ... if anyone had actually bought a NeXTStation. It turns out, however, that people were able to more effectively spend $25,000 in other places at the time.

To avoid the stupifying chaos of the "oe" phoneme phenomena, the name was changed to something harder to fuck up. By just color cycling the palette on all the artwork, the dev team renamed it to Fire Bird Mail, stressing, and I'm not kidding, this is an actual quote:

Miraculously this quote was stuffed on countless stock white T-Shirts as increadibly mundane Times New Roman black. You can take the magnificant opportunity to bore your friends and ward of potentional suitors by buying one on Ebay for as much as a can of OK Cola. Bur you really ought not insult yourself like that. Bad for the ego, ya?

Back To The Story Over The Name[edit]

Hey, welcome back. Anyway, so the name upgrade was done. Everyone was happy, and went home. Ha ... ha ... ha. People on the "promote" mailing list, being the nitpicky asses they are, pointed out that the connotations of "bird" weren't really that complementary - slow, annoying, craps out a lot - much like Gmail. But it's just a computer program - choose your battles, choose your battles. And lo, some did indeed. It's as if upon rising out of bed, they just vomitted onto their keyboard tears of angst about the name. People repeated themselves so much that a gzip'd archive of this crap compresses at 98%, level 1.

During this time, subscribers to the mailing list dropped 80%. Those that were still on either did not check their email a lot, didn't read it, or were named Richard M. Stallman. Anyway, with such a microbial pathetic mailing list, the value of resale on the open market to advertisers was nil. No more green for the project. Fuuuuuck!

The only sensible thing was done. A ballot was sent out with a list of all known species in existence, in some completely random order, to every developer on the mailing list - including the assholes that left. These lucky people were then asked to rank as many species as they please by order of which they enjoyed eating the most and found the most tasty.

This led to the name of "Human Mail" which, relatively speaking, actually lasted for quite a while.

But as the cascade of attention deficit teenagers messily hemorrhaged over the horizon of cyber space in the mid 1990's, it was found that "Human Mail" was as inadequate as the dev team. TyrellSoft for instance, insisted that their software was "More Human than Human [Mail]". This was so brilliant and effective that to make it not so awesome, people started naming Human Mail whatever they pleased. On some systems it was called "Ice Mail". While on others "Weasel Mail" seemed to suffice. Some decided to obscure the name entirely and just call it "Email Application".

This problem had to be fixed once and for all. Really. The purveyor of all things confusing, the GNU foundation, was asked, out of desperation, to take the reign. After some drama that is much too inane to even give an executive summary of, some official christened the application with the ever so catchy "GNU Mail". They insist that "Gmail" is an aberration and doesn't express the "GNU" as intended by the creators of the name. Luckily, however, very few actually care. And those that do, usually just call it "GMail" to tick people off. Hi-ya! 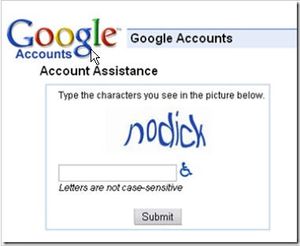 You will occasionally be interrogated with a message such as this.

"GNU Mail is a free elm replacement for the DEC Ultrix, SCO Unix, Solaris SPARC, MS-DOS, and HP-UX operating systems. It has also been ported to the Apple Newton and the System 6. It should be compiled with EGCS 0.9 and requires about 43 Mibibytes of RAM depending on user configuration. It has full support for RFC 821 and RFC 1734."

For historical reasons, the default editor in gmail is ed(1). Using the XML file .gmail/users/<default account>/settings/configuration/gui/config (ver 19.8-20.2) this can be changed to the editor of your choice by changing the value of "UseTextDefaultModificationProgram" to "0" and then add the line "CustomUserModificationProgram" giving it the full path of the editor you would like to use along with the CRC-32 checksum of the file for security purposes. (Example Coming Soon!).

The superior and more flexible method that works for all versions is to inline a lua script in the .gmail.conf naming it EditorStub and then execute gmail in pserver mode using the UDP port documented in your vendors /etc/services (see mkfifo(3) for more information)

Even the finest software documentation may contain oversights and perhaps fail to elaborate how much a feature may effect and change the lives of its users. Many people, with families just like you, work diligently on the accuracy, breadth, and precision of the documentation of GMail. If you however, have found a feature that was not elaborated upon to your satisfaction, please send a self addressed stamped envelope to the PO Box listed on the website. In it, please include a photocopy of your state ID and your passport for verification purposes.

GMail is a quasi-modeless applications with 2 meta modes which can be read about in chapter 11 of the gmail documentation in /usr/share/doc/`gmail --version`/. Here are some of the most commonly used default bindings

In short, it is the greatest thing ever.