Extreme Stamp Licking is a particularly radical sport which came about in the early 21st century as part of the emerging craze for taking ordinary pastimes and making them infinitely more interesting.

How it is played[edit | edit source] 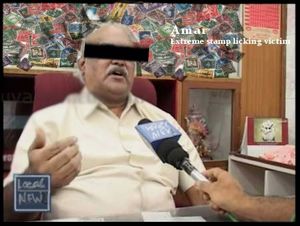 An irritated victim is interviewed in front of his now-ruined collection.

The "extreme" element of the sport gains its reputation in the way it is played. A group of two or more people get together and select the house of an individual that collects stamps. They then hide nearby, staking out at the location until the house is empty. Then, it is a simple race to see who can break into the house, find the person's collection and successfully lick and apply as many stamps as possible to a pre-selected surface.

The person who can find and apply the most stamps is the winner, and receives the satisfaction of being able to witness the loser, who is required to remain in the house until the occupant(s) return, struggle to escape from the now irate stamp-collector. For the loser, the penalties can be harsh – they can often find themself being chased down the street by bespectacled individuals wielding heavy dictionaries. 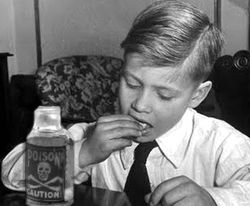 Conceived in 2000 by retired English postman Graham Hick, the sport was originally much more conventional and less danger-fraught. It soon caught on amongst bored youths and a more violent extreme variant emerged in inner-city areas. This variation on the original, which resembled what Extreme Stamp Licking would eventually become to be known as, was much more preferable to Britain's misguided youths as it was less expensive and involved the ever-appealing element of violence.

Despite its many merits, Extreme Stamp Licking does have many negative aspects, evidenced by the events which occurred following the 2002 inaugural unofficial stamp-licking World Cup. Seven collectors were killed, mainly by blows to the knee and nether regions. Another thirteen were injured, most superficially; one is permanently bed-ridden with a sprained wrist.

As a direct result of the problems highlighted by the sport, many countries phased out the traditional "lick and stick" version of stamps, instead opting for new technological advances. Some governments have even eradicated stamps from their postal system completely, such as the UK, who have resorted to sellotaping 50-pence pieces to envelopes in a bid to crack down on stamp-licking addiction. This method failed however when during a postal strike the 50 pence pieces all came off.

Working around the process of licking postage stamps to an unhealthy extreme, the game evoked much controversy in many societies around the globe and was ultimately banned outright worldwide (though still technically legal elsewhere) in 2005. The last global competition was held in the 2004 Olympics.

However, the sport is still practiced "on the underground" (both metaphorically and literally) in many cities by bored gangs. This has led to the founding of the Stamp Collector Protection organisation by local mafia. More unofficially, the invention of anti-thug devices by threatened stamp-collectors have been an effective measure in recent times.