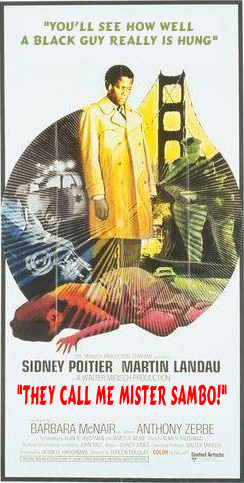 Lynching was the subject of Sidney Poitier's classic 1971 Blaxploitation Movie, They Call Me MISTER SAMBO! a film said to have put back inter-racial harmony by 30 years. (Note: This is a parody of the movie poster for “They Call Me Mr. Tibbs”)
“I got lynched 9 times!”

“I got lynched once too you know, never looked back”

~ Some Old Guy on being lynched

“...BUT I'M NOT DONE YET! CALL RIGHT NOW AND WE'LL MURDER ALL OF YOUR TROUBLESOME MINORITIES FOR ONLY $19.95”

Lynching is the most disgusting and absolutely amusing crime that could ever be committed to a human being.

Lynching was invented by a man named David Lynch AKA Eliot Reis Teh Cucksuckerz, who got the idea as a way to end racism. The original concept was an inter-racial pinata game. Things were horribly misinterpreted when he drunkenly explained to his friends at the Kool Kids Klub. Oh well. At least it's a good excuse to have a picnic!!!

Overview of a Traditional Lynching[edit]

All the white people in the town generally get together the night before, in their best ghost costumes. Then they sing fireside songs outside the black people's house. They generally bring their own fire, and for some reason on a big t shaped thingy. Hmm. Maybe it burns better if the wood is in a T? Anyways, they then invite the black people out and play game of pinata, and everyone has a picnic! Yay! Well... the white people have a picnic...(your mama)

BITCH YOU WASNT WITH ME SHOOTING IN THE GYM

Non-traditional lynching are very controversial among Lynchers (those who try to hit the pinata), with many accusing them of missing the ultimate point. Ultimately, it is a matter of preference, with some lynchers even asking the Lynchees (the pinata) whether they'd prefer multicolored costumes or a more traditional ceremony. Unfortunately, many of these requests end up with someone skipping town and moving up North.

It is generally good etiquette to ask the Lynchee beforehand what kind of lynching they would like to have. Try asking your friends if they'd like to be Lynched. You'll have a lot of fun!