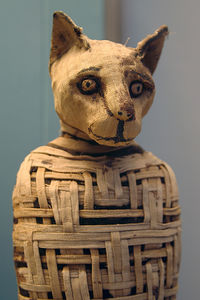 Rick, this is a bad time. A very, very, very bad time. I'm so sorry. But, hey! Listen. You can't be mad at me. You shan't be mad at me! Even though you hired me to babysit your cat, it was not my fault! Now the reason why Mr. Snickermuffins died is not one that could be easily taken for truth. But, in this case, it was what happened. I swear! What are you doing Rick? Stop searching for evidence and knifes! DAMMIT RICK! RICK! I can explain! Just stop panicking, Rick! God dammit! Rick. Listen.

So there I was, watching Teen Moms and all

And Mr. Snickermuffins was sitting beside me, all licking his paws and all. He, too, enjoyed watching Teen Moms with me. Or at least for a little ways through it. I can't blame him though, it was the boring part. And I know you don't like it when Mr. Snickermuffins eats mice because it isn't good for his weight, but the thing is I didn't feed him, ha. Um, yeah I didn't want to not feed him. Its choice was chosen by the kitty gods. You see, you ran out of Fancy Feast for Mr. Snickermuffins. I did have some trouble purchasing Fancy Feast for him too. You must let me explain further, Rick.

It was around three in the morning

And I went to feed him for the first time since I arrived an hour after you left. Oh, real quick let me just say you should of left a day before. Sometime in the afternoon, at least. I mean, I was tired. I had to travel through a snowstorm to get here, Rick. I don't do that for many people.

Anyways, I was so sleepy because of previous activities the day before, which was business work. So I slept in your bed, because it makes me feel more powerful. And don't let me forget to compliment you on how clean your room was, Rick! I mean, my girlfriend doesn't clean that well! Don't worry, I made the bed for you. I mean, what are friends for? If I sleep in your bed, it is my duty to remake your bed.

Ahem! Back to subject. It was around three-thirty in the morning, now, and I just began to get snug for the night. I read a bit of my bedtime story and then shut my eyes.

Then ten minutes later at around a quarter to five, I heard a stomach curling gagging noise. Moments later I left to see what the world that noise was after I, in my pajamas of course, was gagging in your own bed because of the horror the noise produced. I cleaned it up, Rick. I'm not an idiot. When I went to check out the god-awful noise I ended up stepping in Mr. Snickermuffins barf! And guess where it was, Rick? It was on your carpet! Your four-thousand dollar carpet you adored and loved so much! While I was busy looking through the ingredients of the cat food I gave to Mr. Snickermuffins, I realized what I fed him was not cat food at all. It was your leftover lasagne that I can only assume was a month old! I was considering getting some actual food for Mr. Snickermuffins to eat, but I then decided I should let his poor little kitty stomach rest. 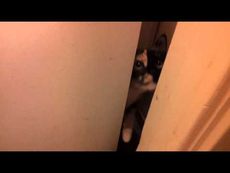 When I returned to bed after that, I would only end up finding Mr. Snickermuffins pestering me to get him some food! I was so tired, so after four of five times of him pawing at my face and making loud and disturbing meows, I shut the door! Even though you left me a note on the table instructing me to let Mr. Snickermuffins roam freely anywhere at all times because you want Mr. Snickermuffins to have the most fun he can have while you were gone. I honestly doubt he missed you. No offense.

Did that do the trick? No! Around 10 minutes later, I found Mr. Snickermuffins inside the bedroom again. I got up and turned on the light next to me, and looked around for a secret entrance in which Mr. Snickermuffins could of entered in by. What did I find? The bedroom door open! He literally whacked the doorknob so many times, it ended up turning. When it turned just enough for the door to be pushed open, Mr. Snickermuffins pushed his little kitty hands in a small door opening and did so. Why the hell would you teach your cat to open your door, Rick?

I locked him in Jiko's dog cage after that so there was no way for him to get out and pester me for food again. What? What do you mean they don't get along fine? The dog and the cat basically were butt buddies! 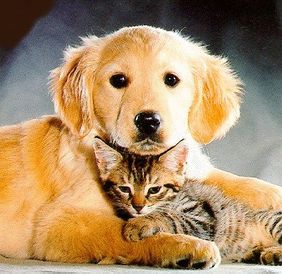 But when I woke up

However, when I noticed you were all out of Fancy Feast, I went to the store to buy some more. After the episode of Teen Moms, of course. Ya know, where I started the explanation.

So I grabbed my jacket, took Jiko out to go potty, grabbed my wallet, and started my not so great trip to the store to buy Mr. Snickermuffins some more of the Fancy Feast that you ran out of.

On the way there

Just then I saw Mariah across the street. She was my old high school sweetheart, so I just had to go say hi to her, Rick! And it took about ten minutes, so don't assume that I wasted time chatting with an old friend!

After the short conversation ended I, once again, resumed by quest to purchase the Fancy Feast for Mr. Snickermuffins. When I was on Harold Street, though, things got out of hand.

I saw this really old lady walking across the street

And she was almost hit by a semi! A big loaded one too! You know, the ones that just happen to commonly appear in the dozens on every street. Though only on bad days when your life is suckish at that particular moment in time, you're running late for work and it's the most important day of your job and possibly even your life, and you decided to walk to work? Those ones? Yeah. But was she hit, Rick? No! I was there to save the day! I was there to push her out of the way of the incoming semi. However, I was hit by the car and received serious injuries that would take a week or two until I was free to leave. How? No, Rick. No, it wasn't a full on collision! Silly goose. I was only partially hit and it wasn't life threatening. I know, Rick, you're worried about me now. But relax. I got out of the hospital with only a little bit of damage about two weeks, later! Unfortunately, the visit to the hospital did nearly force me to become broke.

When I returned to Mr. Snickermuffins 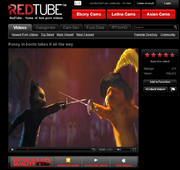 I had no Fancy Feast, and no money, and some major injuries. Mr. Snickermuffins was nearly dying. Luckily, I had some tuna in my bag for him. The thing is, I couldn't find your can opener. So I took my butcher knife and walked towards my bag. Mr. Snickermuffins was unfortunately near it and was already trying to receive the tuna. I could tell poor Mr. Snickermuffins was insane because of near starvation. No, literally insane. Mr. Snickermuffins attacked me! The only way to stop this demon cat from Hell was to stab him multiple times until he died with a knife. I didn't murder him by choice. He even reopened some of my cuts that the hospital warned me to not open!

Don't look at that recording 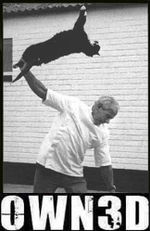 Rick, the recording lies! It isn't what it looks like! Whaaaat? I never said I hate kittens and think they should all be destroyed until extinction! That must have been the television! That's not, "Die-die-die!" you hear, it is, "Why-why-why"! And that isn't me saying, "You did this to me Mr. Snickershit", it is "why does fate do this to me Mr. Snickermuffins, this is shit!" I just slur words, you see. Dammit, Rick! Oh, no! Rick! No that part is very misleading! I didn't punch Jiko! Jiko ran into my fist! I swear! Now this part is also just as misleading, too. Rick, stop crying! RICK! Wait? No, I knew I shouldn't have used a flamethrower to burn him! Shit!

What was that? I can't hear you over your loud crying and sobbing. What? How do I explain myself? You still think I purposely killed Mr. Snickermuffins in hatred?

Featured Article  (read another featured article)
Featured version: 13 December 2012
This article has been featured on the front page. — You can nominate your favourite articles at Uncyclopedia:VFH.