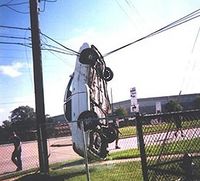 The NSA and CIA are probably behind this.

DETROIT, Michigan -- A recent study is about to radically change the beliefs most people have about car accidents. Conducted by the D.E.A.T.H[1], it proves that all we ever learned about statistics concerning car crashes was until today totally untrue and certainly part of a massive conspiracy which is yet to be revealed (I would not be surprised if NSA and CIA were involved by the way but I’ll let my fellow colleagues journalists investigate this “side” subject).

Anyway. Let’s focus on numbers because numbers are facts and no one can manipulate them.

Fact #1: Alcohol is the major cause for car accidents: FALSE

Based on the study of all accidents to have occurred in North America in 2008, only 32% involved a drunk driver. What does this number mean? Simply that 68% of the car crashes in 2008 were caused by sober persons. So you have twice the chance to die or get severely injured driving your car if you are not under the influence of alcohol. Numbers are even worse if you consider drug usage. Only 7% of the accidents are caused by drug addicts. I'll let you do the math about the other 93%.

Fact #2: Recent cars are more safe than old ones: FALSE 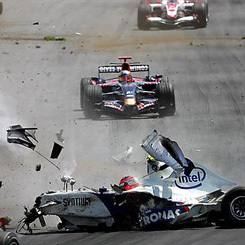 We see here the results of the lobbying from the car industry. They try to make us get a new car more often, claiming they offer more safety with so-called airbags or seatbelts but THIS IS BULLSHIT! Once again, the numbers speak for themselves. In 2008, 87% - yeah you read it right: 87% - of the car accidents involved cars being between 0 and 10 years old. We found cars between 11 and 20 years old only involved in 11% of all the crashes. And even more surprising, only 2% of all the accidents are caused by cars being more than 20 years old. Conclusion: the older your car is, the less you risk having a crash with it.

I have to say this is the part which surprised me the most. Based upon a scientific study in which 1027 persons have participated, it seems that women are much more efficient than men for all that concerns driving. An average woman is able to hold the wheel, shift the gears, talk on the phone, argue with her children in the back seat, put on lipstick, rearrange her hair, listen to her friend in the passenger seat, dust the dashboard, check if the color of the car matches with her dress and look at all the shop windows on both side of the street, all at the same time. Meanwhile a man is only able to perform two actions simultaneously: driving and insulting the woman in the car in front of him, even though she’s only driving in a simulator for a case study. 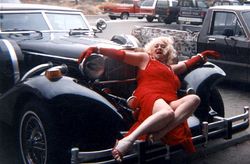 If by chance she's blind, the risk of a car crash with her driving is no more than 0%

Fact #4: Asians cause 66% of all auto accidents. FALSE

In reality, Asians are the best drivers in the world. No person of Asian ethnicity has accidentally been involved in a car crash since the automobile was invented. Any car crashes you will ever see involving Asians are planned attacks on designated targets.

I guess you’re convinced now. Thanks to the D.E.A.T.H., we now know the truth about car accident statistics. And beside all the previous information, this study was also able to determine which category of people includes the most valuable drivers. According to all the numbers, best drivers are without any doubt blind people. In 2008, absolutely no blind drivers (i.e 0%) were involved in a car accident. So if you want to be safe in a car, it’s pretty simple: don’t drive yourself - just go with a drunk, blind lady who drives a jalopy.