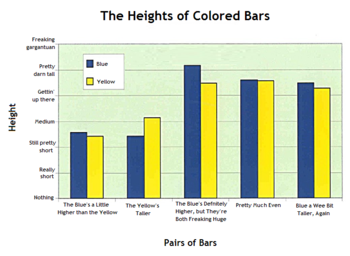 “Information is like the sea: big and it can kill you. Also, it's in an organized pattern.”

~ The Government on information that they don't want you to have

Information is one of the most valuable minerals in the Universe. Even before it was discovered to be more rare than Gold, Silver or Spice, pure information, due to it's amazing truth-relative properties, is probably the safest investment you can put your money in in today's volitile markets.

“Instead of buying Microsoft or Intel or Google, I bought Information! Now I'm the smartest investor in Boise, Idaho! I'm also broke ...”

Information's beginnings are shrouded in mystery and in the document shredders of some government facilities in western Nevada, which are far enough away from Las Vegas so as to not draw attention to themselves, but also far enough away from the Exact Middle of Nowhere as to be nicely inconspicious.

Many historians believe that The Information Age really kicked off around 1777, with the release of the hit country song, "It was Seventeen Seventy-Somethin'", but other historians believe that it had to do with the practice (which started around 1898 with the invention of the original Windows 98) of people (called "factory workers") lining up and doing the same things over and over which they believed would somehow eventually produce a stable economy. They never accomplished this, and no one knows what the heck this had to do with information, but the historical revisionists are presumably working on it.

There was also that dude in Mass effect who sold information for a living. He was called "the shadow broker" or something. That would be a totally sweet wrestling persona cause you'd get come into the ring in a suit and carry briefcase full of wall street journal shreddings that you would use to blind your opponents. Your finishing move would be "the market crash" a front flip flying knee to the groin.

For information to be able to become valuable goods traded between sheepish businessman, it must first take some sort of form. Sir Edmund Pen Island famously declared in 1445:.

And so it was settled, the pen began production shortly afterwards, but was only available to rich aristocrats at first, who would throw lavish parties showing off this inported fancy by writing "You there!" or "What's in the pantry, Matha?" IT was thought that the first game of Pictionary broke out at one these parties in the following decades, however the specific information is still unknown to informationists. Some claiming it to have been established in the late 1400's others state that the notion was introduced as much as 50 years previous without a writing element, but with scoundrels urinating their ideas on the street to which Cockney Rhyming Slang ladies would join in guessing decreeing "It's a helicopter!"

It wasn't until 1543 that the lower classes were able to endulge in such fancies. However, In June of that year, only 5 weeks after the death of Lord Pen Island from Mixamatosis of the liver, ironically contracted at a dinner round his friend Bertrund Tipexford, the idea of an alternative came to light.

A young scholar at the prestigious school of writings and whatnot, named Rupert Hounds-Bugely, put forward the idea of what became the pencil at the Society of Scribbles, he was laughed out of the room. Well he showed them returning the next day and guffawing them out of the observatory, causing them, bound to wheelchairs to roll off the cliff which the observatory was poised to their utimely deaths before the first ever countdown was on. Hounds-Buely could not lend his name to the invention because it would sound fucking stupid,

"Hey Steve! You don't have a Hounds-Bugely. Can I borrow one?"

"Hounds Bugelys down, your time is up!"

"I'll Hounds Buegely you in for March!"

"Is that a Hounds Bugely in your pocket or are you just pleased to see me?"

Exactly what a detestable future we would be spending our present days in, so instead he opted for the name pencil, stealing the name pen but adding the extra -il, for reasons not made up yet. Hounds Bugelely name lives on though, as the common pencil is often referred to as being HB, didn't know what that was about? Huge Balls or something? NO ITS HOUNDS BUXLY! or whatever his names was, feel free to use that to impress your friends, but don't tell them this story for they will have killed themselves long ago.

The first primitive pencil was a distant relative as to what we Intellectoids use today, for a starters it was compiled of cowshide and heather and required 3 men commanding the steam pipes for it to write for any considerable amount of time.

Informationists fiercely dispute the order of the pen/pencil and it divides the profession up to the present day, declaring a view of one or the other in opposition to an establishment could land one in very hot water indeed. Accounts from this time reported of violent rioting, where the accused would have some sort of facial hair added to their face, whether they were in posession of some at the time or otherwise.

For Fairness, this page is totally biased to the order explained above, as it is much more logical.

So with implements with which to express things in an orderly fashion, the road was clear for the brightest minds to apply the trade, so here is the beginners guide to annexing everything from funniest looking rocks to the worlds most ambidexturous mild mannered 1970's African American soul Divas.

So you think you can record information? WRONG WRONG WRONG WORNG WNORG WGORN!! You have to KNOW you can, for only belief of the truth facts will be able to set you free.

Next your weapond of choice, the 1987 Bic excalibur? A fine vintage sir

Now you may come to ask yourself, what am i going to write on?? Consider yourself lucky that paper is in good supply. In the "Inkjet Ages" where paper famine killed half the known/unknown population, scholars resorted to recording information on their bodyparts. Sir Isaac Newton notoriously wrote the first 2 volumes of the Principia on his arms and legs, for documentation purposes he then stood in the British library until the 1960s to serve as proof.

Where was I? Check

Ok Kid, looking good all you need now is some form to take, writing from left to right is a fairly modern invention only being adopted worldwide in 1950's, prior to that each country would use their own system, the germans in one never ending line,the russians from top right to bottom centre to top left and then top right again. And the French in ever decreasing circles, making novels journals particularly tiresome to produce.

Writing like this? Excellent choice, its the law after all. Check

Information? Oh Im sorry is that the time? I have to go make up some kids to pick up from school

Which came first, the chicken or the egg?

Main article: Chicken or the egg

This particular bit of information is one of the most coveted in the information market. But due to the theory of evolution some say the chicken came from a chicken like animals egg. So, the chicken came first. And no, you can't say "But the chicken came out of the egg!" well the egg it came out of was not a chicken egg. An earlier prototype was called, "Why did the chicken cross the road?" but the transparent unstability of that investment soon proved itself in the Great Depression of 28659.5 BC, when it was pointed out by a monkey that, "Everyone knows it's to get to the other side."