From Uncyclopedia, the content-free encyclopedia
(Redirected from Pen)
Jump to navigation Jump to search

For those without comedic tastes, the so-called experts at Wikipedia have an article about Non-lethal weapon.

War and fighting in general have been favourite pastimes for the human race since they first learned how to throw fucking rocks. However, in more recent times, a great many people have been questioning such things, saying that it is morally wrong to kill other people. This has resulted in a great increase in popularity of being-a-pussy weapons. Non-lethal weapons are specifically designed to do as much damage to someone or something as possible without killing it. Depending on the weapon, this damage can be either physical, mental or both. As you can tell, only pussy-ass-bitches use this type of weapon. In fact, only the people who play Modern Warfare 2 could make it gayer.

Non-lethal weapons are usually favoured by Liberals, hippies, women, gays, and girly-men in general. There are several uses for non-lethal weapons, mostly where damage is appropriate but death isn't:

There are several types of non-lethal weapons, each with its own merits and drawbacks.

The pen has long been used as a non-lethal alternative to standard lethal weaponry, and is most useful in that it affords the wielder the ability to write "COCK", "I SUCK" or some other insult of his choosing on the foreheads of enemies he has slain (non-lethally). The pen is historically the better choice of weaponry when faced by a man with a sword, but in recent times there have been several technological advancements in sword-making business. It is no longer advisable to challenge a foe wielding a sword when armed only with a pen – unless you are far, far away and use it as a spear.

The first recorded use of the pen as a weapon was by Oscar Wilde, on Valentine's Day, 1895, after the premiere of his play, "The Importance of Being Earnest", an account of which was published in the local paper the next day: 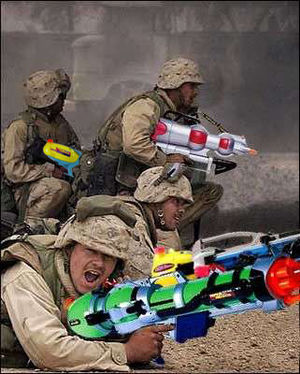 The water pistol is one of the oldest types of non-lethal weapons. Its use has been recorded as far back as the Middle Ages, when people would carve them out of wood and fire them at each other in jest. They went out of fashion in parts of Europe for a long time after that, mostly due to one being used on the Pope during a visit to London in 1647. The Catholic Church immediately outlawed all water pistols, and anyone caught using one was to be burned at the stake as an enemy of Catholicism. In Protestant countries, conversely, use of a water pistol became practically mandatory. King William III of England had his life saved at the Battle of Chipping Sodbury by a member of his personal bodyguard, The King's Own Aqua-fusiliers, who was toting a Superior-soaker 300.

Water pistols have regained popularity in recent times, most likely due to the recent trend of people wanting to do stuff the church doesn't want them to. They were also popularised by the practice of "happy spraying", where one person (usually a drunken youth) would run up to a complete stranger on the street and spray water all over their crotch, giving the effect that the person had urinated on themselves. Water pistols are also used by special peace-keeping forces in war-torn areas, to keep the locals in order without angering them too much. Some say that the great leonardo da vinci used one to fend off ferocious wolves wile holding the famous painting the mona lisa.

The inflatable mallet is a classic weapon used mainly to infuriate an enemy. They often come in many shapes and sizes, but the bigger it is, and louder the squeak when it hits, the more effective the weapon. It was used to great effect at the Battle of Thermopylae by King Leonidas's elite three hundred Spartans to destroy more than seven billion Persians.

The M-16 is one of the most harmful non-lethal weapons, not because of the countries that use it, e.g. the United States, but because it's made mostly of U.S. pride. You can use it to hit people, making it the most non-lethal weapon ever created (short of the U.S. Army).

Rubber bullets were a failed attempt to create an environmentally friendly alternative to "cappin' yo' ass". The mistake was noticed when Holmes (as we shall call him) capped Foo' in the ass. The energetic projectile proceeded to "proxy-cap" other Foo's in the ass before Holmes realized he had acquired "a whole load of beef". Whilst being an effective way of starting gang wars it was by no means "friendly" and certainly not an "alternative" to pumpin a Foo' full of good old lead. After hearing of these intriging events the US commissioned a less-than-lethal weapon named B.O.U.N.C.E., however research has paused as developers are still trying to think of a good backronym capable of toppling the P.H.A.S.R. off of its throne.

Demonstrating the ancient history of the non-lethal weaponry concept, these plastic devices were issued to riot-control ninjas vice throwing-knives.