“And if I snap it down the middle...two pencils!”

~ Rob Alf on the pencil

~ A Pencil Sharpener on pencils 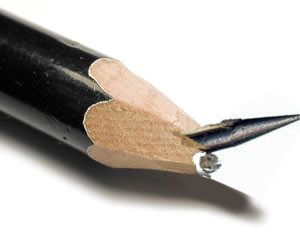 All the pencil has left is a damned sharp point, something that often escapes most of the rest of us.

A pencil was a sharp object once used to make drawings and write words on paper, before the dawning of the Internet era and CAD/CAM. The pencil's coup de grace was the eraser, hidden on the butt end of the pencil. It functioned as sort of a Delete key, and gave the young user practice in rubbing back and forth quickly.

Currently, there are better ways to do everything the pencil used to do. Pencils are now carried merely because they are an object with a sharp point that nevertheless lets the owner appear scholarly rather than threatening. Gordon Liddy advises air travelers how to make an arsenal, using only a pencil and a credit card, which will pass through jetway security and let the traveler defend himself against terrorists when stuck on a plane full of passive Americans. Pencils are a very subtle weapon that editors use to kill themselves. A great suicide tool.

Pencils are good for magic tricks, as they can be made to disappear.

The pencil is closely related to the pen. And the relationship is becoming ever more incestuous, as pencils are now being made in colors, like pens, whereas pens are now on the market with erasers, like pencils.

The pencil gets its name from William Penn, who famously wrote the purchase-and-sale agreement for the western half of New Jersey using the instrument. This fact, and the ability to retroactively change the document after several chumps wearing crowns signed it in pen, explains how he came to own all of Pennsylvania. 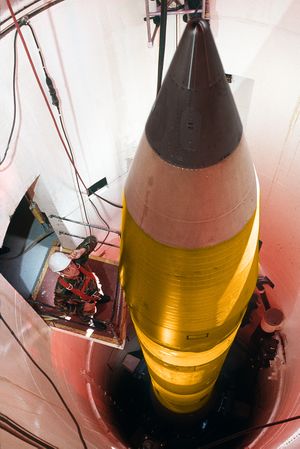 During the Cold War, The United States developed literally thousands of giant pencils to repel the Communist threat.

The United States, due to its large and faithful civil service, was once proudly known as a "nation of pencil-pushers." Every citizen carried a pencil with which to fill out innumerable forms. The ability to erase let the citizen change his mind and let regulations become marvelously confusing.

After the founding of the Soviet Union, pencils won the arms race. The Soviet Union, despite innumerable five-year plans, proved unable to distribute pencils to its people; whereas in the United States, pencils were sold on almost every street corner in most Hoovervilles, alongside apple vendors, for which the pencil made a perfect utensil.

President Bill Clinton not only signed legislation in pencil, but insisted that the legislation itself be written in pencil. This was a key to his governing philosophy of, "I meant it when I said (signed) it." He also used pencils for many other playful purposes when more suitable objects were not available.

Every young American became accustomed to using pencils on a variety of standardized tests. This was at the dawn of the computer age, and the mark-sense reader was invented to read pencil-marks in circles on a form. Consequently, tests became exclusively Multiple Choice, with a system of partial credit that rewarded knowledge but gave a nod to the important skill of guessing wisely.

Such tests, like bar code at supermarkets, increased the productivity of teachers and the accuracy of their grades. This led George W. Bush to fatefully propose that schoolchildren be tested not just to prepare to enter college or law school, but every couple of years, whether they needed it or not. Teachers and students exchanged their pencils for picket signs, and the pencil lapsed into the merely ceremonial object that it is today.

In late 2014, no longer able to compete with the Internet, pencil manufacturers began producing battery powered pencils that could connect to WiFi. This major change was opposed by many people, most over the age of 60. These people claim that battery powered pencils go against the entire meaning of the pencil, and that connecting pencils to the Internet is disgraceful. Many of these people are the same people who opposed the creation of the iPod, Xbox, and Elon Musk. As for the functionality of the battery powered pencil, the current version is able to connect to WiFi, make phone calls, track your ex, and time travel. 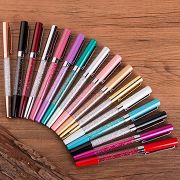 The superior pen. Made in China, of course.

The Pen, like a pencil, is a sharp object used to make drawings and words. While pencils aren't widely used, pens still have a variety of uses in the Internet Age. A lot of people use pens to write their signature (whatever that is) and fill out important forms on paper, since the government doesn't trust the internet. Pencils are unable to accomplish this simple task. Pens have also been equipped with erasers, completely replacing pencils. Pens used to be made from feathers stolen from birds and dipped in the blood of Portuguese, but pens have become a lot better to write with since some guy put a ball on the end of them. Pens also come in a lot of neon shiny colors, which I like a lot. In fact, I think I might go buy myself some colorful pens right now.