From Uncyclopedia, the content-free encyclopedia
Jump to navigation Jump to search
Warning: This will probably make no sense to you.
This article may be hilarious if you are familiar with whatever it pretends to explain, but otherwise you will probably have no idea what the hell is going on. If you can think of a way to make it more accessible, make it so.
Whoops! Maybe you were looking for Wireless network? 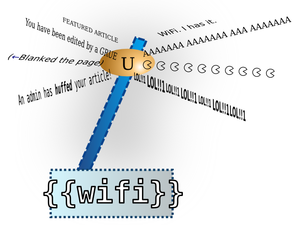 WiFi (pronounced Wi-Fi) or also known as Wire without the electrical fire is a standard of data link transportation between wireless networks via frequencies in the electromagnetic spectrum. WiFi allows computers and mobile devices to access a local network or even the Internet without being wired. It is used as an alternate for running Eejit net cable through buildings by a networking cannon. 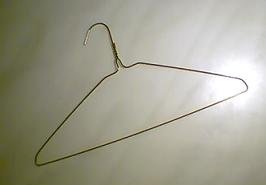 Straightening the wire coat hanger will void the warranty and will not be eligible for repair.

Before the introduction of WiFi, several technologies had been used to implement an easier method to computer networking. The metal coat hanger method was popular choice for wireless networking. When the coat hangers were hung from a coat rack facing in the direction of the magnetic North Pole, it is possible to receive signals by hooking it up to the Ethernet jack of a computer using a device called a bridge. However, the use of this method requires the user to wear a tinfoil hat to protect inadvertent mind control[1].

Other devices or methods, although less popular, used were the Invis-a-net, Packet Pidgin, and sending signals using earthquake tremors. 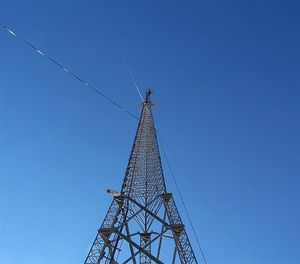 The technology of a WiFi tower may shoot eye beams if necessary to destroy cheap stakes.

WiFi was first established in 1996 by the IEEE. Technicians were fed up trying to get knots out of Ethernet cables and complained to the managers. The managers grumbled and sought a quick solution.

The wireless light bulb was lit. Developers at IEEE worked day and night to create a network system that did not use any cables. Finally on January 5th, the WiFi protocol and technology was made a standard.

Since then, the reception of WiFi has been strong with little noise or interference from neighboring technologies. The transmission of this technology reached a frame burst in North America and Japan, while the preamble in other countries gradually ramped up speed to 54 other countries. Clients who invested in WiFi technology agreed and authenticated that WiFi will be a service set identifier in wireless data communication. WiFi still gains bandwidth today.

There are several inherent problems with using WIFI, especially in small buildings such as that as the family home. Scientists discovered that when no one is using the internet within the wifi area (also known as the 'hot zone') the internet has to spill into somewhere. This is usually out the chimney in most home, however, for those that do not have this convenience windows must be opened to prevent wifi build up. Wifi build up can cause cancer, as found out by Dr. Grog of the University of Southampton. Other problems with wifi are corners, where wifi internet can easily get caught. This problem can easily be solved, and if you find that your internet is slow, a gently waving motion toward the computer can speed the connection up. Newer houses in the UK are made without corners, and instead have rounded edges.

Another problem with Wifi is that its status as a limitless yet valuable resource had led to the advent of douchey guys who go to StarFucks in turtlenecks with their macbooks and drink a tiny $7 coffee while consuming enough wifi to cover the entire country of Africa.

WiFi operates on different levels of channels. The following chart illustrates its usages and similarities[3]:

WiFi can be used by the government to monitor your Internet usage or maybe even more? Get me my tinfoil hat!

WiFi has applications beyond Internet use due to its versatility. Its protocol can be easily adapted to the latest trends without the need of developing an entire new system. WiFi has been extended to refrigerators that automatically receive RSS foods, universal remotes that are even more universal, and to shirts with built-in WiFi music systems.

Recently, WiFi was developed for Cell phones. This allowed people to carry their own cell phones without a long cord. Typically before the use of WiFI, cell phone usage was limited to the length of the phone cord. Any use beyond the length required roaming charges or an upgrade to a increased range subscription plan.