The Universal Remote Control Everything 3000 is a portable device resembling an ordinary television remote control, except that it's about the size of a laptop and needs to be connected to a local nuclear power station in order to run. The beauty (and some say terror) of the Universal Remote Control Everything 3000 is that it can be used to control all the stuff outside the TV too, including (but not limited to), dogs, fridges, bouncy castles and Cliff Richard.

Birth of a legend

The Remote was the brainchild of an individual who for obvious reasons wishes to remain anonymous, because it was actually Rolf Harris, and Mr. Harris knows the true pain of ridicule.

Few people know this about Rolf, but he is obsessed with watching television to the point of losing sleep and mumbling incoherently. He was furiously attempting to repair his broken television remote control one evening by throwing it around his living room, stamping on it and soaking it in Tesco Value Coke, and he was almost ready to give up hope of fixing it.

Suddenly, a random blast of gamma radiation shot out of a nearby budgie with a broken leg, and went straight into Rolf's remote. When he hit the power button a colossal explosion of a sticky red substance filled the room. The sheer scale of what he had actually created dawned upon him. He had in fact inadvertently blown up his dog's head. It seemed that caffeine in the Cola, combined with the gamma radiation had transformed into an ultra-powerful remote battery acid. Rolf buried the dog in his back garden and never told anyone about it. 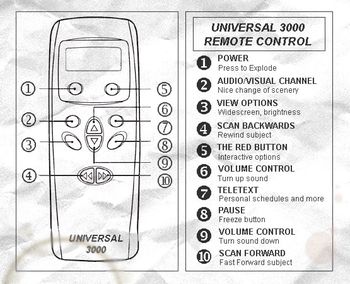 Diagram for the original design of the Universal remote 3000. This particular copy currently resides in the British Museum.

The capabilities of the Remote are startlingly and disturbingly varied. Unlike a conventional remote control, however, for the Universal 3000 to work the subject must be within a five metre range, and a working nuclear power station must be in the vicinity.

Can be used to gain a wealth of information on the selected object/person with a simple press of the red button. Individuals' profiles and personal details such as credit card and pin numbers can all be accessed efficiently after a brief loading period. Then you can put them on 'pause', pop down to the bank, and withdraw all their money before pressing 'play' once more. This is technically theft, but actually possible (or would be if the remote had a play button).

The red button is only available for use at certain times. Users see this when the words 'press red' appear just above the subject's hat. The user can now access a variety of facts and figures. These include sports results, weather, famous birthdays and dark thoughts. Unfortunately on older versions, the red button kills, or euphemistically "turns off" whatever you point at it. For this reason the older version was withdrawn from the market.

Some examples of uses of The Red Button:

Note: performing the following actions using a regular remote's red button can have varied consequences, ranging from being laughed at and ridiculed to being smacked round the head by a large fat man.

It's worth remembering that the red button can be used whenever the red symbol appears. Try walking down your local high street with the remote outstretched. Sometimes even mundane objects such as that old banana peel can be made much more interesting with a bit of background information...

Perhaps the most useful of all the remote's functions, this allows the holder of the remote to render individuals mute. Can be put to practical use in everyday conversation and situations where your mother in law's voice is causing a seizure - hitting the mute button will reduce her to a vaguely shifting bundle of mouth movements. On later models, it is possible to replace her voice with a soothing string orchestra or the gentle and deeply therapeutic sighing of humpback whales.

Simply pointing the remote in the direction of a subject and pushing '>>' makes them go faster. Can be used to speed up old age pensioners travelling painfully and irritatingly below the speed limit. Multiple presses cause them to move faster and faster and eventually shoot out of the atmosphere and into space, trailing fire. It is thought the Universal 3000 could have accounted for as many as 90% of surprise results in horse races and Olympic running events. The massively popular comedian Benny Hill often used this function on groups of women running through fields in their underwear. Later versions allow users to listen to "Yakety Sax" while the function is running. 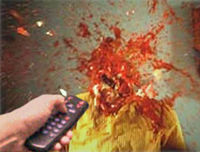 Demonstration of usage of the power button. (NOT TO SCALE)

Helpful to those with low self-esteem, the widescreen function can be utilised to make those annoying friends that eat five Mars bars a day and still remain skinny look much fatter. Fat friends can be made to look like airships, providing mirth for all the family.

The most powerful of all the remote's capabilities, pressing the power button can have untold effects, ranging from spontaneous combustion and SEHS to melting snowmen, television masts mobile phones. Thus, whole systems of communication can be affected immensely by a rogue press of this button.

This also makes the Universal 3000 a perfect household intruder repellant, although I'd hate to be the one cleaning up the mess in your kitchen afterwards.

The only risk is a complete shutdown of local power stations, which will, of course, render your handset useless and might result in a prison sentence. 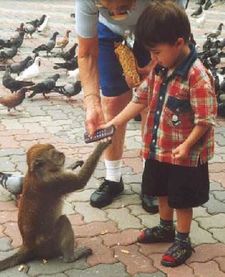 In the wrong hands, the powerful nature of the Universal 3000 can have drastic consequences.

The sheer power of the Universal 3000 means that should the remote fall into the wrong hands, dramatic and sometimes fatal consequences could result.

In 1998, firemen were called to the scene of an unfortunate incident. A senior citizen, returning from the local bingo hall had exploded into flames with no apparent cause. It was later confirmed, however, that a Universal 3000 had fallen into the hands of a juvenile delinquent intent on blowing up a supply van carrying Marlboro cigarettes to a nearby corner shop.

The teenager had the remote confiscated and was given a smack round the earhole by his Dad. This incident highlights the dangers of the fast forward function, which, if overused, can lead to overheating of the subject and eventually combustion. Luckily for the victim, police used the rewind button to reform her. When asked of the incident, the pensioner said that she had no memory of the incident, and indeed, no memory of any incidents, but that she needed to hurry home to take her anti-SEHS pills.

Another drawback of the Remote is that overuse of particular functions can also have some rather disturbing long-term effects. Overexposure to the Long Play/Slow Play function can cause the subject in question to be permanently stuck in Long Play mode. Individuals with this particular affliction can be identified by their rapid limb movements and extremely fast speech, their taste for endless speedcore music and their body language, which becomes similar to that of a small, demented sparrow.

These are, however, not to be confused with individuals on speed such as or Linford Christie.

There currently exist very few Universal 3000s, though at one point in the mid-nineties there were over a million. The outlawing of the remote followed and amnesty, which saw its popularity dwindle. Enthusiasts have attempted to steal the remaining remotes but have met explosive and bloody ends.

The final straw with regards to the legality of the Universal 3000 came when the remote was found to have a fatal flaw - the rewind button was likely to stick at the most inconvenient of times. This led to a spate of freak incidents in which many individuals witnessed people undergoing a process of 'reverse evolution', transforming into cavemen and subsequently primates in front of their very eyes. Critics commented that this should be expected when you ask Tesco to assemble and distribute your product.