From Uncyclopedia, the content-free encyclopedia
(Redirected from Banana Skin Joke)
Jump to navigation Jump to search 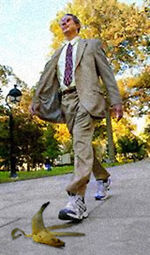 A confident man approaches his doom.

Modern man. He walks with confidence. He wears shoes. He never slips.

The banana is his nemesis.

A man walks down a street, slips on a banana skin and falls over. That's it. The pure form. It might not seem like much in today's laser-powered world of comedy, but when it first appeared in 1913 it was the funniest thing on the music hall scene. It easily beat Jugs Mahony's Spoon Dance and it fended off strong competition from The Singing Duck of Dresden. Today, it lives on in collective memory as an example of primitive early humor, sort of like Benny Hill does, but less frightening.

A woman, in high heels, with a poodle called "Oui Oui", walks down the street, slips on a banana skin and falls over revealing a shocking degree of ankle in the process.

The eternal conflict of the human condition as it bears on fruit related objects.

A man walks down a street and very nearly collides with a lamp post, but just avoids it and turns to the audience with knowing wink. Then he slips on a banana skin and falls over.

When this version was first performed in Leningrad in 1931 it provoked riots and death threats against its neo-realist author, Mikhail Kataev Vassily Nikolaevich Alekseyevich Tsveteava Mandelstam. The addition of the lamp post, it was felt, was an insult to the purity of the Soviet nation. The Russians like their jokes simple, short and with a dash of vodka. In fact, a lot of vodka. Russian comedy generally involves several gallons of vodka, since people will laugh at even Russian comedy when they are drunk enough.

A man is eating a banana. He throws away the skin and then slips on it, thus becoming the master of his own downfall in an ironic and amusing fashion. More amusing than, for instance, shooting himself in the head.

Deep inside a bunker in Arizona, in the 1950s, a team of American humorologists were assigned the task of beating the supremacy that the Russians enjoyed with the Leningrad Twist. They came up with the novel idea of making the man be eating the banana. This emphasises the freedom of the individual for which America is justly proud. In America, if a man wants to slip up on his own banana, he is at liberty to do so and without risk of constant electro-convulsive political re-education.

A man is chased at high speed all around some fields, over mountains, past streams, down roads, through a kitchen and past the post office by a lot of semi-naked women, to the sound of Yakety Sax. The man hides behind a tree. All the women run past. He comes out from his hiding place, runs away, slips on a banana skin and falls over.

Benny Hill's version of the joke. Benny Hill has brought happiness to millions, none of which can be contacted.

A man, who happens to be - and this is important - the head of the International Organization for Banana Safety, is walking down the street, eating a banana. Forgetting himself for a moment, he throws away the skin, which bounces off the side of a rubbish bin onto the pavement. The man then slips on it and falls over ironically.

The head of the International Organization for Banana Safety tells his wife:

Darling, whatever you give me for lunch tomorrow, please, under no circumstances give me a banana. For I am the head of the International Organization for Banana safety, and imagine what they'd say on the news if I was eating a banana in the street and then I slipped on the peel. My career would be in ruins and we could never give our children a private education in assorted fruit dangers. So, absolutely no bananas ok? Not even a little one.

But his wife forgets and packs him a particularly delicious looking banana. The next day, he's walking to work and he opens his lunch box and sees the banana, which looks so nice, plump, yellow and somehow yielding, that he decides to risk it. Then he slips on the peel and falls over. A small group of woodland creatures applauds.

Popular songsmith Nick Cave recorded this joke as a song but he removed all references to woodland creatures and bananas and added a whole bunch of EVIL. 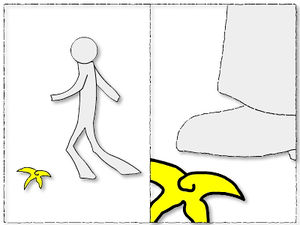 Comedic prop, or agent of evil? You decide...

The head of the International Organization for Banana Safety tells his wife:

Darling, yesterday I fell over when I slipped on a banana skin. That's the second time in two days. I had to buy the silence of a small group of woodland creatures and now I'm in a Nick Cave song, so please, please, I am begging you, please, whatever you give me for lunch tomorrow, please, under no circumstances give me a banana, no matter how delicious it looks. Or even any banana related substitute. I just can't take the risk. I also like oranges.

His wife hears him, but then she's trapped, because a group of aliens, which happen to be shaped exactly like bananas, have kidnapped the cat. They're depending on her to smuggle one of them into the headquarters of the International Organization for Banana Safety, so they can tell the world about the dangers bananas also have to face on the planet Venus. So she absolutely has to give her husband a banana, no matter what he says, or the cat gets peeled. So she smuggles one into his lunch box while he's watching Fox News.

Then, on his way to work, he's feeling a bit peckish and he opens the lunch box and he thinks

...flipping heck, another damned banana, will my cravings never be satisfied?

Just as he peels the 'banana' he hears this tiny little scream and a voice telling him that the government of Venus is going to get him for this, and he is so shocked that he drops the peel and slips on it and lands face first on the pavement, right in front of all these cameras from Fox News, who just happened to be filming the building behind him, where he works, for their special report: How the world was made safe from banana accidents. The scene is replayed again and again on TV sets all over the world and everyone laughs and discusses corruption in serious tones.

And then, suddenly, all these Venusian ships appear in the sky and fire lasers into major cities and these massive tidal waves sweep the globe until there is nothing left but water. Nothing but water all over the globe, except there is this one surviving banana left on it, and as it floats past, it waves to the camera, grins, and says

Boy, am I glad I learned to swim!